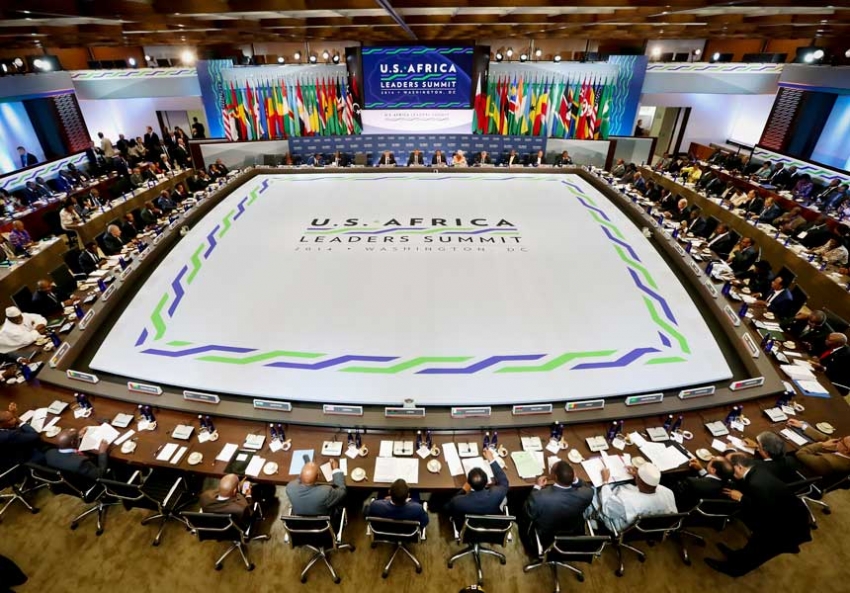 The summit was the largest-ever meeting of African and U.S. leaders. (Chip Somodevilla/Getty Images)

The Neo-Scramble for Africa

Our first black president’s approach to Africa doesn’t feel like a first.

In the new race for Africa, the United States staked its position in early August, when President Obama convened four dozen African heads of state for the first-ever U.S.-African Leaders Summit. The three-day gathering was the most direct expression of the United States’ growing concern with China’s deepening influence on the continent.

According to the Brookings Institution, China overtook the United States as Africa’s largest trading partner in 2009 and has been widening the margin ever since. China’s not acting out of altruism, of course. It has developed an insatiable appetite for Africa’s mineral and petroleum resources.

The U.S. summit was a way to exploit Obama’s connections to the African continent before his exit from office. Obama noted at the summit, “I [also] stand before you as the son of a man from Africa. The blood of Africa runs through our family. And so for us, the bonds between our countries, our continents, are deeply personal.”

Partially sponsored by Bloomberg Philanthropies, a foundation headed by billionaire and former New York City Mayor Michael Bloomberg, the assemblage sought to encourage U.S. corporations to invest and trade in Africa’s emerging markets, while stressing the U.S. government’s commitment to African security and democracy. The stereotypical view of a continent perpetually mired in war, famine, disease and corruption was countered with depictions of Africa as home to six of the world’s 10 fastest growing economies. The summit showcased $33 billion in new U.S. investments from both government and private-sector sources, including $12 billion in direct aid (mostly military).

Not everyone was impressed with the summit agenda. One critic was Prexy Nesbitt, a long-time human rights advocate and expert on African affairs. “We think that people should be at the center of U.S. policy in Africa,” Nesbitt told In These Times. “But the White House summit was about nothing but corporate penetration and militarization.” While Nesbitt acknowledged the historic nature of the meeting, he said countless opportunities were missed to engage with Africa’s real problems, such as land grabbing, rampant corruption, widening wealth disparities, violence against women and increasing xenophobia. The minds of too many African leaders have been fogged by neoliberal logic, he says, “and they assume that markets will take care of everything, even as their people continue to suffer.”

At this forum, the Africa policy of our first black president was roundly condemned. The U.S. smothers Africa under its own agenda, said Campbell, likening the U.S.-Africa relationship to the choking of Eric Garner—a black man from Staten Island, New York, who died in July after a police officer put him in a chokehold. But Africa, Campbell said, would resist.

A major concern at the Howard summit was the burgeoning U.S. military presence in Africa. While its full scope is classified because of the anti-terrorism role of the U.S. African Command, an investigation by the independent online news shop Tom-Dispatch found the U.S. military to be involved “with no fewer than 49 African nations.” The publication notes that officers running America’s secret wars say: “Africa is the battlefield of tomorrow, today.”

In other words, America’s war hawks-turned-corporate scouts are well-positioned to wage proxy conflicts in a bitter competition for increasingly precious resources.

Unfortunately, the new scramble for Africa sounds much like the old one.