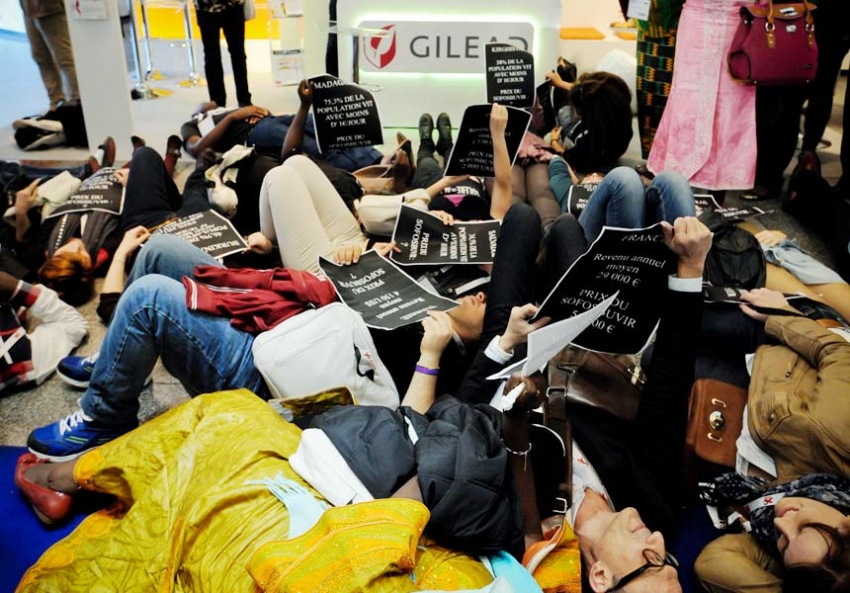 Protesters with Act Up lay on the floor in front of a Gilead Sciences booth to denounce the high price of Sovaldi. (Photo By Sylvain Thomas/AFP/Getty Images)

The Pandemic We Are Ignoring

A possible cure for hep-C comes at a great cost to the sick.

Drugs that cure patients can kill profits. So Gilead Sciences Inc. faced a fiscal challenge with its new drug, Sovaldi, which reportedly cures up to 90 percent of people with hepatitis C, a viral infection that can lurk undiagnosed and transmissible for decades until it causes liver diseases such as cirrhosis and cancer.

Unlike take-forever meds like those for high cholesterol, Sovaldi (sofosbuvir) “represents a finite cure, an important point to consider when comparing the price of a pill or bottle to the lifetime costs of treating a chronic disease,” Gilead spokesperson Cara Miller said.

Considering that point, Gilead set the price at an astounding $1,000 for each daily pill—a total of $84,000 for the minimum 12-week course. That sum would buy a Maserati SQ4 (with $10K in change) or a double-wide mobile home, or feed a thrifty family of four for 11 years. Supplementary drugs can boost the 12-week price to near $100,000. And, depending on the hep-C genotype, some patients—possibly 12 percent in the U.S. and the majority in some heavily infected, poorer countries—need 24 or 48 weeks of daily treatment.

In addition to weighing limits to future profits, pharmaceutical companies also cite past research and development costs to justify high prices. But Gilead spends only 19 percent of its revenue on research, and in any case, sofosbuvir was developed by Pharmasset Inc. at Emory University as “the result of federally funded university-based research,” according to Science Coalition, a non-profit university research group. The drug was nearly market-ready in November 2011 when Gilead paid $11 billion cash to acquire Pharmassett, which had forecast a $36,000 price tag for the 12-week course. In December 2013, Sovaldi hit the market at well over twice that price.

The launch—the biggest ever of a new drug—put Gilead on track to reap morethan $10 billion in 2014 sales, virtually guaranteeing it will quickly recoup its investment. Meanwhile, Gilead avoided hundreds of millions of dollars in U.S. taxes by transferring its patent for Sovaldi to its Irish subsidiary.

Taxpayers not only got gamed by Gilead’s tax avoidance strategy and subsidized its R&D costs, but will end up paying for much of the treatment itself. Because most U.S. hep-C sufferers are poor, in prison or aging boomers, federal programs such as Medicare and Medicaid will foot much of their bills.

Most Americans caught the bloodborne virus from injection drug use or, before 1992, through unscreened transfusions or poor needle hygienein clinical settings. Hep-C can also be transmitted through high-risk sex or simply by sharing a razor blade, toothbrush, nail clipper or rolled-up $20 bill passed around to snort cocaine. About half of infected people have never been tested and, until they develop symptoms, will not know they carry—and can pass on—the virus. Without treatment, they risk slow death and high medical bills—a fact that Gilead cites when defending Sovaldi as a bargaincompared to a half-million-dollar liver transplant.

But it is one expensive bargain. U.S. annual spending on pharmaceuticals could double to $600 billion if Sovaldi is used to treat all 3 million-plus infected Americans—including the 12 percent to 35 percent of inmates who are chronically infected. Treating prisoners with standard care is a constitutionally guaranteed right and an opportunity to curtail the epidemic—but also a multibillion dollar drain on public resources.

Affordability is even more problematic for the world’s 40 low-income countries, where average daily incomes range from $1.09 to $2.82 and annual healthcare spending averages $30 per capita, compared to more than $8,000 in America. In the world’s 100 or so middle-income countries, including China and Brazil, average income spans $2.82 to $34.18 a day, and average annual per capita healthcare spending is about $250. Even if curing hep-C patients and stopping the epidemic were a priority, the price is absurdly prohibitive.

Drug companies recognize that it is not only bad PR to let the poor die while the rich buy a cure—it is also bad business. Better to sell at a steep discount than not at all, especially when rich countries subsidize the market. Enter tiered pricing, a system spawned in the 1990s by protests, outrage and lawsuits over unaffordable HIV drugs. Despite initial industry resistance, tiered pricing has worked to Big Pharma’s advantage by both blunting criticism of price gouging and boosting the bottom line.

With manufacturing costs for a 12-week course estimated at less than $136, Gilead can steeply discount Solvadi in low-income countries and still turn a large profit. In India, where 12 million people have hep-C, Gilead charges about 1 percent of the U.S. price—or $900 for the 12-week course.

Gilead is also striking discount deals with some middle-income countries—a giant market that has two-thirds of the world’s population, 75 percent of its poor, and the majority of its disease burden. In Egypt, where 10 to 13 percent of the population is infected (the world’s highest prevalence), even with a 99 percent discount, providing a 12-week course to all infected Egyptians would cost 2.5 times the country’s yearly total health spending, based on calculations by the humanitarian NGO Médecins du Monde.

In any case, tiered pricing only works (for consumers, as opposed to industry) if rich and poor countries alike implement policies that mediate price differentials among rich and poor people within their borders. Fairness also founders on the ability of countries to negotiate on behalf of the public. Caving to lobbying pressure, the Obama administration signed away the right to negotiate lower drug prices (except in the veterans’ system) in exchange for the pharmaceutical industry not killing the Affordable Care Act. That lack of bargaining power may explain why Sovaldi costs $84,000 for Americans, compared to about $70,000 for the French and $55,000 for Canadians. France has proposed taxing Sovaldi when its cost to the state exceeds $567 million.

With Sovaldi’s potential to break the U.S. healthcare bank, advocates, government and insurance companies alike are demanding more affordable prices for essential drugs. While humans can actually survive without Viagra, lifesaving drugs fall into another category entirely.“Though produced by private companies, they constitute a public good, both because they can prevent epidemics and because healthy people function better as members of society than sick ones do,” declared no less a bastion of capitalism than The Economist.

Sovaldi’s key developer concurs. “It’s a pandemic, and there is an urgent need for cheap, effective, user-friendly anti-[hep-C] oral drugs [for] the sickest and poorest people in the world,” Raymond Schinazi told Poz magazine. “We have a moral obligation to do something about it as quickly as possible.” Schinazi—whose research was supported by public funding through his affiliation with Emory and the Atlanta Veterans Affairs Medical Center—was made $440 million richer from the sale of Pharmasset.

These concerns have prompted Sens. Ron Wyden (D-Oregon) and Chuck Grassley (R-Iowa) to question not only how Gilead set the price, but whether Sovaldi is as safe and effective as touted. The senators cite an Oregon Health and Sciences report detailing research “factors that would lead to a bias in underrepresenting the true nature of adverse events.” The study noted “uncertainty” about whether the high cure rate could be a result of cherry picking trial subjects and data, a too-small sample size, and lack of long-term follow up. The report rated studies on Sovaldi as “poor,” the lowest category. It also found “a high risk of bias” owing to conflicts of interest and issues with study funding: 19 of the 27 members of the expert panel that developed the Sovaldi guidelines had a financial relationships with Gilead.

For my October column, I drove to Canada to save a friend a couple hundred bucks on an Epipen. If In These Times would pony up $84,000 for a first-person account (and if I had hep-C, which I somehow escaped despite a wastrel youth), I could fly to India, buy Sovaldi, cure myself, live nicely for 12 weeks, and still have enough left for that Maserati. Or, in a practice Big Pharma deplores as “leakage,” I could buy enough Sovaldi to treat 100 infected Americans.