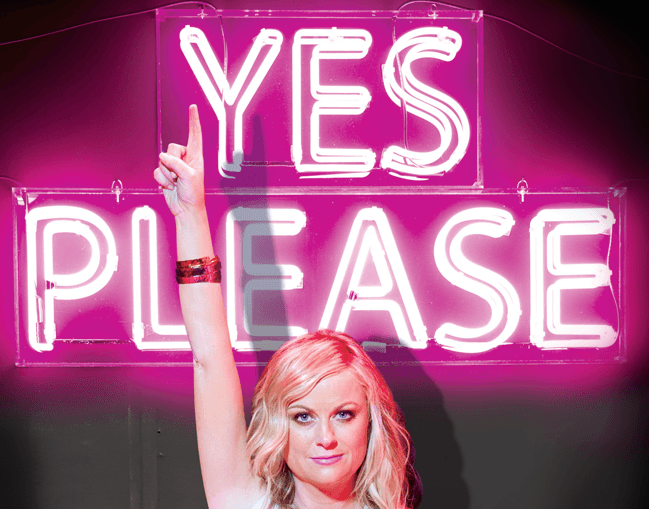 Reading Poehler’s new book Yes Please is like hanging out with a friend who believes you can do anything, and wants you to do much better.

A few weeks ago, Poehler shut down Neal Brennan on his own show when he complained about the pressure to be “awkward and adorkable,” telling him, “This feeling that you’re having right now—which is like, ‘I’m supposed to be all things’—is a feeling that women have every day and have their whole lives."

Amy Poehler has been called, repeatedly, the “nicest person in show business.” That’s a very strange title for a comedian, or, for that matter, a feminist icon.

It’s particularly odd because Poehler has been known to deliver some scathing take-downs. One anecdote from her friend Tina Fey’s Bossypants—in which a male comedian told Poehler one of her bits was “not cute”; she snapped, “I don’t fucking care if you like it” (she “went black in the eyes for a second,” Fey wrote)—has gone from popular Tumblr quote to feminist rallying cry.

A few weeks ago, she shut down Neal Brennan on his own show when he complained about the pressure to be “awkward and adorkable,” telling him, “This feeling that you’re having right now—which is like, ‘I’m supposed to be all things’—is a feeling that women have every day and have their whole lives. … I’m glad you’re finally experiencing it as a white male.”

And, in her new memoir, Yes Please, she relates a story about chasing a man through an airport, screaming, because he’d told her that she didn’t belong in first class. (Sample quotes: “You rich motherfucker! Who do you think you are? You’re not better than me. Fuck you and your fucking opinions, you piece of shit.”) If she’s “nice,” it’s not the kind that requires behaving like a doormat or withholding your opinions.

But there is a genuine big-heartedness underlying Poehler’s work. She seems genuinely committed to the people in her life, and to making the world a better place. You can see it in Parks and Recreation, where her character, Leslie Knope, transformed over the course of the series from an uptight, dowdy bureaucrat to the most beloved person in Pawnee, Indiana, due largely to Poehler’s own intense likability as an actress.

You can also see it in the work she’s done outside of Parks and Recreation: She founded a website, Smart Girls at the Party, dedicated to celebrating young women who “change the world by being themselves.” (Scrolling through the website, you can find sections for girls interested in science, politics and “entrepreneurship.”) She’s become a producer and devoted herself to promoting and creating comedies that showcase great female performers like Comedy Central’s Broad City. She’s one of the more openly feminist celebrities we have, and also one of the longest-running players in the Women In Comedy debate, and she’s had the good grace and good sense to never act as if her obligations to feminism and comedy are in conflict with each other.

That kindness, good sense and emotional generosity are evident throughout her memoir Yes Please—which is a relief, because the book itself is pretty all over the place. There’s not a lot of structure here; Poehler just dips in and out of her life in little, amusing chunks, interspersing bits of early-childhood autobiography with fake sex tips and behind-the-scenes anecdotes about Saturday Night Live with lists of which recreational drugs she’s done. There’s very little in the way of shocking tell-all material, and what there is, you’ve already seen reported in a more sensational way. (The Columbus Dispatch announced excerpts from Yes Please’s drug-use chapter under the headline “Amy Poehler admits pain of drug use, divorce in memoir.” The “pain” in question refers to the fact that she sometimes got hangovers.)

Poehler mentions the recent break-up of her nine-year marriage to Will Arnett many times and makes it quite clear that it was an exceptionally painful and confusing part of her life. Yet, somehow, she manages to say almost nothing about Will Arnett or why their relationship ended. In fact, her chapter “on divorce” is actually a collection of fake proposals for books about divorce, with titles like “Hey, Lady, I Don’t Want To Fuck Your Husband!” and “The Holidays are Ruined!”

So Yes Please is not a portrait of Amy Poehler’s innermost soul, or a collection of her dirty secrets. (Not that we were owed either one.) In fact, it’s not much of a memoir at all. It’s more like a greatest-hits collection, a reprise of some of Poehler’s more notably kind and admirable public statements throughout the years: a little of the open-hearted advice about believing in yourself and being kind that you can find in her Ask Amy web series, a bit of the repping for the Worldwide Orphans Foundation that she’s done over the past few years, a little of the earnest and easy-to-understand feminism she’s always mixed in with her interviews.

There’s not much that’s new. But if you enjoy spending time with Poehler’s voice—and I do—it’s a rewarding, warm experience. It’s hanging out with a friend who believes you can do anything, and wants you to do much better. Poehler knows how to be kind and vulnerable without being meek or wishy-washy. And, while there are plenty of comedians who could tell us about their divorces, or their drug experiences, there are very few who would risk what Poehler does here, when she devotes a whole chapter to explaining how a professional comedian ought to apologize for an offensive joke.

In this chapter—“Sorry, Sorry, Sorry”—Poehler concentrates entirely on her own experience, rather than criticizing anyone else. She did a recurring sketch as the actress Dakota Fanning on SNL. One of those sketches contained a mean-spirited visual joke about a movie named Hurricane Mary in which Fanning played a disabled teen. Poehler did the skit without knowing that Hurricane Mary was a real movie, and, even worse, a movie about a real teenage girl with cerebral palsy. Worst of all, that girl happened to be watching SNL the night the sketch aired.

Poehler received an irate letter from the movie’s screenwriter, Marianne Cooper, and spent years feeling too terrible about the incident to forget about it and too defensive to own up to it.

“I kept telling myself that the only thing I was guilty of was not paying attention,” she writes. “Sure, I was being self-absorbed and insensitive, but who isn’t? Sure, I should have been more on top of what I was saying, but wasn’t that someone else’s job? Didn’t everyone know how busy I was? Didn’t Marianne and Chris take into account what a NICE PERSON I was? My brain shouted these things loud and clear. My heart quietly told a different story.”

Five years after the offense, Poehler apologized. Marianne Cooper did not forgive her. Anastasia Solzer, the girl she’d mocked, did. Poehler reprints Solzer’s letter in full, calling it a “huge gift.”

It doesn’t seem like it should be that big of a deal. It’s just a comedian apologizing for something she did wrong. But in an environment where women are threatened with rape by comedians like Daniel Tosh for daring to find a joke un-funny, or relentlessly harassed online by both comedians and their fans for daring to criticize the political content of a joke, a high-profile comedian writing in praise of apology is not only a huge deal: It’s a radical act.

This is the kind of “niceness” that does not equate to weakness: That is fierce, and strong, and resilient, and even radical. It’s “niceness” that isn’t incompatible with a little feminist outrage, or a sternly worded takedown. It’s niceness that’s fueled by a desire to make the world better.

Amy Poehler may, or may not, be the nicest person in show business. But she is certainly a kind person. And if she’s what “nice” looks like, we could stand to have a lot more people competing for her title.