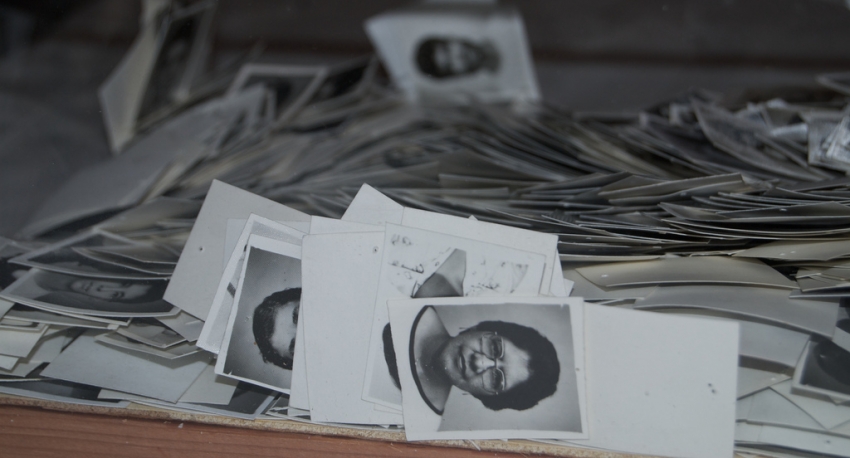 Photos of the six Jesuit priests and their housekeeper murdered by U.S.-supported soldier in El Salvador's civil war—one of many examples of American-sponsored terrorism—at a 2009 commemoration. (Steve Rhodes / Flickr)

President Obama should call our country’s history of supporting insurgents abroad for what it is: U.S.-backed terrorism.

A recent New York Times articles lists three major examples of "covert aid," in Angola, Nicaragua and Cuba. In fact, each case was a major terrorist operation conducted by the U.S.

“It's official: The U.S. is the world's leading terrorist state, and proud of it.”

That should have been the headline for the lead story in the New York Times on October 15, which was more politely titled “CIA Study of Covert Aid Fueled Skepticism About Helping Syrian Rebels.”

The article reports on a CIA review of recent U.S. covert operations to determine their effectiveness. The White House concluded that unfortunately successes were so rare that some rethinking of the policy was in order.

The article quoted President Barack Obama as saying that he had asked the CIA to conduct the review to find cases of “financing and supplying arms to an insurgency in a country that actually worked out well. And they couldn't come up with much.” So Obama has some reluctance about continuing such efforts.

The first paragraph of the Times article cites three major examples of “covert aid”: Angola, Nicaragua and Cuba. In fact, each case was a major terrorist operation conducted by the U.S.

Get a copy of Noam Chomsky's newest book Masters of Makind by donating $30 or more to In These Times today!

Angola was invaded by South Africa, which, according to Washington, was defending itself from one of the world's “more notorious terrorist groups”—Nelson Mandela's African National Congress. That was 1988.

By then the Reagan administration was virtually alone in its support for the apartheid regime, even violating congressional sanctions to increase trade with its South African ally.

Meanwhile, Washington joined South Africa in providing crucial support for Jonas Savimbi's terrorist Unita army in Angola. Washington continued to do so even after Savimbi had been roundly defeated in a carefully monitored free election, and South Africa had withdrawn its support. Savimbi was a “monster whose lust for power had brought appalling misery to his people,” in the words of Marrack Goulding, British ambassador to Angola.

The consequences were horrendous. A 1989 U.N. inquiry estimated that South African depredations led to 1.5 million deaths in neighboring countries, let alone what was happening within South Africa itself. Cuban forces finally beat back the South African aggressors and compelled them to withdraw from illegally occupied Namibia. The U.S. alone continued to support the monster Savimbi.

In Cuba, after the failed Bay of Pigs invasion in 1961, President John F. Kennedy launched a murderous and destructive campaign to bring “the terrors of the earth” to Cuba—the words of Kennedy's close associate, the historian Arthur Schlesinger, in his semiofficial biography of Robert Kennedy, who was assigned responsibility for the terrorist war.

The atrocities against Cuba were severe. The plans were for the terrorism to culminate in an uprising in October 1962, which would lead to a U.S. invasion. By now, scholarship recognizes that this was one reason why Russian Premier Nikita Khrushchev placed missiles in Cuba, initiating a crisis that came perilously close to nuclear war. U.S. Defense Secretary Robert McNamara later conceded that if he had been a Cuban leader, he “might have expected a U.S. invasion.”

American terrorist attacks against Cuba continued for more than 30 years. The cost to Cubans was of course harsh. The accounts of the victims, hardly ever heard in the U.S., were reported in detail for the first time in a study by Canadian scholar Keith Bolender, Voices From the Other Side: An Oral History of Terrorism Against Cuba, in 2010.

The toll of the long terrorist war was amplified by a crushing embargo, which continues even today in defiance of the world. On Oct. 28, the U.N., for the 23rd time, endorsed “the necessity of ending the economic, commercial, financial blockade imposed by the United States against Cuba.” The vote was 188 to 2 (U.S., Israel), with three U.S. Pacific Island dependencies abstaining.

There is by now some opposition to the embargo in high places in the U.S., reports ABC News, because “it is no longer useful” (citing Hillary Clinton's new book Hard Choices). French scholar Salim Lamrani reviews the bitter costs to Cubans in his 2013 book The Economic War Against Cuba.

Nicaragua need hardly be mentioned. President Ronald Reagan's terrorist war was condemned by the World Court, which ordered the U.S. to terminate its “unlawful use of force” and to pay substantial reparations.

Washington responded by escalating the war and vetoing a 1986 U.N. Security Council resolution calling on all states—meaning the U.S.—to observe international law.

Another example of terrorism will be commemorated on November 16, the 25th anniversary of the assassination of six Jesuit priests in San Salvador by a terrorist unit of the Salvadoran army, armed and trained by the U.S. On the orders of the military high command, the soldiers broke into the Jesuit university to murder the priests and any witnesses—including their housekeeper and her daughter.

This event culminated the U.S. terrorist wars in Central America in the 1980s, though the effects are still on the front pages today in the reports of “illegal immigrants,” fleeing in no small measure from the consequences of that carnage, and being deported from the U.S. to survive, if they can, in the ruins of their home countries.

Washington has also emerged as the world champion in generating terror. Former CIA analyst Paul Pillar warns of the “resentment-generating impact of the U.S. strikes” in Syria, which may further induce the jihadi organizations Jabhat al-Nusra and the Islamic State toward “repairing their breach from last year and campaigning in tandem against the U.S. intervention by portraying it as a war against Islam.”

That is by now a familiar consequence of U.S. operations that have helped to spread jihadism from a corner of Afghanistan to a large part of the world.

Jihadism's most fearsome current manifestation is the Islamic State, or ISIS, which has established its murderous caliphate in large areas of Iraq and Syria.

“I think the United States is one of the key creators of this organization,” reports former CIA analyst Graham Fuller, a prominent commentator on the region. “The United States did not plan the formation of ISIS,” he adds, “but its destructive interventions in the Middle East and the War in Iraq were the basic causes of the birth of ISIS.”

To this we may add the world's greatest terrorist campaign: Obama's global project of assassination of “terrorists.” The “resentment-generating impact” of those drone and special-forces strikes should be too well known to require further comment.

This is a record to be contemplated with some awe.