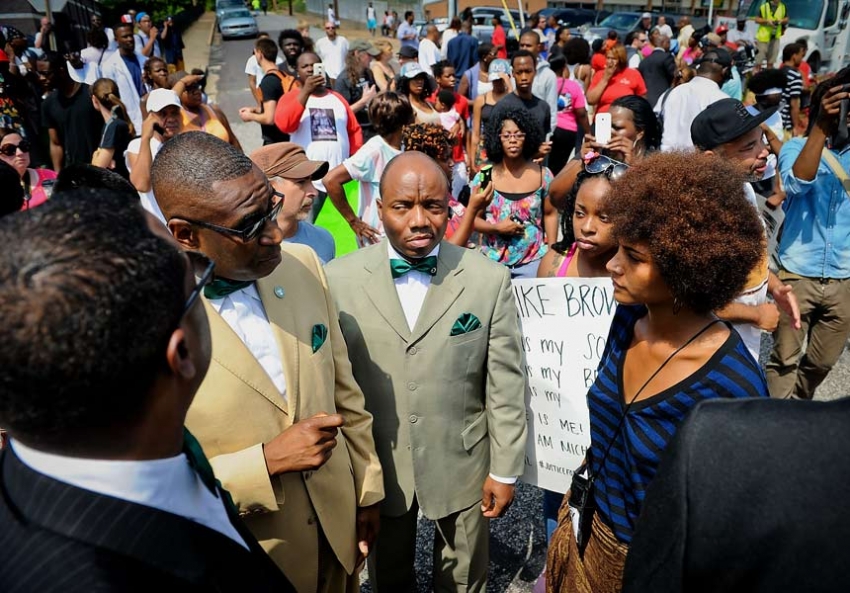 Nation of Islam members speak with Ferguson protesters on August 11, receiving a much warmer welcome than would-be allies from ISIS. (Michael B. Thomas/Getty Images)

Despite what right-wing media may tell you, ISIS has little in common with black Muslims–or black Americans.

'As Muslims and as Americans we will never let terrorist groups or terror leaders falsely claim to represent us or our faith.'

As Ferguson, Missouri, erupted this summer over the police killing of unarmed teenager Michael Brown, radical Islamists tried to co-opt the protests for their own cause. Many right-leaning media outlets jumped on the story, quoting Ferguson-related tweets by supporters of the Iraq- and Syria-based group the Islamic State (also known as ISIS).

Those tweets should not be surprising. Events in Ferguson offer a golden opportunity to showcase the flaws in American justice, and America’s enemies are determined to use it. As Souad Mekhennet, an author and Harvard fellow who has written widely on radical Islamic movements, noted in an August 21 Washington Post column, Muslim extremists have long argued that racism is endemic in parts of the West, and “they’re hoping the Ferguson riots could help recruit black Americans.”

This is an ongoing recruitment effort that seeks to link the legacy of colonialism in the Middle East and North Africa with that of American slavery and Jim Crow. In parallel but entirely separate trajectories, the struggles against these ignoble legacies enhanced Islam’s allure: Islam offered a challenge to the Christian beliefs of both colonialists and enslavers.

Enslaved Muslims were reputed to have instigated many of the 19th-century revolts on plantations in Brazil and the Caribbean, leading Islamic practices to be repressed by slaveholders in much of the United States. Islam’s ability to provoke fear among slave owners formed the basis of its enduring racial appeal for many African Americans. Since at least the time of Edward Blyden (circa the 1860s), Islam has been associated with black militancy in the United States. That militancy became a national specter in the 1950s with the rise of Malcolm X and the group he fronted, the Nation of Islam (NOI). When Malcolm X later broke with the NOI, his adoption of Sunni Islam was interpreted as a move away from radicalism—though these days, it might be interpreted quite differently.

This focus on race differs dramatically from the view of orthodox Islam, which is explicitly non-racial. Still, jihadis have attempted to exploit the superficial similarities. In 2008, for instance, shortly after President Barack Obama’s election, Ayman al-Zawahiri, al-Qaeda’s “second in command,” disparaged the first black president, calling him a “house slave” who “represents the direct opposite of honorable black Americans like Malik al-Shabazz or Malcolm X.”

Al-Zawahiri’s efforts landed with a thud among African-American Muslims. The Council on American-Islamic Relations, the largest Muslim civil liberties organization in the U.S., spoke out in a unified statement against his “insulting” remarks, saying, “As Muslims and as Americans we will never let terrorist groups or terror leaders falsely claim to represent us or our faith.” A group of New York City imams noted that radicalized Islamists have “historically been disconnected from the African-American com- munity generally, and Muslim African Americans in particular.”

This collective rebuttal was considered long overdue. Given their comparable historical grievances, many have speculated (especially on the Right) that there are links between the African-American Muslim community and radicalized Muslims in Islamic nations. These statements made clear that despite similar histories, the two groups have chosen widely differing responses. While there have been signs that the ISIS movement has connected with some black Americans (for instance, Douglas McArthur McCain, the first American killed fighting for ISIS), there is little evidence of any larger links.

But ISIS is casting its net beyond the African-American community and seeking to ensnare young American Muslims of all ethnicities into its swirling mélange of messianic political idealism. In attempts to preempt that appeal, in September a coalition of 120 religious scholars and Muslim leaders released a 22-page open letter scrupulously refuting the ideology of the group.“You have misinterpreted Islam into a religion of harshness, brutality, torture and murder,” the letter states.“This is a great wrong and an offense to Islam, to Muslims and to the entire world.” The purpose of this open letter was not just to debunk ISIS’s theological legitimacy, but to help recast Islam’s image in the public mind. Both are tall orders.