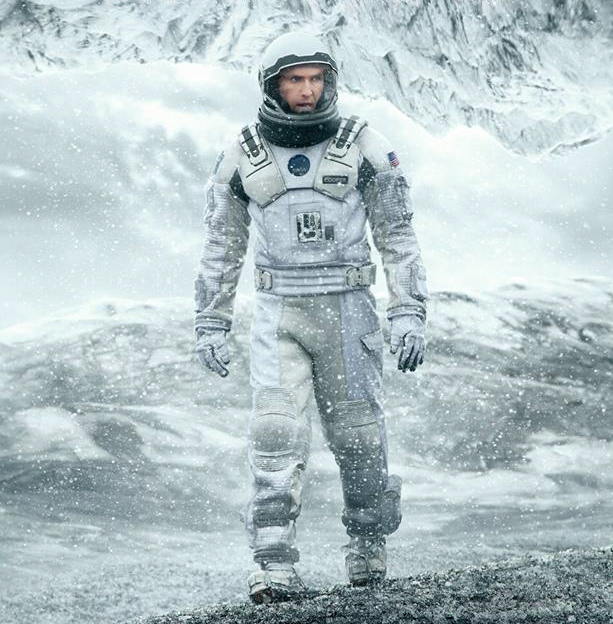 A guy with a dead wife nobly pursues the blowing up of cool shit, in a universe based on iffy science. Sound familiar?

Nolan makes blockbusters. He trades in spectacle. As such, it’s not necessarily wrong that he aims to elicit awe rather than compassion.

I probably don’t need to tell you that Christopher Nolan’s Interstellar is beautiful. Nolan is a master of scenes that genuinely look and feel like visits to another universe: cities that fold in on themselves, in Inception, or a field that sprouts lightbulbs like rows of corn, in The Prestige. In The Dark Knight, he managed to make the Joker, one of the campiest figures in pop culture, into a genuinely frightening villain, largely through good costume design. So if I tell you that Interstellar shows you things you’ve never imagined—ocean waves the size of mountain ranges, a planet-sized ball that holds dozens of galaxies, and what is supposedly the most accurate simulation of a black hole ever created, constructed over the course of a year with the help of theoretical physicist Kip Thorne—I’m only telling you that it’s a Christopher Nolan movie. You know it looks great. That’s why you buy the IMAX tickets.

What you really want to know, I suspect, is whether the movie has Christopher Nolan Disease: a saddening affliction, most common among blockbuster film directors named Christopher Nolan, in which vast, immersive, awe-inspiring worlds are created solely in order to tell the same damn story over and over again. There is a man. He is a sad man. His sadness makes him no less manly. The wife of this man, she is dead now. (If this man be a Batman, who has taken no wife, his parents will be dead, and also, his girlfriend. Yes, a clever twist, friends: They did not marry, but that did not stop her from being dead! Sad.) The man’s sadness, a great struggle conducted in the deep darkness of his soul, fuels his life’s grandest endeavor: The blowing-up of cool shit. In this noble pursuit of the blowing-up of things, the man’s wounds are healed and his masculinity reaffirmed.

Memento, The Prestige, Inception, The Dark Knight Trilogy: Each and every one tells this story. So the real question about Interstellar is not whether it’s beautiful, but whether telling a story that covers the entire span of space and time has caused Nolan to broaden his emotional palette. The answer: Well, sort of. This time, not only is the hero’s wife dead, he’s also on a quest to reconnect with his estranged daughter. Hey, at least Nolan’s picking new female family members for dudes to be sad about. Maybe, in ten years, we’ll get to see a Christopher Nolan movie about a guy who’s really bummed about his aunt.

It’s a shame to see Interstellar fall prey to Christopher Nolan Disease, because it opens with a pretty great story. In a near future that’s just a generation or so away from our own, the Earth is dying due to a mysterious “blight” that’s wiping out crops. People are starving, and those who don’t starve will eventually suffocate, because the death of plant life is causing the atmosphere to run out of oxygen. The soil blows across the landscape, a constant ambient tide of dust that sometimes coalesces into huge storms. Everything is a Dorothea Lange portrait of the Dust Bowl. Most of humanity is dead, and the rest are farmers, whether they like it or not, including Matthew McConaughey’s character Cooper, a former engineer. Intelligence has no place here; learning is pointless; ambition, talent, reason, none of these matter more than wringing the last few ounces of food out of the dying planet. Going to college is seen as wasteful self-indulgence: What could you possibly learn that’s more important than farming? Technology is useful only insofar as it can produce more farm equipment.

There’s a genuinely oppressive sense of progress flowing backwards, in these scenes. Humanity is dying not simply because we’ve encountered great obstacles, but because we’ve given up the love of learning that might allow us to save ourselves. Cooper's daughter, Murph, is sent home from school because she refuses to believe that the Moon landings were faked. (There are also some trademark Nolan crypto-conservative mumblings about evil people who demand “social responsibility,” but let’s be real: If any one political party is going to cause the anti-intellectual dystopia, it’s going to be the one that believes birth control pills are abortion and climate change is a matter of opinion.) If the movie could stick to this message, it might actually be a great film.

And then Matthew McConaughey accidentally stumbles into the headquarters of NASA, which has apparently been conducting billion-dollar missions in total secrecy all this time, and then it turns out that he somehow knows people at NASA despite the fact that he didn’t know NASA still existed, and then NASA offers him the job of flying a spaceship to a distant galaxy in search of a new inhabitable planet within about five minutes (“You’re the best pilot we ever had!” Uh, he was?) and, well, the movie that started out as a stirring defense of human intelligence quickly gets pretty darn stupid. Also, remarkably anti-science: The amazing accuracy of that black hole model is significantly diminished when the movie’s plot revolves around dudes jumping into it. A black hole is a collapsed star so dense that it devours light, warps space, and slows or even stops time. In this movie, people are just hanging out by the edges and hopping in like it’s a big, scary-looking swimming pool. Although to be fair, it may function a little differently from the black holes our scientists have been studying, because this one turns out to be powered (I swear) by love.

Again, it’s not that this stuff isn’t cool (well, most of it). Invoking relativity gives Nolan a chance to play around with time, as he did in Inception. The characters visit planets close to the black hole, where time is radically slowed down, so that every hour equates to seven years in the outside world. Simple mistakes cost decades. There is a real poignancy to Cooper's growing realization that his children on Earth are going to grow up, grow old and perhaps die over the course of his next few days or hours—that he slipped out for a quick adventure and wound up missing fatherhood. But it’s undermined by Nolan’s ham-handed insistence that adventure is the worthier thing, that people (meaning men) must be bold and brave and explore things, that “love” and family are great and all, but ultimately, best expressed through skipping town to go blow up cool shit. The best thing a daughter can do, in this scenario, is to stop holding her father back and give him permission to abandon her, trusting that he loves her anyway, in some way that can only be demonstrated by obscure hooey-involving love-fueled black holes.

Which brings us to the women, where Nolan’s relentless focus on stoic masculine trauma often causes him to drop the ball. It’s not, I think, that Nolan dislikes women: He just doesn’t entirely see the point of them outside of their occasional utility as motivating factors for men. Jessica Chastain, a great actress, plays Cooper's daughter Murph as an adult, and this character—a bright girl in a world that has no place for bright girls, a woman who spends her life trying to save a doomed planet—ought to be tremendously compelling. In practice, she mostly cries about her father. Why wouldn’t she? Murph’s father is the whole point of Murph; she exists to react, not to act.

The other female presence in the picture is a female scientist on the black-hole voyage, played by Anne Hathaway. Her main contributions to science include (1) falling down so that men have to rescue her, (2) trying to derail a mission so she can visit her boyfriend, (3) planning to impregnate herself (I think) with no less than 300 fertilized embryos so as to resurrect the human race one unassisted childbirth at a time, and (4) giving a speech about how Love is the fifth dimension. I like Hathaway, as an actress, but there’s no way to make this stuff not insulting to women. She’s the face of female space exploration, and she’s literally only on the spaceship so that she can go see her boyfriend and have babies.

Nolan makes blockbusters. He trades in spectacle. As such, it’s not necessarily wrong that he aims to elicit awe rather than compassion or that his human drama is a little sketchy and undercooked. At the end of the day, with Nolan, you’ll remember the folding cities and revolving hallways and mountain-sized waves, not the characters’ names. And that's par for the course, with big spectacle movies. Gravity, the film to which Interstellar is being compared, had a pretty thin plot, too–a plot that revolved around an astronaut grieving her dead daughter, no less.

But Nolan's plot isn't just thin; it's almost copy-paste. And with Interstellar, we end up where we always do: With a very sad and manly man crying manly tears to express his heroic grief manfully. We’ve seen it all before; we’re just seeing it in a new landscape this time. And, honestly, that landscape is so big and beautiful and strange that it wouldn’t be wrong for Nolan to consider removing the people from the screen completely, so we can simply sit and marvel at the pictures he creates.