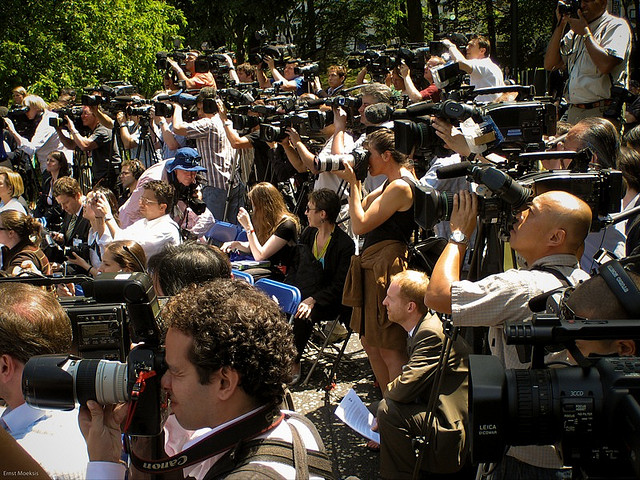 The number of journalists covering local politics is rapidly sinking—to the detriment of our democracy. (Ernst Moeksis / Flickr)

Journalists Aren’t Covering Local Elections. Our Democracy Is Suffering Because of It.

What if you held an election and nobody showed up to cover it? Americans now know the answer: elections with lots of paid ads but little journalism, context or objective facts.

Elections should be about important issues like economic policy, climate change and national security (to name a few). And with a more vibrant local media doing more than just regurgitating poll numbers and reviewing ads, it can be. But that vibrancy requires two things: a genuine commitment and willingness to do the hard work of serious journalism and enough resources to succeed.

On a warm October night toward the end of the 2014 campaign, almost every politician running for a major office here in the swing state of Colorado appeared at a candidate forum in southeast Denver. The topics discussed were pressing: a potential war with ISIS, voting rights, a still-struggling economy. But one key element was in conspicuously short supply: the media.

This was increasingly the reality in much of the country, as campaigns played out in communities where the local press corps has been thinned by layoffs and newspaper closures. What if you held an election and nobody showed up to cover it? Americans have now discovered the answer: You get an election with lots of paid ads, but with little journalism, context or objective facts.

Between 2003 and 2012, the newspaper workforce decreased by 30 percent nationally, according to the American Society of Newspaper Editors. That has included a major reduction in the number of newspaper reporters assigned to cover state and local politics. Newspaper layoffs have ripple effects for the entire local news ecosystem, because, as the Congressional Research Service noted, television, radio and online outlets often “piggyback on reporting done by much larger newspaper staffs.” Meanwhile, recent studies from the University of Chicago and the Federal Reserve Bank suggest the closure of newspapers can ultimately depress voter turnout in local elections.

Colorado is a microcosm of the hollowing out of local media. In 2009, the state lost its second-largest newspaper with the shuttering of the 150-year-old Rocky Mountain News. The state's only remaining major daily, the Denver Post, has had rolling layoffs.

According to Denver Post editor Greg Moore, in the 2014 election cycle the paper had only seven reporters covering elections throughout the state—a 50 percent reduction in the last five years. Challengers in districts that the Post decided not to cover say the media’s decisions about resources may help determine election outcomes.

“It creates a self-fulfilling prophecy. When the local press assumes a race can't be close, then they don't cover it, and then that suggests to voters a candidate isn't credible,” said Martin Walsh, the Republican congressional candidate who unsuccessfully challenged Denver's Democratic representative, Diana DeGette. “Ultimately, that guarantees that the race won't be close.”

Even stories that do get published may have less of an impact without other journalists around to track reaction or do follow-up stories.

“With so many newspapers and news outlets in general having fewer resources, there's no pressure or incentive for candidates to engage with the press and there's no echo chamber that makes candidates feel like they have to respond to anything,” Fox 31 reporter Eli Stokols said. He noted that Republican U.S. Senator-elect Cory Gardner, for example, rarely appeared in unscripted settings with journalists, preferring instead to simply blanket the airwaves with ads.

Andrew Romanoff, the Democratic candidate in Colorado’s closely contested 6th district, said that what little campaign coverage there is often ends up being about the candidates' ads, because that requires minimal time, travel and expense to cover.

“It’s not quite a ‘Seinfeld’ episode,” he said. “It's not a show about nothing, but the coverage has become a show about a show.”

The trouble, of course, is that the show should be about important issues like economic policy, climate change and national security (to name a few). And with a more vibrant local media doing more than just regurgitating poll numbers and reviewing ads, it can be. But that vibrancy requires two things: a genuine commitment and willingness to do the hard work of serious journalism and enough resources to succeed.

Both of those factors are in short supply. That means the most basic ingredients of a functioning democracy will probably remain in short supply, too.