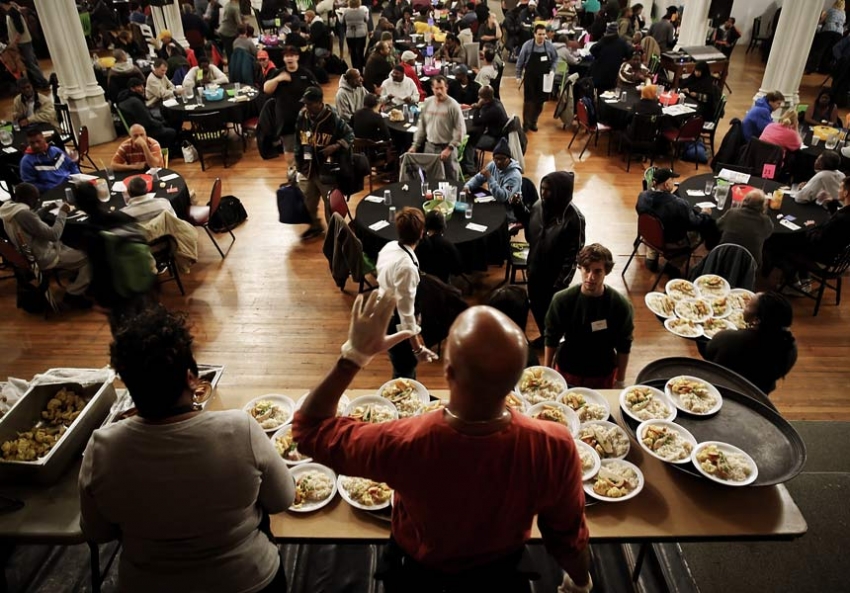 With poverty high and welfare all but gutted, soup kitchens are busy. (Spencer Platt/Getty Images)

We Forgot To End Poverty

Poverty remains at record highs. Is that because welfare reform failed, or because it succeeded all too well?

In September, the Census Bureau released the latest figures on poverty in America. You may not have noticed, because the report made barely a ripple in the media or the midterms. It showed that from 2012 to 2013, the overall poverty rate fell by half a percentage point, to 14.5 percent—the first statistically significant decline since 2006.

The modest turnaround might be cause for hope, but poverty still remains well above the pre-Great Recession rate of 12.5 percent in 2007. In raw numbers, 45.3 million people lived below the poverty threshold in 2013. That’s close to the peak of 46.2 million in 2010, the greatest number in the more than 50 years the government has tracked the data.

That reality stands in stark contrast to the political support for our current policy of  “welfare reform.” The cornerstone of that approach is the 1996 Personal Responsibility and Work Opportunity Reconciliation Act (PRWORA). The law eliminated the previous Aid to Families with Dependent Children program and replaced  it with Temporary Assistance for Needy Families (TANF), which imposed work requirements on recipients, set strict time limits on eligibility for cash benefits, and sanctioned families for failing to comply with program rules.

The effect was dramatic. Welfare rolls fell by around half in the first few years, and employment among poor single mothers increased amid a strong late-1990s economy. “The debate is over,” said President Bill Clinton a year after signing the law. “Welfare reform works.” Conservatives agree: In 2012, Representative Paul Ryan called the program “an unprecedented success,” and now Republicans want to make similar changes to Medicaid and food stamps.

As a social safety net and pathway out of poverty, however, TANF cannot now be regarded as anything but a dismal failure. At best, less than two-thirds of program participants are able to get a steady job when they leave the rolls. Many of those without work have significant barriers to employment, including lack of education or work experience, to say nothing of the scarcity of jobs we have seen post-Great Recession.

Shockingly, despite the recession-induced spike in poverty and the evident level of need, TANF provides even less aid today than it ever has. In the past several years, states have shortened time limits, tightened eligibility rules, and diverted welfare funds to pay for other aid programs in order to reduce their own budget deficits. According to the Center on Budget Policy and Priorities, more than half of all states had lower caseloads at the end of 2013 than at the start of the recession in December 2007.

When TANF was first created 18 years ago, 68 out of every 100 U.S. families with children in poverty received cash assistance. That number has now fallen to just 26 out of every 100. Some families have been disqualified due to time limits, but the evidence suggests that many more are discouraged from even bothering to apply.

It’s worth recalling that the PRWORA was a compromise bill: Conservatives got the emphasis on moral values (“personal responsibility”), while liberals got a limited focus on job training (“work opportunity”). Both sides attempt to “reform” poor parents to push them into the low-wage labor market, but neither side questions the failure of that market to provide families a secure way out of poverty.

Even as unemployment edges downward, millions of Americans remain poor, exposing a basic flaw in the TANF approach: the lack of jobs that pay a living wage.

Indeed, almost 70 percent of poor children in 2013 lived in a family where someone actually worked. A single parent with a child can work a full-time job—40 hours per week, 52 weeks a year—at the federal minimum wage of $7.25 and still not earn enough to lift their family out of poverty. And many poor workers cannot get full-time work: Around 8.2 million or 15.8 percent of part-time or part-year workers were poor, the highest level since 1987.

Nevertheless, across the political spectrum, the law is widely hailed as a success. Caseloads are down, states are spending less, and the problem has disappeared as a controversial campaign issue. We succeeded in ending welfare as we knew it. We just didn’t bother to end poverty.

Chris Rhomberg is associate professor of sociology at Fordham University and the author of The Broken Table: The Detroit Newspaper Strike and the State of American Labor.