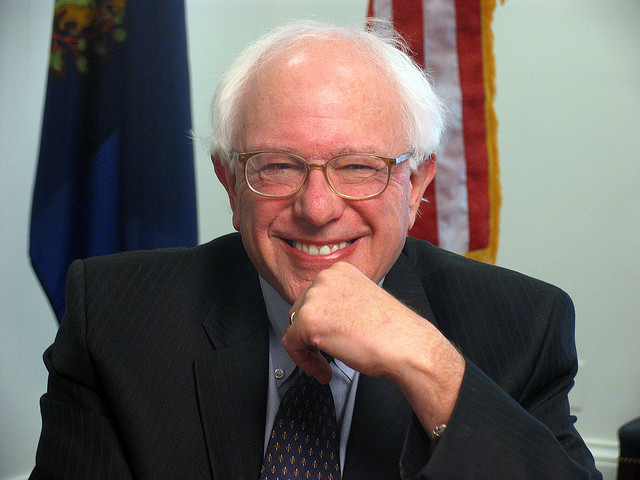 Why Bernie Sanders Needs to Run for President—As an Independent

The corporate capture of both parties, explosion of energy in grassroots movements, and popular disgust with politics as usual make this the perfect moment for Sanders to run outside the Democratic Party.

It’s time for a new course of action—and Bernie Sanders has the name recognition, the resume and the gravitas to be the face of a new national democratic socialist political party that has the potential to change the direction of U.S. politics.

Bernie Sanders, the fiery, independent, populist U.S. Senator from Vermont, has been mulling a presidential campaign in 2016. There is no question about it: He should absolutely run.

Mr. Sanders has the credentials, the charisma and the community support he needs to seize the populist moment we are in and help spark a grassroots insurgency against the billionaire class. Somebody has to take on Hillary Clinton from the Left—otherwise the 2016 elections will be nothing more than two corporate politicians making hollow promises to the American people while selling their souls behind the scenes to war profiteers and Wall Street banksters. And while Elizabeth Warren is also a compelling candidate, chances are at least moderately high that she may not run, opting to play it safe in favor of maintaining good standing with the party’s leadership. And even if Warren does run, her candidacy will not contribute to the building of a genuine third party movement—which is what the Left really needs to do to build long-term independent political power.

That’s why Bernie Sanders must run—and it’s why he should run on a third party ticket, not as a Democrat.

Merely impacting the 2016 presidential elections through the Democratic primaries is too small of a goal given the times we are in, and will not go far or fast enough to move the people and the planet away from the brink of corporate and climate catastrophe. The last thing we need is a firebrand like Mr. Sanders to spearhead a populist electoral charge and raise expectations, only to concede after a few weeks, endorse Hillary and urge his followers back into the folds of the establishment Democratic tent.

It would be disappointing, to say the least, to see a lifelong independent and self-described democratic socialist using the specter of a Republican boogey-man to scare millions of everyday people back into the two-party closet. The truth is, our country’s neoliberal turn advanced tremendously under the Carter, Clinton and Obama Administrations, and it was the Supreme Court that stole the 2000 election from Al Gore, not Ralph Nader.

Neither should Mr. Sanders run only as an independent without attempting to build the kind of organizational and party infrastructure that can live on after his campaign is over, as Nader failed to do in 2004. Mr. Sanders should instead aim higher and strive to change the course of U.S. history by making 2016 the year that an independent third party broke through the white noise and became a permanent fixture in American politics. This should not be done through the Green Party, but through the construction of a new, broad-based democratic socialist party.

Building a nationally viable third party in less than two years will be challenging, but Mr. Sanders has long enough coattails to pull it off. For one thing, the conditions in this country are ripe for this kind of move. Grassroots social movements, from Madison to Occupy Wall Street to #BlackLivesMatter, have been growing steadily since the economic crash in 2008, and have articulated a reform agenda that neither political party appears willing to embrace.

The 2014 midterm elections saw the lowest voter turnout of the modern era, after which the much ballyhooed left turn by President Obama and Senate Democrats turned out to be little more than liberal hype. (See, for example, the party’s capitulation to the corporate right without much of a fight during the recent “Crominbus” budget debate.) The incident serves as yet another example of a political culture that has become thoroughly corrupted by big corporate money.

Voters aren’t stupid. Their apathy in these elections comes from a lack of appealing choices. In a system where neither party is willing to address the bread-and-butter issues that impact us most like jobs, education, housing, health-care and debt, our only options are to stay home or to “vote the bums out,” replacing them with another set of bums we’ll want to vote out, ad infinitum.

That’s why the history of U.S. electoral politics is such a schizophrenic seesawing of power back and forth between two wings of the same corporate power structure. One party swoops into office using the voter backlash against the other’s broken promises as a wedge, and then once in power does very little (at best) to make everyday people’s lives better in material, tangible ways.

Such a system will never be able to solve the staggering number of social problems confronting us. A third party candidacy led by Bernie Sanders, perhaps with a strong running mate like Seattle council woman and fellow socialist Kshama Sawant as his running mate, can give voice to the aspirations of millions of working-class Americans who have been effectively shut out of the governing process by the corrosive influence of corporate power. Their goals should include winning at least a third of the popular vote, concrete victories in dozens of local, county, statewide, and federal down-ballot races, construction of permanent party infrastructure and close collaboration with social movement actors independent of the Democratic Party.

There is already an emerging electoral precedent that suggests such a strategy is not outside of our ambitious reach. Ms. Sawant’s successful campaign in Seattle in 2013 not only elevated a card-carrying socialist to office, it helped catapult (alongside tenacious street demonstrations) the national Fight for $15 movement that has seen several major American cities pass significant minimum wage increases.

The success of Howie Hawkins and Brian Jones on the Green Party ticket in November’s New York gubernatorial race is also strong evidence that the appetite for third-party movement-building is there—if organizers and activists are willing to seize the initiative and take some risks.

The liberal establishment will cry “spoiler,” but their strategy has long proven to be bankrupt. It’s time for a new course of action—and Bernie Sanders has the name recognition, the resume and the gravitas to be the face of a new national democratic socialist political party that has the potential to change the direction of U.S. politics.