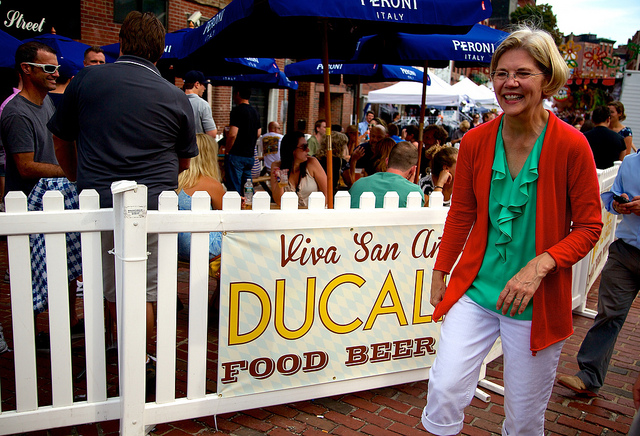 Whether or not she wants to run, the country needs her. (NorthEndWaterFront.com / Flickr)

She’s the only one who can save the Democrats from themselves.

The midterms didn't go so well. The Democrats should have run on economic populism. They should have put forth a coherent vision of where they want to take our country, one that includes a frank assessment of our current problems, and a concrete set of proposals to address them. Instead they tried to run to the right of President Obama by distancing themselves from Obamacare and other administration priorities. One candidate even tried to keep “private” the fact that she voted for Barack Obama over Mitt Romney.

Democrats will never win by running as what Harry Truman called “phony Democrats.” We can only win by contrasting what we believe and what we've done when in power with the beliefs and actions of our Republican opponents. There is no alternative. And there's no one in our party better suited to make that contrast to the American people than the woman who said this:

People feel like the system is rigged against them. And here's the painful part: they're right. The system is rigged. Look around. Oil companies guzzle down billions in subsidies. Billionaires pay lower tax rates than their secretaries. Wall Street CEOs—the same ones who wrecked our economy and destroyed millions of jobs—still strut around Congress, no shame, demanding favors, and acting like we should thank them. …

… Corporations are not people. People have hearts, they have kids, they get jobs, they get sick, they cry, they dance. They live, they love, and they die. And that matters. That matters because we don't run this country for corporations, we run it for people.

That woman, of course, is Elizabeth Warren. And damn if those words don't get me excited. Many people have said this before. I'm one of them. But I'm going to say it again, because it must be said after our losses in the midterms: We need Elizabeth Warren to run for president. Whether she wins or loses, no one else can more effectively reshape the message and policy agenda of the Democratic Party, and there's no better way for her to do so than with the platform of a White House run.

It is a strongly positive development that her fellow senators have elevated Warren to a position of leadership in the Democratic caucus:

Warren's new role, which was created specifically for her, will be strategic policy adviser to the Democratic Policy and Communications Committee, helping to craft the party's policy positions and priorities. She will also serve as a liaison to progressive groups to ensure they have a voice in leadership meetings and discussions, according to a source familiar with the role.

There is already speculation that this higher level of exposure is just the thing a potential presidential candidate would want to have. For me, and for Warren herself, it's far more important that she be crafting policy than that she act, in the words of David Firestone, as an “ambassador” who informs her leadership “what [her] liberal friends will say if we do this or that.” She's not interested in that kind of job, as she explained:

And what she should be (again quoting Firestone) is: “the voice of Democratic opposition to the worst Republican policies.” The lesson to be learned from the midterms (how long ago did Truman make this point?) is that a party has to very clear about what it is for and what it is against. This year, we didn't do either effectively. Democratic Senate candidates especially weren't for or against anything in a substantive way. They weren't “for” President Obama, but they couldn't be “for” Republicans, obviously. The lack of clarity was devastating.

With Elizabeth Warren, you know exactly what she believes, and what she opposes.

There's another reason why we need Elizabeth Warren to run, and that one has to do with Hillary Clinton. In the Washington Post last week, Paul Waldman wrote a terrific piece about why Hillary would benefit from having to face a serious candidate running to her left, talking about Vermont Sen. Bernie Sanders:

Sanders says he’ll center his campaign on economic inequality and the struggles of the middle class, and this is what Clinton needs to address as well. …

If by focusing on the economy Sanders forces Clinton to articulate that story and support it with a specific agenda that she could implement if she wins, he will have done her a great service.

Of course, he’d say he isn’t running to do Hillary Clinton any favors. But the reality is that he would. By critiquing her from the left, he could pull her in his direction in order to satisfy primary voters, which on many issues would wind up being to her advantage. …

A strong Sanders candidacy will do something else: make liberal Democrats feel that their opinions and their concerns are getting a fair hearing in the 2016 process.

If this is true of a Bernie Sanders candidacy (and it is), think about how much more of an impact on all these fronts an Elizabeth Warren candidacy would have. I love Bernie Sanders, but I don't think even he would be offended by the suggestion that Warren would in all likelihood have a much greater chance of being our next president than he does. Furthermore, a Warren candidacy would allow Democrats to have this all-important debate take place with two women at the forefront, something that would only strengthen the party from the perspective of gender.

Elizabeth Warren understands what the Democratic Party must be in order to win elections. More importantly, she understands what our government must do in order for our country to thrive, in order for all of our people to have a real chance to reach their full potential while, at the same time, ensuring that everyone's basic needs are met. There is no better way for her to guarantee that our party adopts her vision than for her to become its leader. That means she has to run for president.