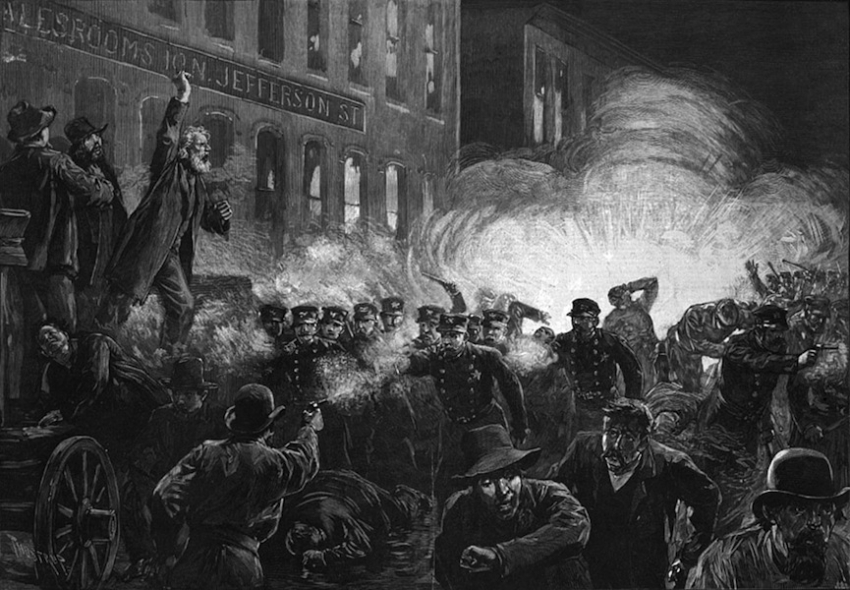 Introducing ‘We Surveil and Protect’: An In These Times Investigation

A brief history of surveillance by the Chicago Police Department.

The Chicago Police Department eagerly tests new tools and strategies to gather intelligence on the city’s population, making it a model for other departments across the country. In an era of high-tech policing, the CPD has been the first to make an arrest with facial recognition technology, to combine its security cameras with statistics-driven policing, and to test predictive crime modeling systems.

The department’s focus on surveillance goes all the way back to its earliest days, in the 1800s—when, amid widespread worker unrest, officers took notes at public speeches and heavily patrolled immigrant neighborhoods. As Sam Mitrani writes in The Rise of the Chicago Police Department, the modern-day CPD was formed in 1855 at the behest of the business elite, with the founding document written on the stationary of the Illinois Central Railroad. Orders to police were explicit: Break strikes and put down riots, monitor working-class neighborhoods for petty crimes and disorderly conduct, and protect visiting East Coast businessmen from thieves.

Throughout the frequent strikes of the late 1800s, the CPD would carry out this mission not only through overt violence against strikers, but also by gathering an ever-increasing amount of covert intelligence.

From the focus on unionists and anarchists in the 19th century, the CPD’s target list swelled during the 20th century to include civil society organizations, perceived political challenges to the Democratic Machine, black activists and anti-war groups in the '60s and ‘70s.

The intelligence unit at the center of such spying, commonly known as the Red Squad, became infamous for its excesses—keeping files on more than 100,000 Chicagoans, infiltrating and antagonizing radical and mainstream political organizations alike, and, in concert with the FBI, assassinating the leader of Chicago’s Black Panthers chapter, Fred Hampton, in 1969.

In response to such abuses, a federal consent decree in 1981 sought to ensure that the department’s investigations into the political and social lives of Chicagoans were constitutional. However, that consent decree is no longer in effect. After years of challenges by city and department lawyers left the decree toothless, a federal judge dissolved it in its entirety in 2009. But a prior ruling in 2001 had already allowed the CPD to resume intelligence gathering and broad investigations.

After September 11, 2001, the CPD, like other police departments, strengthened partnerships with intelligence agencies—working alongside federal agents in fusion centers and the FBI-led Joint Terrorism Task Force—and joined information-sharing initiatives with thousands of other law enforcement groups around the country.

The department is reluctant to discuss, or at times even acknowledge, the new technology, leaving the public in the dark about the extent of police spying. We don’t know the amount of data collected, who is targeted, how it’s used, how widely it’s shared or whether any privacy protections are in place.

That’s why In These Times has launched “We Surveil and Protect,” an investigation into the extent of the CPD’s surveillance activities today.

Through wide-ranging interviews, the study of available public documents and dozens of Freedom of Information Act requests, this series will explore the relationships between the department, federal intelligence agencies and private companies in the lucrative surveillance and data-sharing markets.

In particular, the series will examine the extent to which these technologies and techniques are used on the city’s activists, labor unions and already heavily policed communities of color.

Because this is a live issue for many Chicago communities, particularly at a time when the city is demonstrating against police violence in Chicago and elsewhere, significant findings will be posted immediately. To follow the investigation as it unfolds, go to: http://inthesetimes.com/surveilandprotect.

Tips or experiences with high-tech police surveillance can be sent to joelhandley <at> gmail.com.

“We Surveil and Protect” is a project of the Leonard C. Goodman Institute for Investigative Reporting.