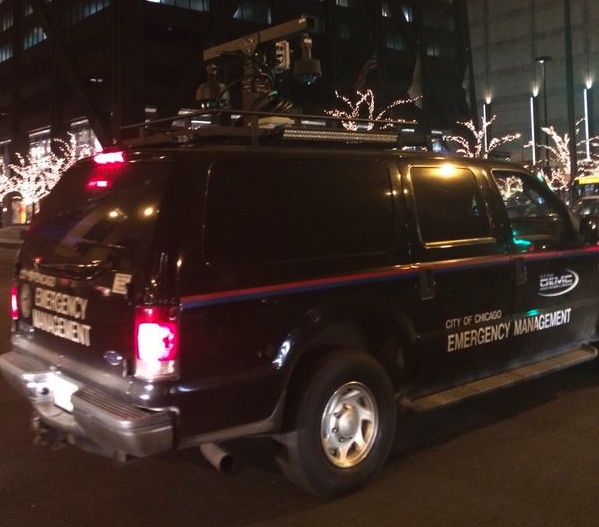 Protester Page May tweeted this picture on December 4 and wrote, "Wtf is this? It keeps flowing the protest. And It messes up my phone when it drives by." Twitter erupted with suspicion that the van contained a "stingray" cell phone surveillance device. (Twitter)

There are numerous accounts by media and the ACLU of police hiding or misrepresenting the use of stingrays from judges, even when they used the devices to locate and prosecute suspects.

“We Surveil and Protect” is an ongoing investigation into the techniques and technology that the Chicago Police Department employs to spy on activists, unions and heavily policed communities of color.

A police officer’s blunder appears to have shed a thin ray of light on one of the Chicago Police Department’s most closely held secrets.

During a Black Friday Boycott march, one of many Ferguson-related demonstrations held that week, a Chicago police officer radioed the city’s “fusion center,” where the city police collaborate with the FBI and the Department of Homeland Security, among many other agencies.

Officer: “Yeah, one of the girls, she's kind of an organizer here, she’s been on her phone a lot. You guys picking up any information, uh, where they’re going, possibly?”

Crime Prevention and Information Center (CPIC): “Yeah, we’re keeping an eye on it. We’ll let you know if we hear anything.”

A member of an online subculture of police scanner enthusiasts caught the call as it came in on Chicago Citywide 6—the police band used for special events—and paraphrased it on Twitter. Protesters seized upon the information, widely sharing it online. Later that week, Anonymous published a video of the call and transcript, dramatized with music and voiceover assurances from President Obama that the government is not listening to citizens’ phone calls.

To activists, privacy advocates, and police observers who have suspected for years that the CPD covertly steals data from cell phones through the use of so-called stingray devices, the officer’s request was a red flag.

StingRays—the brand name of a device made by the military equipment manufacturer Harris Corporation, as well as a catch-all term for similar devices—simulate a cell tower’s radio signal, prompting nearby mobile phones, tablets and similar wireless devices to send the information that would be transmitted to a tower. This includes: each phone’s unique identifying code, known as the International Mobile Subscriber Identity (IMSI); the time, date, duration and location of all calls made to and from the phone; metadata from text messages and emails; and GPS location. In combination with other devices and software, stingrays can also allow real-time listening to cell calls.

The devices were used exclusively by federal intelligence agencies in the 1990s and early 2000s. But after September 11, the federal government began to let local law enforcement agencies acquire and use the devices. Many police departments—including the Illinois State Police—bought stingrays with Department of Homeland Security grants with the purported intention of helping local authorities prepare for terrorist attacks. Since 2002, DHS has given more than $40 billion to local agencies for a range of surveillance equipment and training.

For years, the Chicago Police Department denied having any stingray technology. Only in response to a September 2014 Freedom of Information Act (FOIA) lawsuit by local privacy advocate Freddy Martinez did the CPD release purchase records indicating it has owned stingray devices since at least 2009.

The released documents—two invoices and a price quote from the Harris Corporation—reveal that the CPD bought a StingRay II Upgrade, an Amberjack antenna, a Harpoon signal amplifier and associated software, at a total cost of $152,500.

The purchase of the StingRay II Upgrade, which converts the first-generation StingRay to work on newer cell networks, strongly suggests that the CPD already owned an original StingRay. These early models are the size of a large briefcase and are often kept in law enforcement vehicles to allow for quick, mobile use.

The Amberjack is a disc-shaped antenna that allows the pinpointing of individual phones within the mass of location data from hundreds or thousands of cell signals, while the Harpoon boosts the stingray’s signal to encompass cell phones in a larger radius.

Martinez wanted to know more. Represented by Matt Topic at the civil rights law firm Loevy and Loevy, he filed a follow-up FOIA request and lawsuit demanding the disclosure of how and when Chicago police have used stingray technology, as well as information concerning the storage and sharing of the data collected, and the constitutionality of the practice.

The CPD’s response to the second request is emblematic of the secrecy surrounding the use of stingrays by police across the country. The department hired Drinker Biddle & Reath, one of the largest law firms in the United States. In response to Martinez’s records request, the firm claimed that releasing such records, “to the extent they may exist,” would violate the Homeland Security Act and the Arms Export Control Act, and infringe upon the Harris Corporation’s proprietary information and trade secrets.

During similar disputes elsewhere in the country, the Department of Justice has instructed local police agencies to deny records requests and continue to conceal information about stingrays. Harris now requires police departments to sign non-disclosure agreements before buying or using the equipment. And there are numerous accounts by media and the ACLU of police hiding or misrepresenting the use of stingrays from judges, even when they used the devices to locate and prosecute suspects.

Within such a context, one can begin to understand how a CPD officer’s apparent mistake at the Black Friday march—asking on an open radio channel what the fusion center could gather from a protester’s cell phone—could become such a tantalizing piece of information.

Immediately following his request from CPIC, the officer, referred to as “Mobile 1800” on the radio, was relayed a message from “Car 41,” who had earlier directed other police officers patrolling the march.

Dispatcher: Car 41’s gonna give you a call on your cell phone.

Whether Car 41 was calling to share eavesdropped intelligence or perhaps to chew out the loose-lipped officer, is just one mystery among many that surround the police’s use of stingray technology.

A CPD spokesperson told Chicago’s NPR-affiliate WBEZ that the device was not used during the demonstrations. But then, with all the potential muzzles in place—from the Department of Justice, from Harris, from the CPD itself—who's to say what a denial means?

Tips or experiences with high-tech police surveillance can be sent to joelhandley <at> gmail.com.

“We Surveil and Protect” is a project of the Leonard C. Goodman Institute for Investigative Reporting.