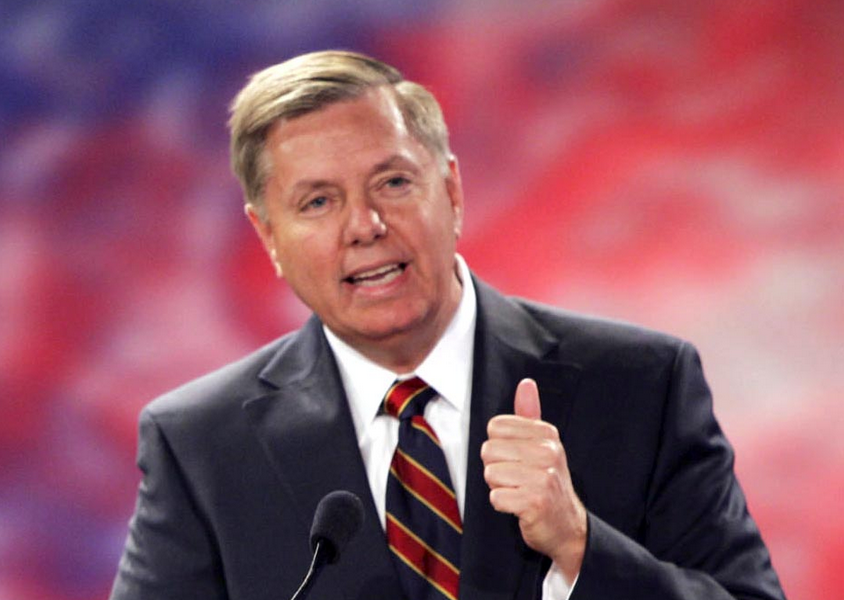 The South Carolina senator’s charge that President Obama is to blame for terrorism is based on no evidence—and only serves to stoke fear among Americans.

By suggesting that President Obama does not share that desire to keep us all safe, Sen. Graham is—quite unintentionally—playing into the terrorists’ hands by speaking the language of fear.

Terrorism can be defined as the use of violence, or the threat of violence, to achieve political goals. Terrorists use fear to achieve their goals. When we take action based on our fears—or ask our elected officials to do whatever is necessary to make us safe—we “play right into the [terrorists'] hands,” as Bruce Schneier puts it.

It is easy to make these observations during a period of (from our perspective, at least) relative calm. But when an attack occurs—like the Boston Marathon bombing in spring 2013 or the horrific and undoubtedly terrifying attacks on the satirical magazine Charlie Hebdo and elsewhere in France recently—it is harder to control our fear, and easy to be guided by it. And it is tempting for elected officials seeking to gain political advantage to exploit these fears.

That’s what Sen. Lindsey Graham (R-SC) seems to be doing by speaking the language of fear as he responds to the terror in France. On Fox News last week, Sen. Graham blamed President Obama's approach to terrorism for “getting a lot of people killed,” warning that “it's just a matter of time” before the U.S. is attacked again at home, as long as President Obama continues the same approach. Sen. Graham emphasized that this is a “religious war” with terrorists and faulted President Obama for failing to describe it in these terms.

While I believe Sen. Graham (like the rest of us) is sincere in his desire to keep Americans safe, this is outrageous, irresponsible stuff. By suggesting that President Obama does not share that desire to keep us all safe, Sen. Graham is—quite unintentionally—playing into the terrorists’ hands by speaking the language of fear.

Juan Cole, a history professor and Middle East scholar at the University of Michigan, has observed that the terrorists responsible for murders in France last week were likely launching a “strategic strike, aiming at polarizing the French and European public ”—and, I’d add, at the American public. As Cole explains, most of the 5 million Muslims living in France are secular and utterly uninterested in supporting terrorism or political violence of any kind (a fact which Sen. Graham somewhat confusingly acknowledged, stating that terrorists are “a minority within the Muslim world”).

However, if the terrorist attacks can succeed in driving a wedge between 1) French Muslims who are loyal to the country and reject violence and 2) the majority, non-Muslim population in France, in Cole's words, terrorists “can start creating a common political identity [for Muslims] around grievance against discrimination.”

Surely this is the last thing Sen. Graham wants. But he is unwittingly lending support to this task by speaking of the terrorist attacks in religious terms and foolishly describing anti-terrorist efforts as “a religious war.”

President George W. Bush understood why using terminology like Sen. Graham’s is a mistake. As President Bush wisely observed in 2002, “ Ours is a war not against a religion, not against the Muslim faith.” Does Sen. Graham believe that President Bush also put the U.S. in danger by, like President Obama, refusing to paint terrorism as a religious war?

It is similarly irresponsible for Sen. Graham to blame  President Obama for “getting a lot of people killed.” No government official, no president, can stop all terrorist attacks. This was true during the Bush years, as well as the Obama years—and it was true both on the day of the terrible 9/11 attacks and afterwards.

Other terrorist attacks occurred under Bush’s presidency after 9/11—the anthrax attacks; the thwarted shoe bomber—not stopped by intelligence efforts, but by active passengers; a shooting at an El-Al ticket counter in Los Angeles in 2002. There is no evidence to support Sen. Graham’s charge that President Obama is to blame for terrorism. His statement serves only to stoke fears among Americans.

What’s more, it is absurd for Sen. Graham to charge President Obama with being soft on terrorism, asserting that the president has avoided being tough because, in Graham’s words, Obama is worried “he may offend somebody.” If anything, the President has overstepped his constitutional bounds by unilaterally authorizing military operations against ISIS without congressional approval  and ordering the targeted killing without judicial hearing of a U.S. citizen who the executive branch unilaterally concluded was a terrorist leader.

Terrorism is meant to scare people. It is effective in this regard. What we can do, and what our elected officials can do, is to refuse to be controlled by fear—as millions of marchers declared last Sunday in Paris and elsewhere. Sen. Graham is surely concerned about the safety of innocent people in the U.S. He would do well, however, to consider whether his groundless charges against President Obama will make anyone safer.

Chris Edelson is an assistant professor of government in American University’s School of Public Affairs. He has written two books on presidential power, and recently wrote a book chapter describing the problem of constitutional failure in the United States.