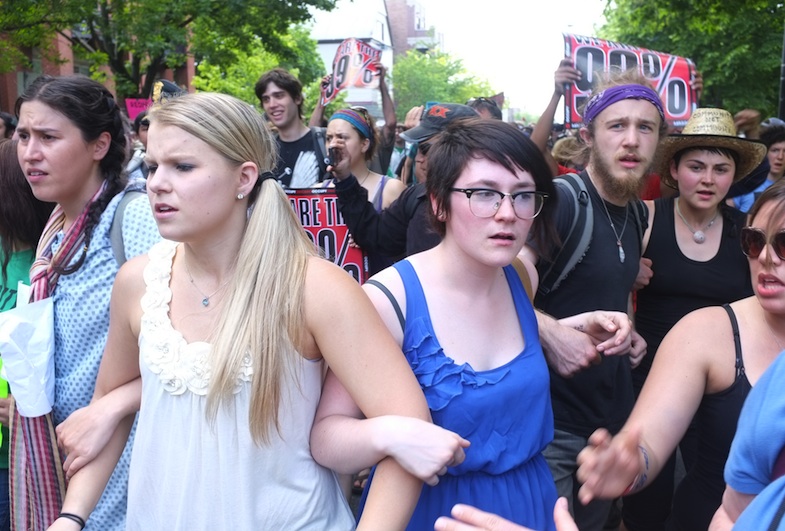 Protesters at the NATO Summit in Chicago on May 19, 2012. (Bartosz Brzezinsk/Flickr/Creative Commons)

In the lead-up to the 2012 NATO Summit in Chicago, federal agents teamed with local police to find and interrogate suspected anarchists.

When a protester was arrested by the CPD for a 'violent outburst' at an Occupy Chicago event, FBI agents interrogated him separately from police, asking if he was part of any 'Anarchist type groups' or had been 'invited to attend any meetings relating to G-8/NATO.'

“We Surveil and Protect” is an ongoing investigation into the techniques and technology that the Chicago Police Department employs to spy on activists, unions and heavily policed communities of color.

Newly released documents give hard evidence of an amorphous FBI investigation into the political lives of Occupy participants, one apparently animated by a belief that adherents to the political philosophy of anarchism are prone to criminal activity.

Following the protests of the May 2012 NATO Summit in Chicago, rumors and reports abounded of local police and FBI agents raiding apartments, infiltrating meeting places, and questioning activists—particularly anarchists, or those appearing to identify as anarchists—in the months leading up to the summit. A number of the firsthand accounts of encounters with the FBI and Chicago police came from Occupy Chicago activists, who housed out-of-town protesters and planned many of the weekend’s actions. The existence, if not the full extent, of the Chicago Police Department investigation was confirmed during the trial of three young summit protesters dubbed the NATO 3. In testimony from the undercover police behind the arrests, it emerged that plainclothes officers with the CPD Intelligence Unit had visited coffee shops, restaurants and concerts to try to find anarchists discussing the summit.

But the FBI, which has long regarded anarchists as a domestic terror threat and monitored events like the G8 and World Trade Organization meetings, has never confirmed investigating anarchists in advance of the NATO Summit. And a document trove released in December 2012 about FBI monitoring of Occupy protests around the country didn’t include any mention of Chicago.

Now, three FBI documents released to independent journalist and In These Times contributor Yana Kunichoff in October 2014 in response to a Freedom of Information Act request—published here for the first time—indicate that the agency gathered intelligence about Occupy Chicago general assemblies, and coordinated with local police to find and interrogate suspected anarchists.

One of the documents, an October 2011 Potential Activity Alert titled “Anarchist Advocates Adopting the St. Paul Principles for Occupy Chicago,” suggests that law enforcement either electronically surveilled Occupy Chicago general assemblies (GAs) or had an informant there.

The St. Paul Principles are a code of conduct for protesters developed at the 2008 Republican National Convention and adopted by Occupy Chicago in advance of the NATO Summit (local activists now call them the Chicago Principles).. They seek to limit public criticism of other protesters’ actions and oppose giving any assistance to law enforcement.

An FBI agent apparently found the introduction of the principles to the GA by an Occupy participant significant enough to warrant a report. The Potential Activity Alert, which includes the text of the principles, was shared with the highest-ranking agents in the FBI’s Chicago Division, as well as the Chicago Police Department, the CPD-DHS fusion center, and Law Enforcement Online—an information-sharing network between the FBI and police across the country.

Claiming “sensitive source information,” the report does not disclose how the FBI observed the GA. The description of the Occupy participant as an “individual involved in anarchist activity” suggests, however, that the FBI had been previously tracking the subject and made note of his political beliefs.

A second document, a seven-page interrogation report from November 2011, shows how concerned the FBI was about the prospect of Occupy activists protesting the upcoming NATO Summit

When a protester was arrested by the CPD for a “violent outburst” at an Occupy Chicago event, FBI agents interrogated him separately from police, asking if he was part of any “Anarchist type groups” or associated with “individuals in the Anarchist movement.” They also asked if he had ever been approached “to participate in any illegal activity related to anarchist extremism,” to be recruited “into an anarchist group,” or “invited to attend any meetings relating to G-8/NATO.” (The G8 Summit was originally scheduled to be held alongside the NATO Summit in Chicago, until President Obama moved its location to Camp David.) The subject responded that he was not part of, nor ever asked to take part in, any such groups or activities.

An administrative note that prefaces the report shows the FBI’s elastic logic to justify investigating people with anarchist beliefs while maintaining that it is not violating the First Amendment. It states that the subject’s “inclusion [in the report] is not intended to directly or indirectly associate the protected activity” though “it is possible the protected activity could invite a violent or otherwise incendiary reaction towards the subject individual or others in retaliation.” In other words, a subject may freely practice or believe in anarchism, but because other people might hurt him or others for doing so, the FBI may freely spy on anyone suspected of being an anarchist.

The note adds that if “no such [violent or criminal] reaction occurs,” that “no further record” will be kept. Why this report still exists two years later is unclear, especially as the individual denied any association with anarchist groups. The information included in the seven-page report deals primarily with the subject’s transient lifestyle and history of mental illness.

The FBI withheld eight additional pages, which it argued would “disclose techniques and procedures for law enforcement investigations or prosecutions.”

The third document, three unclassified pages of a 30-page report from March 2012, shows the level of cooperation between federal and local law enforcement agencies—even outside the city of Chicago—and offers further evidence of the FBI’s obsession with finding anarchists amid Occupy activists.

After the suburban Naperville Police arrested a man for “causing a disturbance” on an Amtrak train out of Chicago, they tipped off the FBI that the subject “was involved in Occupy Wall Street,” was heading to Nebraska “to meet up with other like minded anarchists,” and planned to return for the NATO Summit. Under later joint questioning by FBI agents and Amtrak investigators, the subject “refused to elaborate” on his plans and said he would not return for the summit.

As a whole, the documents also bring up issues around the FBI’s cooperation with FOIA requests. Open records advocates routinely criticize the FBI for its lengthy delays and outright denials in responding to FOIA requests. When investigative journalist Jason Leopold filed a FOIA request with the FBI in 2011 seeking documents about Occupy Wall Street, the agency said that none existed. In response to a FOIA request by the Partnership for Civil Justice Fund later that year, the FBI released 112 pages of documents. At the time, the PCJF called the release the “tip of the iceberg,” filing an appeal demanding the agency release more records of the FBI’s files on the Occupy Movement, but there has been no update in the two years since.

The delay of the release of the documents to Kunichoff until October 2014—more than two years after her initial request—and their rampant redactions give credence to such criticisms. The documents provided here weren’t released to Leopold and the PCJF, despite being arguably within the scope of their requests. Additionally, the FBI’s response to Kunichoff stated that the agency did not search its indices when fulfilling her request—a common tactic the FBI uses to limit the documents turned up by a request.

The agency’s admission that it did not undertake a truly exhaustive search—along with the numerous reports of FBI activities during Occupy Chicago and the NATO Summit—suggest there are still more documents to be found.

This investigation is funded by the Leonard C. Goodman Institute for Investigative Reporting.