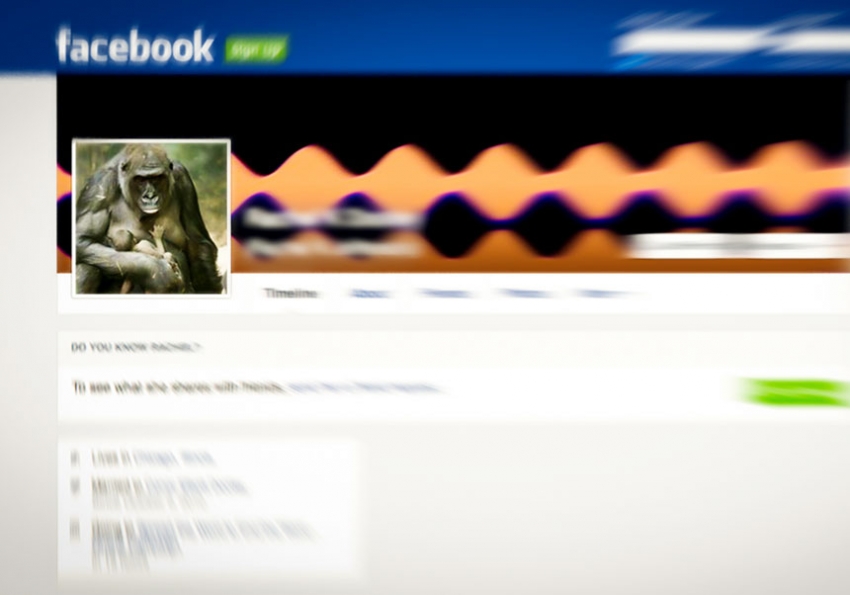 One way to resist Facebook's data-gathering: Pretend you're a gorilla.

Big Data Is Watching You

Your decision to click—and even the amount of time you spend reading or watching—is a piece of data for which the advertiser will pay good money.

What are we prepared to give up in the name of convenience? Throughout Jacob Silverman’s capacious study of the world we’re in and the world we’re making—or rather, allowing tech companies to make for us—it’s demonstrated repeatedly that billions of us are happy to surrender our privacy to save a few keystrokes. Why not log in to that other website with your Facebook or Twitter or Google ID? Why not use your real identity and photograph, with a record of your movements, all across the web? You have it on Google’s word that they’re not “evil”; what could be the harm?

Silverman’s new book, Terms of Service: Social Media and the Price of Constant Connection, does a thorough, if sometimes long-winded, job of explaining what the harm is and what it could become. He begins with an analysis of the philosophy, variously termed “techno-utopianism” or “cyber-libertarianism,” that drives the major social media companies. The ideology should be familiar in essence, if not in name—we’ve been soaking in it for the past decade. Media theorists, long before the advent of Facebook, were calling it “the Californian ideology.” It’s what happens when youthful rebelliousness and a countercultural, anti-authoritarian spirit meets gobs of cash and untrammeled power. It’s the myth—tirelessly peddled by optimistic tech, business and culture reporters and embraced by the customers who line up for new gadgets—that a corporation that calls its headquarters a “campus” and equips its offices with slides, snacks and free daycare is something other than a capitalist entity, with motives other than profit.

To be fair, the big tech companies—Google and Facebook are the stars here, with Twitter, Tumblr and LinkedIn singing backup—do have goals beyond their bottom line. They want to do the kinds of things that beauty-pageant contestants want to do: cure diseases, end terrorism, go to the moon. They share a disdain for government—Mark Zuckerberg is committed to the idea of “companies over countries”—but also share a zeal for surveillance.

For Silverman, the harm of social media is both specific and philosophical. It turns journalism into a clickbait race, for instance, but it also radically changes our concepts of privacy and identity. He considers the fate of those who are chewed up and spat out by the Internet’s nano-fame cycle (nobody gets 15 minutes anymore), whose embarrassing or self-aggrandizing antics, captured on video, do the rounds and attract a quick, overwhelming torrent of derision or rage. But while we might shrug our shoulders at the fate of an Antoine Dodson or a Taylor Chapman (respectively a viral hero and villain), Silverman argues that we should be aware of the numbing and alienating consequences of the viral instinct. Not only does it frequently make clowns of those who are seriously disadvantaged, and destroy reputations and careers, it also molds the larger media world in its own image. Hate-watching a two-minute video of a reality show contestant’s racist rant is a sign that you’ll give attention to this kind of content—and the site that hosts the video, beholden to its advertisers, traffics in your attention, not your intelligence or humanity.

Headlines have always been composed to grab attention, but now they can gather intelligence too. Your decision to click—and even the amount of time you spend reading or watching—is a piece of data for which the advertiser will pay good money. As Silverman describes it, the urge to gather endless data about all of us—from our spending habits to the pace of our heartbeats—is a huge, lucrative industry, driven by the fantasy that correlation is causation, that because you did X activity, you’ll buy Y product.

It may be foolhardy to make predictions about the fast-evolving tech world, but Silverman offers some chilling evidence that the world of “big data” is beginning to affect the choices available to us. Some healthcare companies will lower your premiums if you use a fitness-tracking app (and share that data, of course). Data about what you eat and buy is increasingly being used like your credit score, to determine if you are worthy of that job, that car or that home.

So what? A good citizen who eats her greens and pays her bills has nothing to fear! And if she worries that some misstep—glancing at an unsavory website, running a red light, suffering a computer hack—will damage her, she can just pay protection money to one of several companies that exist to safeguard their clients’ online reputations. Silverman has no solution to these linked problems, of course, since there is far too much money driving this brave new world and far too little government will to resist. Mass surveillance is the present and the future. But if information—meaning data points—is corporate power, then knowledge and critical thinking may be citizen power.

Silverman is too cautious and self-conscious a thinker to inspire a revolution. Instead, he advocates a kind of lowlevel “social-media rebellion”—messing with, rather than rejecting, the digitally networked world in which we live. Putting up a cartoon monkey as your online avatar might not feel like much of a blow to the Facebook assault on privacy, but it’s an annoyance to the booming facial- recognition industry—and perhaps a few million determined annoyances can disrupt the techno-utopia in favor of the common good.