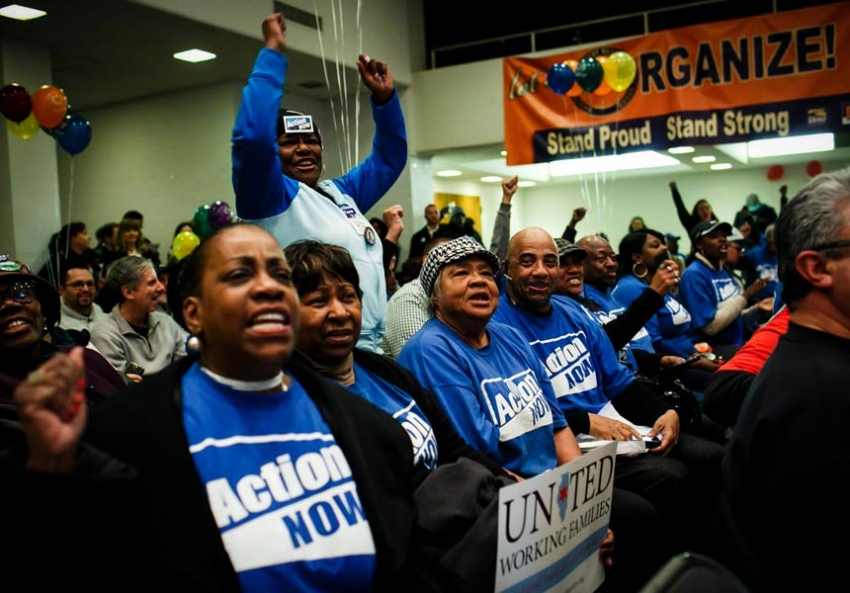 Mayor 1% wasn’t the only winner in April.

If Chuy hadn’t run, we wouldn’t have the Progressive Caucus we’re about to have.

Chicago Mayor Rahm Emanuel, nicknamed “Mayor 1%” for his unabashed embrace of corporate-friendly governance, was reelected by a comfortable margin on April 7. Progressives nationwide who had been following the race eagerly after challenger Jesus “Chuy” Garcia defied expectations, forcing a runoff, were crushed. But is all lost in Chicago? Or could other election-season campaigns and political experiments, carried out by the city’s grassroots movements, inspire progressives tired of “lesser evilism”? In These Times hosted a panel to parse the gains, losses and lessons of the Chicago election, with Amisha Patel, executive director of Grassroots Illinois Action; historian and journalist Rick Perlstein; and Carlos Ramirez-Rosa, a 26-year-old who will be the first openly gay Latino member of Chicago’s city council.

Obviously, Chuy’s loss was a major blow to progressives. Were there any silver linings?

AMISHA: If Chuy hadn’t run, we wouldn’t have the Progressive Caucus we’re about to have. Rahm was busy saving himself; he was not trying to think about saving anyone else in city council. Every single Progressive Caucus member won reelection, and we’ve grown the caucus.

Was Rahm chastened by the runoff? Will he be backing off at all?

RICK: No way. Rahm is not about to become a nice guy. He’s going to say, “Okay, $30 million wasn’t enough this time; next time, I’ll try $70 million.”  And he’ll try to crush progressive aldermen like Carlos.

How much progressive policy do you expect from the new council?

CARLOS: To my count, there will be 12 of us on the Progressive Caucus—almost double the size before the election. But the vast majority of council members will still be with Rahm Emanuel. He still has his rubber stamp. But one story that was missing from the campaign was that Rahm did not step in and save his allies. My opponent, Rey Colón, for example, voted with the mayor 96 percent of the time, yet received a relatively small amount of money from his super PAC. If Mayor Richard M. Daley wanted to go after someone like Scott Waguespack, an incumbent progressive council member, he would have recruited a candidate years ago and flooded the ward with precinct workers. That’s not how Rahm governs. There’s a very strong argument to be made when going to colleagues in the city council, to say, “It’s in your self-interest to join us.” We can honestly say to people who stood with the mayor, “When you’re in trouble, he’s not going to be there for you—he’s going to cut you loose.”

AMISHA: The way we engaged in these elections was based on our history of engaging with progressives in the city council. Leading up to the 2007 elections, the big fight was over Walmart and whether or not they would be forced to pay workers a living wage.  Labor got nine pro-living wage aldermen elected and kicked anti-living wage folks out. But then labor went to focus on this guy named Barack Obama who was planning to run for president, and we didn’t have any infrastructure left to hold those newly elected aldermen accountable. Now, many of them are nowhere near progressive. So the big challenge became figuring out how to hold those council members we do elect accountable to our ideals. After this election, there’s an incredible base of organizing that can be built upon. Grassroots Action Illinois was one of the founding organizations of United Working Families, an independent political organization, along with Action Now, Chicago Teachers Union and SEIU Healthcare Illinois-Indiana. During the election, UWF knocked on about 400,000 doors, made 250,000 phone calls and mobilized 5,500 people to support Chuy’s campaign. We’re going to continue to build on all those conversations. We don’t have a clear roadmap on how to do this. But if we don’t figure something out in this window, right now, we’re going to lose the momentum, and things will be that much harder in four years.

CARLOS: I can’t tell you how many people on election night told me, “It’s all up to you now, Carlos.” But it’s all up to us, right? Because I am nothing without people out there in the street. So let’s not give an inch. There’s $8.9 billion in city hall. Money is there; they’re just not investing it in our neighborhoods.

One idea is to make UWF a vehicle for a third party in Chicago, right?

AMISHA: Yes. Right now, this city has a one-party system, and that party, the Democratic Party, has become too aligned with the corporate agenda. So we’re thinking about how we can build an alternative that is much more aligned with the values of the folks in our neighborhoods and communities. We know we want to have a clear ideology—that it’s not just about electing the lesser of two evils, but figuring out who will really stand for the issues that we care about.

RICK: Organizing progressive infrastructure for the long haul is very exciting and is something that the national Democratic Party doesn’t understand. In Washington, people described this election as a proxy fight between Hilary Clinton and Elizabeth Warren. That makes no sense at all. In reality, this is something that could provide a model for other cities and other states: an actual, ground-up transformation of the Democratic Party that could pay dividends in 10, 20, 30 years—in the same way that the organizing on the Right, after Goldwater lost in 1964, paid dividends from the 1980s to now. The political press in Washington is going to keep missing that story.

Did the city’s patronage machine play much of a role in this election?

CARLOS: The Democratic patronage armies of the past do not exist. That means you and 30 of your neighbors can take over your ward. I’m totally serious. If you have a vested interest in seeing the type of politics you want played out on a national level, go knock on your neighbors’ doors. The field is wide open.

Carlos, talk a bit more about your campaign. Are there any lessons that you think other anti-austerity candidates should take from it?

CARLOS: I ran on a platform of “putting our neighborhoods first,” which was about making sure that government resources are used to the benefit of the people, as instructed by the people. We would go to doors and say, “There’s $8.9 billion in city hall and our alderman and mayor are giving that money to big campaign contributors while we don’t have money to fix potholes on the street or for our schools. And as your alderman, I will make sure that our neighborhoods come first. It’s our money—it belongs to us.” We started campaigning on this message with no polling, just a sense that this was where Chicago is at and this is the platform that I want to run on. There were a lot of campaign consultants that said, “That’s a horrible message. You need to talk about constitulent services,” things like fixing potholes. And I would say, “I am talking about constituent services—the lack of them because of this austerity budget.” If I had just said to voters, “Hey guys, I’m going to fix the potholes,” they would have said, “There’s no money. We have to tighten our belt.” And the message worked, without compromising our strong progressive values.

Mayor Rahm Emanuel has earned a reputation as anti-union, but the majority of unions in Chicago either backed him or stayed neutral. Why?

AMISHA: That divide is unfortunately not new. It’s complicated. The role of the Chicago Teachers Union in the larger political landscape cannot be underestimated. There’s a reason why Karen Lewis got so much support: because she was very clear about issues of income inequality and taking on the mayor when no other labor leader would. For a black woman, in particular, to take on that fight was huge. So often, we see “concession bargaining,” where the assumed starting point is, “How much are we going to lose?” rather than redefining the moment to be about how we win gains in bargaining that are totally outside of our contract—which is what CTU and SEIU Healthcare are starting to do. Their demands are much bigger than breadand-butter issues. Other unions need to step forward and take on more militant fights. People seem to be happy to let CTU do that work, but that’s a problem. Also, we’re really interested in engaging with rank-and-file workers, including unions whose leadership endorsed Rahm. We know many union members aren’t where the union leadership is when it comes to issues like supporting Rahm. We can’t step back and say, “Well, I guess we’re not going to talk to all those thousands of workers.”