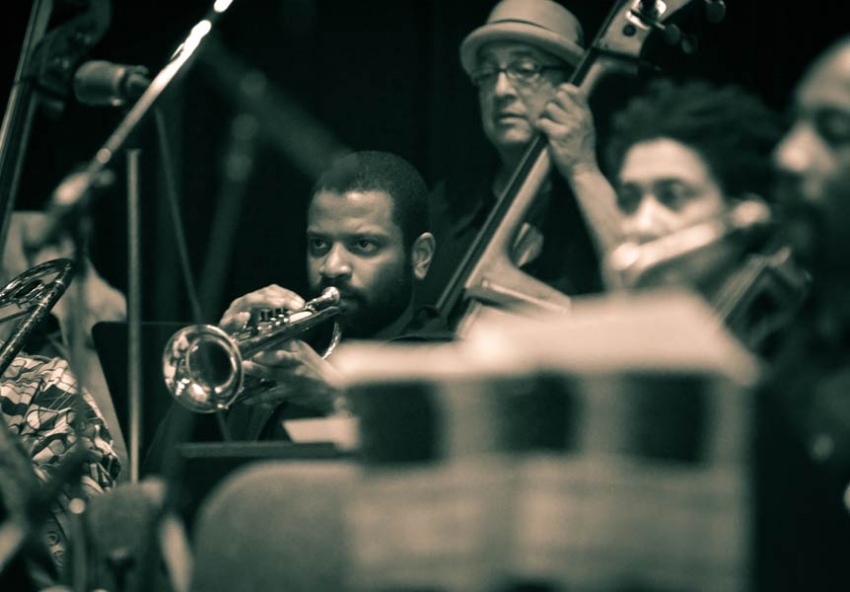 Dozens of musicians played at the AACM 50th anniversary concert on April 26 in Chicago. (Photo courtesy of Tony Smith ©2015)

The Collective That Saved Jazz

The 1960s were a period of great ferment in many musical genres, but especially in jazz, where new and musically transgressive styles were combining with the political defiance that characterized the developing Black Power movement.

This year, a truly golden anniversary is taking place in Chicago: the 50th birthday of the Association for the Advancement of Creative Musicians (AACM), an organization unlike any other in the history of jazz music—or any musical genre, for that matter.

The AACM is at once a management firm, artistic salon, aesthetic manifesto, training ground for young musicians and musical manifestation of black cultural nationalism. In short, it’s hard to pin down. But what’s clear is this: It is the most illustrious jazz collective in history.

The AACM was formed in Chicago in 1965, when jazz was losing its pop currency to rhythm and blues and rock ‘n’ roll. For jazz musicians, as AACM member George Lewis explains in his 2007 book, A Power Stronger than Itself: The AACM and American Experimental Music, everything was beginning to evaporate: club dates, dance-band jobs, instrumental recording sessions. And so musicians came together and organized, under the logic that if the clubs refused to hire them, they would create their own venues and put on their own concerts.

“[Muhal Richard Abrams, Steve McCall and I] met in my living room on 75th Street and decided to do something about our lack of employment,” explains trumpeter Kelan Phil Cohran, one of the AACM’s cofounders.

Abrams already had formed a group, the Experimental Band, for Chicago jazz musicians frustrated by the stylistic straightjackets required for commercial employment, and members of that group quickly joined the AACM.

Suddenly there was a group of experienced musicians who gathered to perform their own kind of music, untethered from the genre categories—bop, post-bop, cool jazz—that circumscribed jazz at that time. The group embraced a stylistic freedom similar to the music being produced by East Coast titans like John Coltrane and Pharaoh Sanders, but also sought to carve sonic territory unique from the New York City jazz colossus that for decades had overshadowed the Windy City. AACM members were known for a free and playful improvisation style with an emphasis on Africa.

The 1960s were a period of great ferment in many musical genres, but especially in jazz, where new and musically transgressive styles were combining with the political defiance that characterized the developing Black Power movement. Jazz was being redefined as anthemic to black identity. The AACM embodied that in its credo, “Great Black Music: Ancient to the Future.”

One of the first collectives to emerge from this ferment was the Art Ensemble of Chicago, bursting out of the gate with a discordant urgency, unconventional instruments and Afrocentric garb. The ironic juxtaposition of the group’s sedate name and its insurgent agenda embodied the AACM’s intention to upend traditional notions of artistic integrity.

The AACM’s longevity is explained in part by its connection to black struggle. When Cohran cofounded the group at age 38, he says, deep involvement in the black movement was a primary motive. “We were spiritually connected to the aspirations of black people and those aspirations are a source of continuous inspiration,” he tells In These Times. Cohran’s personal example has inspired a group called Hypnotic Brass Ensemble, a popular eight-part brass ensemble whose members all happen to be Cohran’s sons. The AACM also operates a school providing free musical education and instruments to disadvantaged children in Chicago.

The celebration of the AACM’s 50th anniversary is an all-year affair, with multimedia events and concerts, an exhibit at the Museum of Contemporary Art, and a gala concert at the University of Chicago. The enormity of celebration is a reflection of the size of the collective’s contributions to Chicago’s jazz heritage, which can’t be overstated.