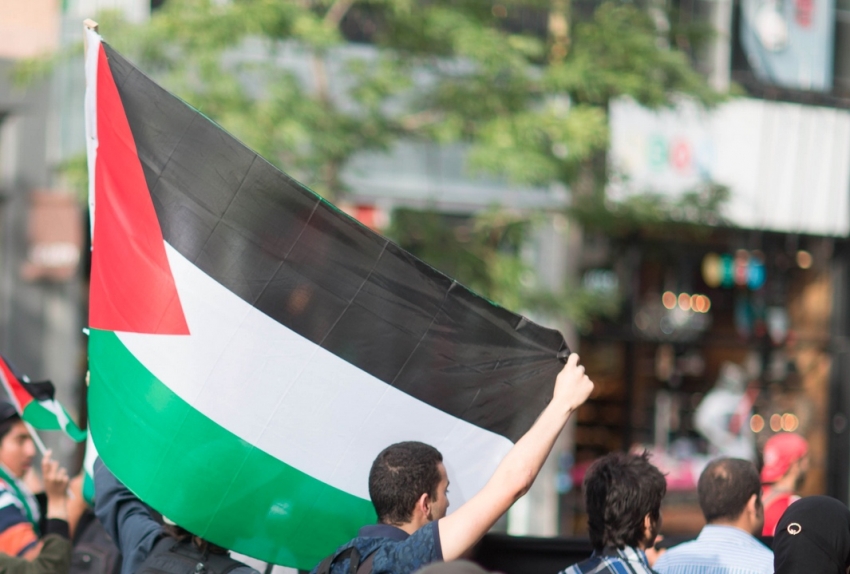 The anti-worker and anti-Palestinian agenda seem to be converging in Illinois.

These pieces of legislation serve to intimidate and deter supporters of BDS and companies that would consider making ethical business decisions by making clear that the state or the federal government disapproves of such a viewpoint or activity.

As Illinois public workers struggle to protect their underfunded pensions from seizure by Governor Rauner and austerity-minded politicians across the political spectrum, Springfield legislators have devised a way to further politicize the pension debate—this time, by using it to shield Israel from the grassroots momentum of the global Boycott, Divestment and Sanctions (BDS) movement for Palestinian human rights.

With the unanimous passage of Illinois House Bill 4011 and Senate Bill 1761, Illinois’s five state pension funds would be forced to divest from any company that publicly supports or engages in a boycott against the state of Israel. SB 1761 was proposed by State Senator Ira Silverstein, a strongly pro-Israel Chicago Democrat who last year sponsored unsuccessful legislation calling on state university presidents to publicly condemn academic boycotts of Israel. Rep. Sara Feigenholtz, another Chicago sponsor of the bill, declared “if you’re going to boycott Israel, an ally of the United States, a democracy in the Middle East, then we are going to divest from you.” Governor Rauner, who during his 2014 campaign criticized Pat Quinn’s “pattern of silence” around BDS and pledged to “always stand squarely … in strong support of the state of Israel,” has endorsed the bill.

As Springfield moves to align the anti-worker agenda of pension reform with the anti-Palestinian agenda of American foreign policy, thousands of activists on college campuses, in religious institutions and across a broad swath of international social movements continue to embrace BDS as an effective tactic to put nonviolent pressure on Israel to end its occupation of Palestine. Begun in 2005 as a declaration from 171 Palestinian non-governmental organizations, the BDS movement calls on the world community to boycott and divest from companies that profit from the violation of Palestinian rights, and apply sanctions to pressure Israel to end its occupation, grant equal rights to its Palestinian citizens and respect and promote the UN-stipulated right of refugees to return to their homes and properties.

Though Illinois will become the first state in the nation to divest from companies that support Israeli boycotts if the bill is signed by Gov. Rauner, it will join other state and federal bodies in a coordinated pushback against BDS. Last month, Indiana and Tennessee state legislators passed legislation formally opposing BDS. In California, where non-binding divestment resolutions have passed in student governments across the public university system and an academic workers union, state senators are pushing for legislation that seeks to stifle campus debate by equating criticism of Israel with anti-Semitism.

“Israel advocacy groups like AIPAC, and the Jewish Federation in the case of the Illinois bill, are pushing legislation to bolster their attacks against free speech and time-honored civil rights tactics like boycott movements,” says Dima Khalidi, Director of Palestine Solidarity Legal Support and Cooperating Counsel at the Center for Constitutional Rights. “These pieces of legislation, if passed, would not affect individuals' ability to advocate for BDS on campuses or in other spaces—that would be plainly unconstitutional. …  They do, however, serve to intimidate and deter supporters of BDS and companies that would consider making ethical business decisions by making clear that the state or the federal government disapproves of such a viewpoint or activity.”

At the federal level, U.S. Senators surprised the American public last month by quietly slipping an anti-BDS amendment into the controversial “Fast-Track” Trade Promotion Authority, a piece of legislation soon to come to a vote before the House and Senate that will streamline Congressional approval of disastrous international trade deals like the Trans-Pacific Partnership.

This amendment, along with similar House legislation introduced in March, would allow the U.S. to use international trade negotiations to pressure foreign companies not to engage in “politically motivated actions to boycott, divest from or sanction Israel.” As the U.S. negotiates with the EU over the Transatlantic Trade and Investment Partnership (T-TIP), it seeks to pressure the EU, which recently cut funding to institutions in Israeli settlements and attempted to label all settlement product imports, to reverse its gestures towards BDS.

“By helping Israel strengthen its settlement enterprise in the West Bank and East Jerusalem and maintain its siege on the Gaza Strip, these bills stand in the way of justice and equality for Palestinians and true safety and security for Israelis,” says Rabbi Joseph Berman, federal policy organizer at Jewish Voice for Peace. “They also stand against the international community and American public, both of whom overwhelmingly support an end to Israel’s occupation.”

In the month of May alone, BDS made headlines around the world when Lauryn Hill canceled a show in Israel, and the Brazilian government canceled a $2 billion contract with an Israeli security firm to coordinate security for the 2016 Olympics in Rio De Janeiro. In America, the United Methodist and Presbyterian Churches have made moves in recent years to boycott and divest, and hundreds of Students for Justice In Palestine (SJP) chapters have brought BDS resolutions before the student governments of universities across the country.

“BDS is winning because the Palestinian struggle is no longer this marginal thing people don’t talk about,” said Bassem Kawar, local organizer with the U.S. Palestinian Community Network (USPCN), a national Palestinian community organization. In the Chicagoland area, likely home to more Palestinian immigrants than anywhere in the U.S., USPCN is part of a coalition of mobilized community members to visit the state capital Springfield, talk with legislators, and file over 800 witness slips against SB 1761. “It’s no longer radical to say that Israel is a racist, apartheid state. BDS … is causing people to have conversations about the occupation, and changing the way people talk about it. That’s why AIPAC is afraid.”

Will BDS continue to gain ground worldwide? Last summer, the world watched as Israel’s Operation Protective Edge killed over 2,100 Palestinians in Gaza, over 70% of whom were confirmed civilians, and wounded over 10,000 more. Israel indiscriminately reduced businesses, medical facilities, mosques, power stations, civilian homes and high-rise apartment complexes to rubble during the 51-day onslaught.

Then, Israeli voters elected another hard-right coalition government in March 2015, led again by Prime Minister Benjamin Netanyahu and featuring people like Justice Minister Ayelet Shaked, who asserted in a Facebook post shortly before Protective Edge that “the entire Palestinian people is the enemy” and called for the destruction of “its elderly and its women, its cities and its villages, its property and its infrastructure.”

The Northwestern University chapter of Students for Justice in Palestine, which worked in coalition to pass a student senate divestment resolution in February, remains unfazed by Springfield’s moves to stifle the BDS movement.  “Now more than ever,” it said in a statement after the passage of SB1761, “we must organize, mobilize and fight for our constitutional freedoms of speech and association so that we may stand in solidarity with Palestinians. Now more than ever, we must boycott, divest and sanction.”

Ben Lorber is Campus Coordinator for Jewish Voice for Peace.