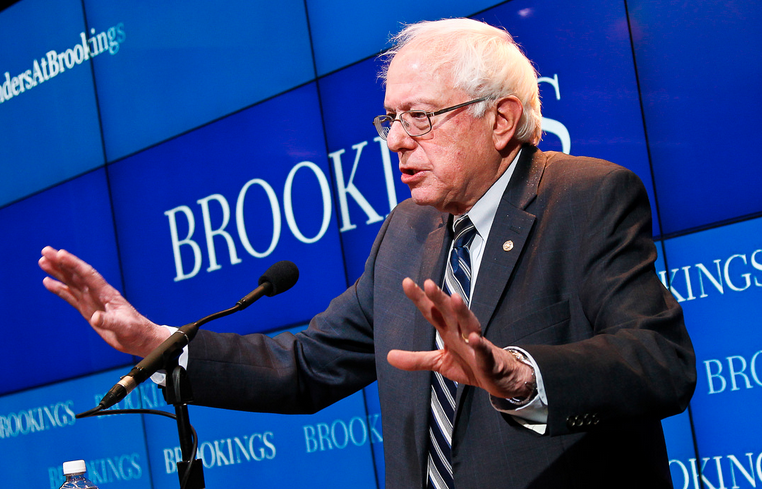 Despite what corporate Democrats and the Bernie-bashing mainstream media might tell you, Main Street America favors left-leaning policies.

If Senator Sanders is a crackpot, so are the majority of Americans. The ideas and policies he espouses have far more public support than the journalist habitués of Capitol Hill and Pennsylvania Avenue would have you believe.

Congressman John K. Delaney, what the hell are you talking about?

In a recent Washington Post op-ed piece, headlined, “The last thing America needs? A left-wing version of the Tea Party,” the Democratic congressman from Maryland scolds progressives and expresses his worry “about where some of the loudest voices in the room could take the Democratic Party.”

He writes, “Rejecting a trade agreement with Asia, expanding entitlement programs that crowd out other priorities and a desire to relitigate the financial crisis are becoming dominant positions among Democrats. Although these subjects may make for good partisan talking points, they do not provide the building blocks for a positive and bold agenda to create jobs and improve the lives of Americans.”

Rep. Delaney even implies that a freewheeling, open discussion of “these subjects” could lead to the election of a Republican president.

Good grief, John. A trade agreement that favors multinational corporations over working people? Cutting “entitlement programs” such as Social Security, Medicare, Medicaid, worker’s compensation? Letting Wall Street off the hook for crashing the economy and costing millions of Americans their jobs and homes?  These are Republican policies, bought and paid for by plutocrats. If Democrats simply mimic them, there would be no need to bother with voting for a Republican president; we could cancel the election and put the billions saved in campaign contributions straight into the Clinton Foundation.

The progressive agenda isn’t “left wing.” (Can anyone using the term even define what “left wing” means anymore?) The progressive agenda is America’s story — from ending slavery to ending segregation to establishing a woman’s right to vote to Social Security, the right to organize, and the fight for fair pay and against income inequality. Strip those from our history and you might as well contract America out to the US Chamber of Commerce the National Association of Manufacturers, and Karl Rove, Inc.

At their core, the New Deal, Fair Deal, and Great Society programs were aimed at assuring every child of a decent education, every worker a decent wage, and every senior a decent retirement; if that’s extreme, so are the Declaration of Independence and the Preamble to the Constitution.

But such is the level of what passes for discourse inside the Beltway these days. The cushioned political and media elites who eat, drink, and make merry with each other at the annual White House Correspondents & Celebrity Ball are so cozy up there in the stratosphere that they dismiss as the lunatic fringe any voice from below that challenges the status quo.

And by the way, John, the “loudest voices in the room” aren’t populists or progressives; they belong to the auctioneers selling our government to the highest bidders.

Can you believe this? Rep. Delaney even thinks that progressives are too engaged “in time-consuming rhetoric attacking banks that has little chance of producing more financial reform and distracts from far more consequential areas of economic risk…” Yet his words come on the heels of another round of billions in fines against the big banks for perpetrating fraud, an ongoing attempt by Republican Senator Richard Shelby and his Wall Street-funded colleagues on the Senate Banking Committee to eviscerate the reforms of Dodd-Frank, and an updated report from the University of Notre Dame and law firm Labaton Sucharow that says, “Nearly seven years after the global financial crisis rocked investors’ confidence in the markets and financial services in general, our survey clearly shows that a culture of integrity has failed to take hold. Numerous individuals continue to believe that engaging in illegal or unethical activity is part and parcel of succeeding in this highly competitive field.” (And why not, when the chances of going to prison for your blatant misdeeds are virtually nil?)

But Rep. Delaney seems to think any objection to these behaviors and other misdeeds just jams the works and keeps the grownups from taking care of business. So does former Mitt (“47 percent”) Romney advisor and George W. Bush (slash taxes on the One Percent!) speechwriter Peter Wehner, who recently warned in The New York Times that many Democrats “are placing a very risky bet that there are virtually no limits to how far left they can go.”

How about far enough left to reach Main Street?

Just take a look at the initial press reaction to Vermont Senator Bernie Sanders’ presidential candidacy. As Steve Hendricks observed in the Columbia Journalism Review, “For not going with the flow, and for challenging Hillary Clinton, the big fish many elites have tagged as their own, Sanders’s entry into the race was greeted with story after story whose message — stated or understated, depending on the decorum of the messenger — was ‘This crank can’t win.’”

Hillary Clinton’s “corporatism,” Hendricks writes, “wed to her social liberalism and her imperial hawkishness appeals to those in the moneyed Second and journalistic Fourth Estates who would embrace Republicanism but for its misogynistic, homophobic, racist, science-denying core.” And so Sanders was tarred at the outset as a doomed crackpot candidate,  followed then by article after article that fixated not on ideas and policies but on various idiosyncrasies, Sanders’ age and hippie past, the ideology of democratic socialism, and for heaven’s sake, his flyaway hair.

But if Senator Sanders is a crackpot, so are the majority of Americans. The ideas and policies he espouses have far more public support than the journalist habitués of Capitol Hill and Pennsylvania Avenue would have you believe.

Juan Cole of the blog Informed Comment pulled together some of the figures:

Some 63 percent of Americans agree that the current distribution of wealth is unfair. And in a Gallup poll done earlier this month, a majority, 52 percent, think that government taxation on the rich should be used to reduce the wealth gap… A majority of Americans oppose the Supreme Court Citizens United ruling, one of a number of such rulings that have increased the ability of the super-wealthy to influence politics. A good half of Americans support federally financed political campaigns so as to level the playing field… Some79 percent of Americans believe that education beyond high school is not affordable for everyone. And some 57 percent of people under 30 believe student debt is a problem for youth… According to a very recent Yale/Gallup poll, some 71 percent of Americans believe global warming is occurring, and 57 percent are sure that human activity (emitting greenhouse gases like carbon dioxide) is causing it…

There you have it: Far from being an outsider, Sanders is paddling his way along the mainstream of American public opinion. Look at the crowds that are gathering to hear him speak: More than 3,000 in Minneapolis, Minnesota on Sunday, standing room only in Ames, Davenport and Iowa City, Iowa. Reporters can’t help but take notice now. “At campaign stops in early states and elsewhere, the firebrand from Vermont is drawing enthusiastic crowds that are several times larger than those that gather for [fellow presidential aspirant Martin] O’Malley,” notes The Washington Post. And The New York Times: “The crowds at Mr. Sanders’s Iowa events appeared to be different from the state’s famously finicky tire-kickers. Many said they had already made up their mind to support Mr. Sanders. They applauded his calls for higher taxes on the rich to pay for 13 million public works jobs, for decisive action on climate change and for free tuition at public colleges.”

Oh, how the mighty tremble when they hear such things!  The murmuring crowd is their worst nightmare. So plutocratic Republican apologists like Peter Wehner, the corporate Democrats of Clinton, Inc., and killjoys like Congressman Delaney will double down against Bernie Sanders,  just as they have against all those in politics before them who champion bottom-up democracy. If that means turning “left,” so be it. For Democrats, it’s the way home. They would do well to remember that apocryphal saying, usually attributed to Gandhi: “First they ignore you, then they laugh at you, then they fight you, then you win.”

This story first appeared at BillMoyers.com.