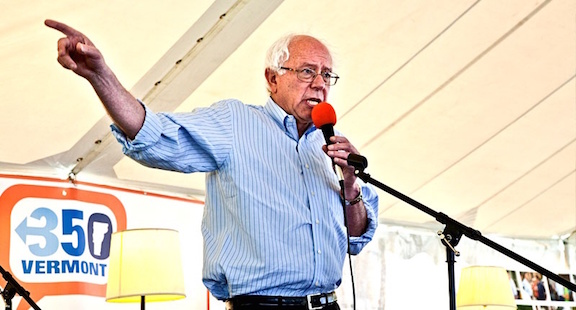 Good News for Bernie Sanders? Poll Shows 47% of Americans Would Vote for a Socialist

A sizeable chunk of Americans say they’d consider voting to send a socialist to the Oval Office.

A new Gallup poll shows that 47 percent of Americans would consider voting for a socialist candidate. Gallup has been polling Americans on their voting preferences for candidates of different backgrounds since 1937, but this year was the first time they inquired about socialism.

When broken down on party lines, a socialist candidate would earn the consideration of 59 percent of Democrats, 49 percent of Independents, and only 26 percent of Republicans. Overall, socialism charted the lowest of all the backgrounds referenced in the poll. Atheist and Muslim candidates ranked second- and third-lowest among the American populace, at 58 and 60 percent respectively.

This poll comes less than two months after Bernie Sanders announced his candidacy, becoming the first self-described socialist (with at least a decent chance of winning) to do so in more than a decade.

Advocates for Sanders argue that the Gallup poll is misleading for a number of reasons. While Americans may disapprove of a socialist candidate, they strongly support policies that Sanders stands for. Fifty-two percent support a redistribution of wealth through heavily taxing the rich, for example—the highest number that Gallup has seen since first asking that question in 1940. And 63 percent of Americans believe that the current distribution of wealth in the US is unfair.

Part of the reason for this dissonance is confusion among the America population as to what the word “socialism” even means. Many often associate it with the authoritarian Communism of the Soviet Union instead of the social democracies of modern-day Scandinavian countries, which Sanders strongly backs.

Even though the number of voters who say they would consider voting for a socialist candidate is below an outright majority, the fact that the number of Americans who would consider voting for a socialist is at 47 percent, in a country with a long history of vicious red-baiting, seems to suggest that Americans aren’t as afraid of the word “socialist” as many on the Right would like them to be.

Meanwhile, Sanders seems to be getting through to the American people. He consistently draws the largest crowds of any candidate to his events in Iowa, and 32 percent of New Hampshire Democrats and 41 percent of Wisconsin Democrats are backing him. Sanders has more than seven months to build a solid voting bloc, before the first primaries on February 1, 2016.