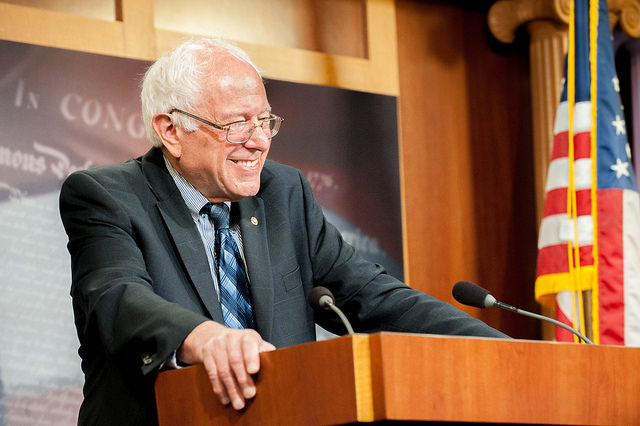 Bernie’s socialism isn’t a “charade.” It’s a provocation—and a brilliant one, at that.

Bernie is hardly calling for the dictatorship of the proletariat. But in our current context, his politics come off as downright radical. And it just might be a form of “socialism” that much of the country—more than 47 percent—is ready to embrace once again.

Bernie Sanders’s star is rising. The New York Times published a story last week about his “revolutionary roots” in Vermont, not long after he drew a crowd of nearly 10,000 people to a rally in Madison, Wisconsin. The “Sanders surge,” as it’s been dubbed, is “becoming a bigger problem for Hillary Clinton,” according to The Hill. “Hillary’s Camp Worries Over Sanders’ Surge in Polls,” as a Newsmax headline put it.

One person not worrying about the Sanders surge, though, is Sen. Claire McCaskill (D-MO), a Clinton ally who “unloaded” on Sanders recently, according to Politico, claiming that he’s way too far outside the mainstream to be electable. “I very rarely read in any coverage of Bernie that he’s a socialist,” she said.

Sen. McCaskill rarely reads any coverage of Bernie Sanders, apparently, since the Vermont senator’s self-identification as a socialist regularly comes up in coverage of his campaign. And far from being a liability, as Sen. McCaskill suggests, it’s actually a stroke of political genius.

It’s fair to doubt whether Sanders actually qualifies as a socialist, as writers across the political spectrum have done. And it’s fair game to affirm that he’s a socialist and call his philosophy “foolish,” as a libertarian publication has done. But doubting that the media actually discusses his socialism? It’s one of the primary reasons that pundits and journalists write about him. A self-described socialist with “revolutionary roots” mounting a bid for the presidency and drawing big crowds—that’s a story.

But whether they praise or condemn him, pundits seem sure how this story will end. He’ll make some waves in the primaries, they argue, but no socialist will be elected president.

Well, maybe. A recent poll showing that 47 percent of the population would vote for a socialist was widely portrayed as potentially good news for Sanders—even though, at 47 percent, socialist ranked last of the 11 options. Atheists were the next lowest category, with 58 percent of respondents saying they would vote for one. The bar is apparently so low for socialists that it’s good news when nearly half of the population would even think about voting for you.

There is some reason for hope in the fact that, as with Obamacare, people have fuzzy notions about what “socialist” means—and support many of the particulars, even if they reject the label. Sanders’s record, especially his time as mayor of Burlington in the 1980s, essentially comes down to higher taxes on the wealthy and strong investment in programs and projects that have broad public support—things like building parks and schools and providing free or low-cost child care.

He certainly is not a socialist in the old-school sense. The conservative columnist George Will believes he isn’t one at all. Will harrumphed recently that Sanders’s self-proclaimed socialism is a “charade” that wilts under scrutiny. “In olden days,” he wrote, “socialism meant something robust—government ownership of the means of production, distribution and exchange. Then … the idea was diluted to mean just government ownership of an economy’s ‘commanding heights.’” For Will, Sanders’s claim on the label represents the total corruption of the word.

It’s true that, judged strictly by his voting record, Sanders is far from a radical. In fact, he isn’t even close to being the most progressive member of the Senate, according to Progressive Punch, which ranks members of Congress by the progressive quality of their voting record. Sanders’s overall lifetime score in the Senate puts him at 19—right in the middle of the Democrats. (Elizabeth Warren ranks fourth. The other senator from Massachusetts, Ed Markey, ranks first.) Sanders is just behind Jack Reed (RI) and Bob Menendez (NJ). He’s just ahead of Martin Heinrich (NM) and Dick Durbin (IL). He has been particularly—and weirdly—anti-progressive on gun control, once voting in favor of allowing handguns in baggage on Amtrak trains.

Yet it’s clear that something sets Sanders apart from Menendez, Durbin and the other Democrats with similar voting records. Perhaps it’s that, by formally keeping his distance from liberalism, Sanders forces fundamental political and moral questions onto the table.

His socialism isn’t a “charade.” It’s a provocation, simultaneously jarring and oddly familiar. And it’s politically brilliant—which is perhaps why it irks conservatives like George Will.

Five decades ago, Sanders’s agenda was called New Deal liberalism. But three decades of policies that cut taxes for the wealthy while privatizing and shrinking the public realm have rendered the old labels and frameworks nearly irrelevant.

As the “Sanders surge” gains momentum, his identity as a socialist will be condemned, celebrated and contested. But it won’t be ignored. The word provokes the media to take note. And when they do, they might discover  that Sanders’s preoccupation with equality has deep roots in our past. Our politics, at its finest, has long nurtured the faith that near-term investments in public works pay long-term dividends, that the point of government is to pursue the common good and that inequality is toxic to our democracy.

That faith doesn’t amount to radicalism or socialism in the classic sense, it’s true—Bernie is hardly calling for the dictatorship of the proletariat. But in our current context, his politics come off as downright radical. And it just might be a form of “socialism” that much of the country—more than 47 percent—is ready to embrace once again.