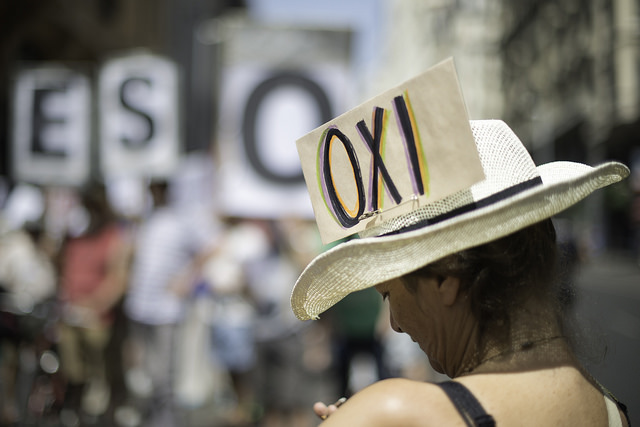 The Greek Crisis Shows the Fundamentally Undemocratic Nature of the Eurozone

To the Troika, the election of Syriza, the referendum vote and the basic principles of democracy are meaningless.

There is not a single democratic maneuver that the Greek people can make to appease the Troika—only full capitulation to the demands for more austerity.

As of Tuesday evening Greek time, eurozone leaders have forced an ultimatum on Greece’s government: capitulate within five days or leave. Warning that Syriza’s refusal to meet the terms of austerity imposed on them, European Commision President Donald Tusk and European Council President have made it clear that a “Grexit,” a Greek exit from the eurozone, is in the cards—a situation that Tusk says would be “most painful for the Greek people.”

This past Sunday, the Greek people were faced with a referendum on the very issue of austerity, posing a simple yes or no question: accept the bailout and austerity or reject it. A “yes” would mean continued “support,” in the form of fiscal abuse from the Troika (the International Monetary Fund, the European Commission and the European Central Bank), whereas a “no” would rebuff the seemingly all-powerful creditors, placing their government on a collision course with an ever-more-hostile troupe of finance officials. As the referendum results began to trickle in, it soon became clear: the Greeks, in a tremendous majority, voted “oxi”—“no,” against austerity.

It’s a frenzied time. Economics professor-turned-Greek finance minister Yanis Varoufakis resigned from his post, ostensibly due to pressure from Troika officials. The Greek banks are crumbling and on the brink of collapse. As of Monday evening, the European Central Bank is applying fiscal pressure to Greek banks as they quickly run out of money.

There are a number of paths Syriza can take—I’ve written on some of them, as have countless others. None of those paths will be painless. But after the referendum vote, it has become clear that there is much more than an economic crisis in Greece. This is the latest occurrence of a crisis between the forces of capitalism and the ideals of democracy. By calling for a plebiscite on the issue and by garnering the support of the majority of Greeks, Syriza answered the Troika with a question of its own: neoliberalism and austerity, or democracy and human dignity—which will it be?

It should be noted that Varoufakis understood the destructive capability of the euro for the Greek economy years before he was appointed finance minister. Writing for his blog, he argued that joining the currency union was a “cardinal sin” that led to tremendous capital inflows and an enormous debt bubble which formed the veneer of a growing economy, only to lead Greece into a permanent depression. The self-described “erratic Marxist” argued that ultimately the currency would prove itself toxic to the entire eurozone. If we can glean anything from Varoufakis’ writings, it’s that this crisis is not only a Greek crisis but rather a global one, with Greece serving as the tip of the European iceberg.

In responding to the Greek crisis with bank bailouts and debilitating austerity, the European neoliberal technocracy perpetuated the economic meltdown without bettering political, economic or social conditions. As the country teeters on the edge of Europe, spiraling toward failed-state status, the sacred order of neoliberalism represented by the Troika keeps prescribing the same ineffective regiments of bank-friendly bailouts and austerity. We’ve seen time and again that these practices lead to deepening unemployment, homelessness and escalating suicide rates.

Over the last five months, the Greek people have consistently made their opposition to austerity clear: first, with the election of Syriza in January, which ran on a firmly anti-austerity platform; second, with last weekend’s referendum vote. In spite of these democratic overtures and positive language about hopes for a deal from Greece’s new finance minister Euclid Tsakalotos, the Troika and other eurozone finance officials have expressed that there can be no further debt restructuring and that the austerity reform measures are an essential component of any deal.

To the Troika, the election of Syriza, the referendum vote, as well as the very principles of democracy, are basically meaningless. There is not a single democratic maneuver that the Greek people can make to appease them—only full capitulation to the demands for more austerity.

In light of the referendum vote, the fact that the Troika is a completely undemocratic entity, carrying out the dictates of the continent’s one percent without having to answer to anyone else, has become even more clear. The IMF, EC and ECB, the very architects of the bailouts and the institutions setting the terms of austerity, are unelected by the people and ungoverned by the Lisbon Treaty (the glue of the European Union and eurozone). They’ve presided over the continued upward redistribution of wealth—from the people to the coffers of the banks.

This widening of inequality by purposefully redistributive means is not isolated to Greece. In 2008, with income inequality in the U.S. continuing to broaden, American taxpayers were undemocratically forced to prop up Wall Street to the tune of 700 billion dollars, making a private debt a public one. And even Germany, Greece’s moralistic task master on debt, has seen policy shifts that have increased wealth inequality.

That inequality continues to increase in seemingly democratic nations is indicative of a serious flaw in the current economic model. When neoliberal elites see that democracy constrains their ability to upwardly redistribute wealth, as the Greek people’s current demands do, elites can simply ignore them. As is the case in Greece, once the command of the entire economy is in the grip of unelected financial institutions, democracy is reduced to a mirage.

In other words, the conditions created and the strictures imposed by neoliberalism in Europe do not allow for democratic governance. No matter what the public wants, it is the aims of international finance that must be met, even if it means the suffering of millions.

The European Union was conceptualized, in part, as a means to promote economic and democratic cooperation. In calling a referendum and mobilizing the people, Syriza has revealed this to be a farce, exposing just how undemocratic the EU’s economic reliance on the Troika and neoliberal agenda is. By casting their ballots, the people of Greece may be the first in a long line of people the world over who will have to ask the question “the people or the banks, democracy or austerity—which will it be?” Sometime within the next few days, it appears we will have an answer.