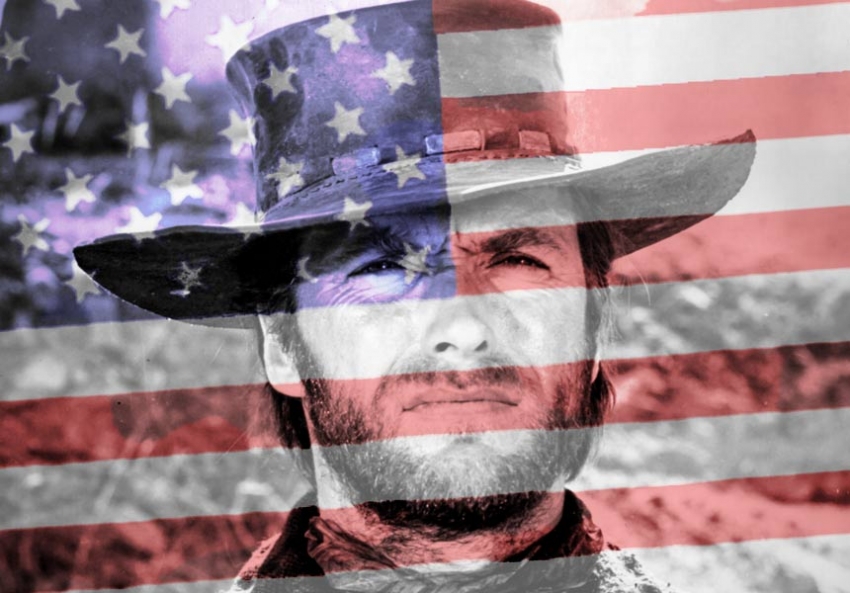 Clint Eastwood: The Good, the Bad and the Reactionary

Patrick McGilligan’s unauthorized biography of the film legend, updated through 2015, suffers from bastard fatigue: There are just too many examples of Eastwood’s perfidy.

We find that Eastwood is a conceited bastard; a compulsive horndog with a preference for teenage girls; a vindictive sumbitch who routinely betrayed friends, colleagues, wives and lovers.

Patrick McGilligan’s unauthorized 2002 Clint Eastwood biography, Clint: The Life and Legend, has been rereleased with new material up through 2015, emphasizing the way Eastwood cemented his status as a “red-state star.” Included is Eastwood’s much-mocked appearance at the 2012 Republican National Convention, where he gave a speech directed at President Barack Obama but delivered to an empty chair, and the 2015 Academy Awards, where the Eastwood-directed film American Sniper—regarded in left-wing circles as simple-minded American jingoism at its worst—received six nominations.

McGilligan’s bio is loaded with dirt about Eastwood. It’s especially good dirt because, as McGilligan reveals, the star has worked so hard since the 1950s to craft and micromanage his image as, ironically, an authentic, tough, working-class, taciturn guy who’s reluctant to give interviews. McGilligan marvels that, after the release of Unforgiven in 1992, people still believed that Eastwood, a master of self-promotion, was making a rare effort in talking up the film.

Clint was first published in Great Britain in 1999, but the U.S. release was delayed for years while the notoriously litigious Eastwood sued McGilligan for $10 million. The lawsuit was eventually settled without penalty, although McGilligan agreed to rework certain minor aspects before the U.S. publication in 2002. Eastwood’s vain attempt to suppress the biography is proudly hyped by the current publisher, OR Books, and by McGilligan, who calls the lawsuit “a badge of pride.”

In other words, this is a hit piece, and what’s more enticing, a well-researched one. In it we find that Eastwood is a conceited bastard; a compulsive horndog with a preference for teenage girls; a vindictive sumbitch who routinely betrayed friends and colleagues, wives and lovers. McGilligan’s Eastwood is a cold narcissist, a case of arrested development. Though capable of great charm in pursuit of an advantageous business deal or sexual conquest, he is a strangely limited man, full of business savvy but weirdly obtuse.

McGilligan’s Eastwood, made an international star in Sergio Leone films—A Fistful of Dollars, For a Few Dollars More, and The Good, the Bad, and the Ugly—thought the impassioned Italian genius was way too fussy about cinematic effects. Eastwood couldn’t see the point in all the waiting around in order to get one more fantastic shot. Leone reported later that it was Eastwood’s indolence and indifference that made him so right for the role of the Man with No Name: The success of the films was built on the combination of Eastwood’s “slow, laidback and lazy” attitude with “the blast and velocity of the gunshots.”

Initially, Eastwood so lagged in understanding the role or its impact that, after he was made an offer for the second film, the health-conscious actor tried to get an agreement that he wouldn’t have to put those nasty cigarillos in his mouth anymore. Yet “Il Cigarillo” was his admiring nickname given to Eastwood in Italy, where he was already a huge star.

Trying to josh him back into reality, Leone said, “Clint, we can’t leave the main protagonist at home! The cigar is playing the lead!”

Later, when Eastwood became a director, he rejected Leone’s fussy tendencies, often adapting first drafts of prosaic scripts and filming each shot in one or two takes with an absolute minimum of effort. Eastwood frequently insisted on rushing through the ends of film shoots, sacrificing continuity and driving his editors into fits, because the star, easily bored, was sick of the whole process after six weeks and wanted to go off skiing or something.

Eastwood comes off as a blandly awful, all-too-recognizable Hollywood type. I've also been reading a recent Bob Hope biography, Richard Zoglin's Hope: Entertainer of the Century, and there are striking similarities: the relentless pursuit of ever-greater stardom from early youth to old age, the near-sociopathic self-centeredness, the compulsive womanizing while the loyal wife looks the other way, the golfing, the business savvy that led to extreme wealth, the reprehensible cheapskate tendencies, the preference for living in resort enclaves, the hobnobbing with Republican presidents, the political conservatism half-obscured for many years to avoid alienating fans, and the winning grin that hides a perfect willingness to walk over anyone who gets in the way.

But there's one key difference: Bob Hope blasted out of genuinely terrible poverty, first in the south of London and then as a struggling immigrant in Cleveland, Ohio. Eastwood was raised in comfortable circumstances. As McGilligan takes pains to demonstrate, this fact has been consistently obscured by Eastwood, who has always preferred to talk about his family's struggles in Depression-era Oakland, California, when the prosperous Eastwoods came closest to dropping out of the middle class. Eastwood carefully adheres to the image the Hollywood PR flaks sold to the public when he was a young up-and-comer in the 1950s and 1960s: the rough-hewn, casual, working-class guy overcoming a gritty past. That image has been seamlessly woven into a series of iconic Eastwood roles as badly paid urban cops and hardscrabble Western anti-heroes in dusty jeans and beat-up boots.

As fascinating as all this scuttlebutt is, there’s a lurking drawback to reading this biography: bastard fatigue. After a while, you just don’t want to read another example of Eastwood’s perfidy.

A larger problem with the book is McGilligan’s lack of feeling for the films that made the public love Eastwood in the first place. McGilligan doesn’t “get” Eastwood movies, to say the least. He casually dismisses as “over praised” the brutal, demythologizing Unforgiven, with its bleakly hilarious view of rampant male incompetence on the frontier, a perfect capstone to Eastwood’s vital contribution to the post-classical Hollywood Western, while identifying the well-made but atypical Letters From Iwo Jima as Eastwood’s true masterpiece, saying it represents a filmmaker finally “edging towards depth” at the end of his career.

From the beginning, McGilligan’s cluelessness about Eastwood’s filmography is manifest. He primly deplores the violence in Sergio Leone films, for example, complaining that “For a Few Dollars More has its crude, objectionable elements: an 18-month-old baby and mother are gunned down in the bloody first reel,” which is like deploring the slapstick comedy in a Buster Keaton movie.

It’s a poignant misery, if you like action films, to be stuck reading about them in McGilligan’s priggish terms. It makes you wonder why he’d want to write a book about Eastwood in the first place. But McGilligan deals with that issue in the afterword to his book. Urged by his publisher to take on Eastwood after Unforgiven received rhapsodic reviews and many awards, including Academy Awards for Best Picture and Best Director, McGilligan delved into research and interviews and made the shocking discovery that Eastwood is almost as resented and feared personally as he is beloved publicly. It seems that in McGilligan’s view, the “objectionable elements” of Eastwood’s films reveal the “real” Eastwood in all his angry, entitled white male machismo, misogyny and red-state reactionary tendencies.

As McGilligan put it in a recent Salon interview:

People don’t think through what he stands for and what his movies are about. My book might help them do that. They respond to him emotionally and like his persona, again, without thinking it through in many instances where it might stand for something they don’t like politically.

Putting it that way makes it sound like he regards his book as a public service.

But for most of Eastwood fans, finding out that the man’s a reprehensible prick in his personal life isn’t going to make the least difference in our relationship to his films. We’ll go along with the “distinguished French film critic” McGilligan quotes but doesn’t name: “In the end, you are left with his films. If you love the films, nothing else matters.”