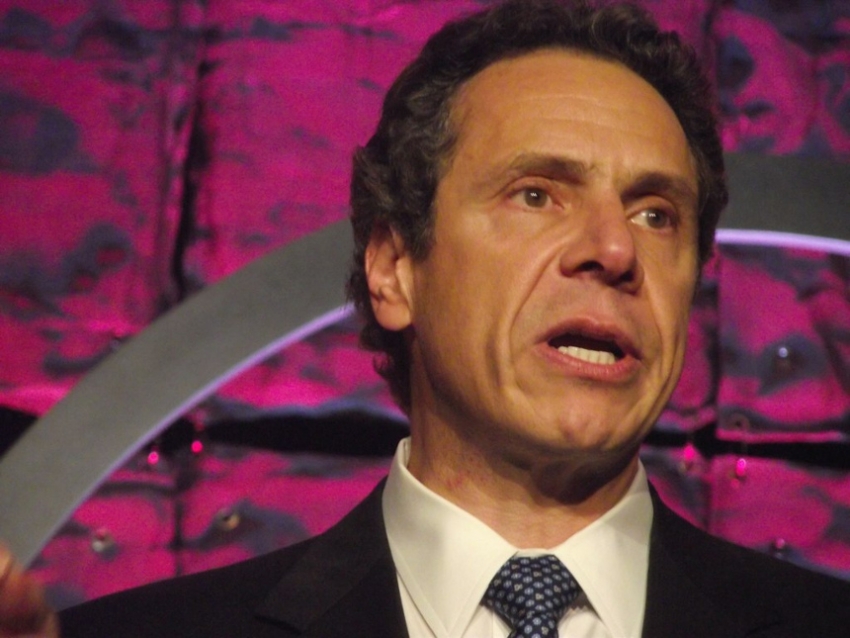 Should General Electric Clean Up its Pollution in New York? Gov. Andrew Cuomo Isn’t Sure.

The New York governor is being pressured to make General Electric finish its cleanup of the Hudson River.

While Cuomo declines to offer a clear position on GE’s cleanup efforts, he has been outspoken in his support for the company, which has donated more than $400,000 to political groups backing the governor.

Environmental groups and Democratic legislators are pressuring New York Gov. Andrew Cuomo to say that General Electric must continue cleaning up the massive pollution the company dumped into the Hudson River from 1947 to 1977. Cuomo’s own environmental officials say the pollution continues to cause “ongoing contamination,” and federal officials warn that GE’s plan to end its cleanup this fall could harm the effort to restore the river’s ecosystem.

But the Democratic governor—who has benefited from GE’s campaign cash—is declining to say whether he agrees.

In comments to reporters in Albany earlier this month, the governor said he thinks the company should “follow the law and the agreements that have been made.” Under the 2002 agreement in question, GE is planning to shut down its cleanup operations at the end of 2015—which, environmental groups claim, will leave behind at least 35 percent of the carcinogenic polychlorinated biphenyls (PCBs) the company dumped into the river during the mid-20th century.

“I know there are claims for [GE] to do more above and beyond that,” Cuomo said of the request by legislators and environmental groups. But, he added, “I haven’t really looked into that.”

Conservation groups said that unless Cuomo takes action, the cleanup of one of the nation's biggest environmental disasters will end prematurely, leaving carcinogenic PCBs in New York's largest waterway.

“Governor Cuomo has a crucial role to play, given New York's role as a trustee of the Hudson River natural resource, contaminated for decades by GE's toxic chemicals,” said Ned Sullivan, who runs the environmental group Scenic Hudson. Sullivan served as an environmental official in the administration of Mario Cuomo, Andrew Cuomo’s father. “This is a legacy issue for Governor Cuomo. He will either use his authority and persuasive powers to push GE to perform a comprehensive cleanup, or he will leave the Hudson and upstate economy damaged for future generations.”

Democratic state Sen. Brad Hoylman—who wrote legislators' letter to Cuomo asking him to support an ongoing cleanup—said the governor's comments will not deter the campaign to force GE to continue the dredging.

“This doesn't change the fact that GE has only completed 65 percent of its cleanup of the Hudson,” Hoylman told International Business Times. “I'll continue to work with my colleagues, environmental groups and local communities to make sure GE finishes its cleanup of one of our state's most treasured natural resources.”

GE has called its operations “one of the largest and most successful environmental cleanup projects ever undertaken in the United States.” But Margaret Byrne, an official at the U.S. Fish and Wildlife Service who is the agency's assessment and restoration manager for the Hudson River, raised questions about GE’s plan to shut down its dredging operations.

Her agency recently released a report showing that groundwater in some upstate towns remains contaminated by GE’s chemicals. Without GE's dewatering facility, she told IBTimes, “the additional removal of contaminated sediments would be less feasible.”

While Cuomo declines to offer a clear position on GE’s cleanup efforts, he has been outspoken in his support for the company, which has donated more than $400,000 to political groups backing the governor. In recent weeks, Cuomo has offered GE $50 million in taxpayer subsidies for a planned packaging facility in upstate New York. Those subsidies were not contingent on GE removing all PCBs from the Hudson River, which inspired criticism from some Democratic lawmakers in New York state.

“Before NY taxpayers fork over $50 million, GE needs to completely finish cleaning up their mess in the Hudson,” said Sen. Liz Krueger in a tweet.

Will Cuomo listen to the criticism? Or will he stand by as a corporate behemoth refuses to remove all of its pollution from the Hudson? The governor’s answer will help determine the future of one of America’s most important waterways.