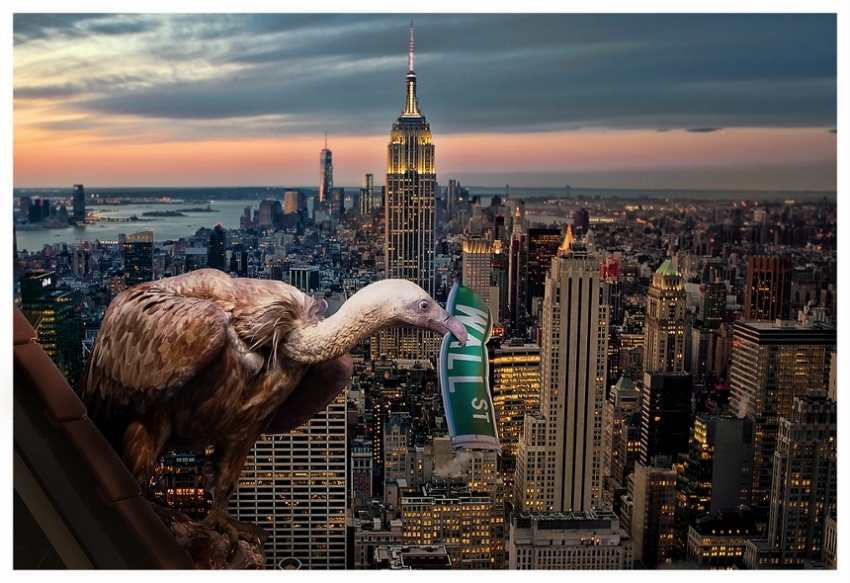 Banks have a history of failing the poor. (Tim Kwee / Flickr)

When the Bank Robs You

Mehrsa Baradaran’s How the Other Half Banks tells the history of banks robbing from the poor and giving to the rich–and explains how we can stop it.

The halting attempts to bring the poor into the fold of financial services read like a farce, with every promising effort subsumed by the profit motive.

After the death of Michael Brown, Missouri Gov. Jay Nixon convened the Ferguson Commission to identify the root causes that led to the social dislocation of racially segregated cities around St. Louis. The report not only singled out familiar problems like citizenpolice relations, municipal governance and lack of public services. It also included banking.

“Historically, there are fewer banking facilities in distressed communities,” the authors write. And without a bank or credit union account, simple functions like converting government benefits into cash, or converting that cash back into a check to pay bills, or securing a small loan in emergencies, become exorbitantly expensive. Available statistics suggest that the average unbanked family spends more on financial transactions than they do on food.

This exploitation increases poverty and despair in poor communities. People are denied the building block of economic opportunity: the use of credit to acquire wealth. Living in an all-cash neighborhood increases vulnerability to crime and alienates neighbors. And such tension can lead to tragedy.

Communities like Ferguson are all too common in America. In How the Other Half Banks: Exclusion, Exploitation, and the Threat to Democracy, Mehrsa Baradaran of the University of Georgia School of Law argues that by denying financial services to the poor, banks have broken the social contract that justifies their public charter.

Modern banking wouldn’t exist without the state. Customers freely deposit trillions in banks because of government-backed insurance, and the quasi-public Federal Reserve lends directly to banks at slim interest rates. In 2008, the federal government topped this off with hundreds of billions of dollars in emergency loans. If we bail out banks to protect the public, why don’t we demand that they serve everyone in society?

During deregulation in the 1980s, banks won the argument that they should be treated like any other industry, without a public responsibility. Baradaran unearths a 1987 FDIC document that dismisses the negative consequences of mega-banks: “It is not clear that large organizations or highly concentrated industries are able to wield too much influence over government.”

After deregulation, poor areas were abandoned, as the poor don’t make profitable customers. Between 2008 and 2013, banks shuttered nearly 2,000 branches. Ninety-three percent were in postal codes with incomes below the national median.

But, as Baradaran impressively recounts, the poor have always had difficulty obtaining finance. She quotes a 19th-century Chicago banker who explains that his firm levels “a prohibitory charge upon all accounts which average less than $300 for the express purpose of driving them away.” And the tragic history of redlining, denying housing loans to African-Americans and shunting them into segregated communities, created cities like Ferguson.

The halting attempts to bring the poor into the fold of financial services read like a farce, with every promising effort subsumed by the profit motive. Credit unions, founded in America in the early 20th century on the idea that people within a certain occupation could pool their money and lend to members in need, are today more likely to serve upper- and middle-income customers. Community banks were overwhelmed by mega-bank consolidation after the 1994 lifting of restrictions against opening bank branches across state lines. Community development financial institutions invest in poor communities, but primarily through large-scale projects, not direct lending

Many of Baradaran’s case studies are part of our shameful history of structural racism. Freedman’s Savings Bank, created by President Lincoln after the Civil War for former slaves, was deregulated within five years, and depositor funds were used for risky real estate speculation. In June 1874, the bank closed and depositors lost $3 million (about $60 million today). In 1910, Virginia lawyer Arthur Morris created the first industrial loan company (ILC), delivering installment loans to indigent borrowers. But by the 1940s, local operators of ILCs began to compete for higher-wealth customers, losing their mission-based focus. Serving the public good always crashes the moment financiers decide they would rather make a profit.

While non-predatory banking options for the poor fail, mandates on large banks to extend credit to low-income earners typically produce only bitter bankers and bad products. The Community Reinvestment Act (CRA) of 1977 has been vilified by bank lobbyists and conservatives alike, and even accused of driving the financial crisis. It’s not clear that lending to the poor has increased meaningfully, but the CRA’s requirements are so lax that 97 percent of banks tested for compliance have passed. In 2008, the FDIC recruited 31 volunteer banks into its Small-Dollar Loan Pilot Program. But the products offered were no better than what people could get from the check-cashing store. After two years, Congress pulled the plug.

Technological innovations like reloadable prepaid cards, peer-to-peer lending and mobile banking could help relieve the crisis. Walmart has become a national leader in banking to the poor with its Bluebird prepaid card, cheap check-cashing and even an FDIC-insured checking account, in partnership with Green Dot Bank. But Baradaran wonders whether the retailer will apply its model of edging out competition to gain a monopoly, then raising prices.

After ticking off the problems with all other options, Baradaran turns to the idea of a U.S. Postal Service bank. From 1911 to 1967, the post office did offer savings accounts, attracting millions who previously kept their money under the mattress. At its height in 1947, 4 million Americans held $3.4 billion in postal deposits. Baradaran calls it “the most successful experiment in financial inclusion in the United States” and thinks we’ve reached the moment to restart it.

Not only would a USPS bank reduce inequality by providing credit to millions while potentially saving them billions in fees, it would shore up the Postal Service’s finances and sustain post-office employment as a middle-class career. And it would eliminate payday lenders and check-cashing operators, interested only in skimming a hefty take for providing the financial services the middle and upper classes take for granted.

Thomas Jefferson warned that banks were “more dangerous than standing armies,” and 18th-century Pennsylvania Rep. William Findlay characterized their natural inclination to concentrate power as “incompatible with the principles of a democratic social order.” These fears have been realized in cities like Ferguson, which the mega-banks have abandoned. Disproportionate access to banking robs the poor of the tools they need to escape poverty. If we want to make society more just, we must democratize finance.