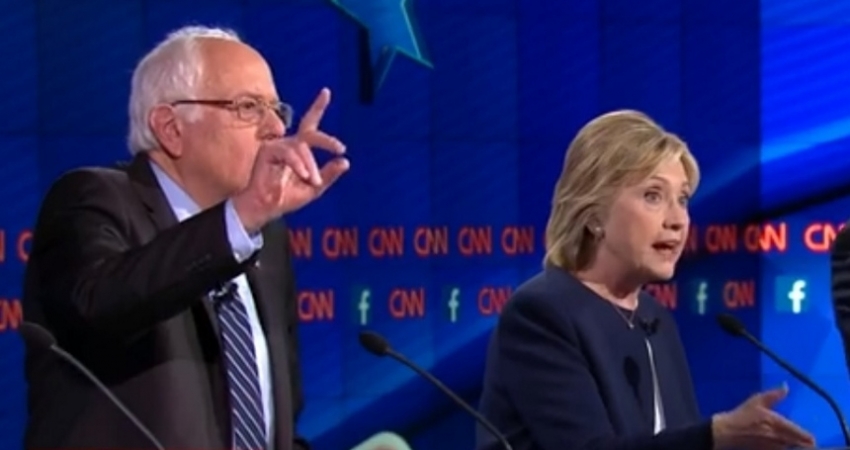 Hillary Clinton’s performance in last night’s debate shows her to be every inch the neoliberal “true believer” she’s a built a reputation as being.

The characteristically Clintonian drive to pander to everyone at once was so strong as to enable her to gracefully drop the implication that there are no small Danish businesses and move right along.

This post is an excerpt from a roundtable discussion about Tuesday's debate that originally appeared on Jacobin.

It was difficult enough eight years ago when Hillary Clinton only had to defend her vote for the Iraq War. This time around, the insurgent candidate she faces, in important ways outpacing even the last guy, talks about “revolution” and “the working class” in the same sentence, and thus puts her in the unenviable position of having to defend capitalism itself.

Not to worry: Clintonian triangulation is nothing if not versatile. Reminding the audience that “we are not Denmark,” Clinton deployed the frame lately popularized by her husband’s one-time labor secretary, Robert Reich, that it is imperative to “save capitalism from itself.”

Sure, she wants to “rein in the excess of capitalism so that it doesn’t run amok and doesn’t cause the kind of inequalities we’re seeing in our economic system.” But the baby mustn’t go out with the bathwater: “We would be making a grave mistake to turn out backs on what built the greatest middle class in history,” she said, praying in aid “all the small businesses that were started because we have the opportunity and the freedom in our country for people to do that.” The characteristically Clintonian drive to pander to everyone at once was so strong as to enable her to gracefully drop the implication that there are no small Danish businesses and move right along.

She tipped her hand, though: pressed repeatedly to agree or disagree with Sen. Sanders’s preference for expanding Social Security, Clinton insisted that she’d rather “enhance the benefits for the poorest recipients of Social Security.” Similarly, as to whether she agrees with Sanders’s health care approach, extending Medicare to everyone, Clinton declined to answer (she doesn’t, though), insisting vaguely that “we agree on the goals, we just disagree on the means.”

Here was the vintage neoliberal approach with which the Clintons are justly associated, unchanged by the financial crises and social movements that have shifted the political terrain since its heyday in the 1990s. The means Sanders favors, the ones that work in Denmark and elsewhere, are universal programs aimed at providing the working class with relief from our dependence on capitalist firms for deriving the means of our own subsistence: public pensions so we aren’t at the mercy of a perfidious “savings industry” and public health care, so we go not merely by the grace of a sector Clinton cited as one of her most prized enemies, but which has contributed more than $11 million to her over her career. (With enemies like this…)

Clinton, instead, clings to the idea that small, politically vulnerable, means-tested programs are preferable to large, universal ones, and that the mediation of a marketplace of profit-obsessed firms is just what America’s sick need to help them heal.

The question of means is crucial, and we should take great heart that the grassroots foment—the movement for black lives, the climate movement, Occupy Wall Street, the low-wage worker movement—whose salience was in constant evidence throughout the debate, are wide open to unconventional means.

Read more from this and many other articles at Jacobin.