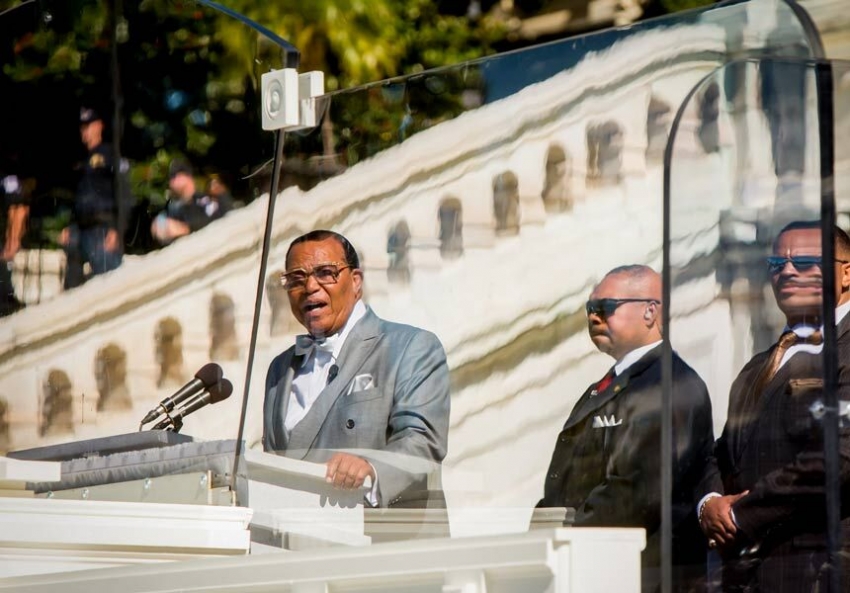 The crowd and speakers at this year's march were a lot more diverse. (Allison Shelley / Getty Images)

The 82-year old Nation of Islam leader filled the National Mall in October. Why didn’t the media take much notice?

Americans filled the National Mall in October for no other reason than they were called to do so by Minister Louis Farrakhan, the 82-year old leader of the Nation of Islam (NOI). That chain of causation is remarkable on its face, but what’s even more remarkable is that this is the second time the controversial leader has summoned such a huge crowd. Yet there is a puzzling absence of media analyses examining the allure of this octogenarian firebrand.

Last April, soon after Farrakhan announced NOI’s plans to commemorate the original Million Man March’s 20th anniversary, the group began publicizing the event as a Justice or Else rally. NOI clearly sought to capitalize on black America’s anger and dismay at the proliferation of police killings of black people. NOI and other supporters mounted a grassroots effort with no corporate sponsors, few establishment endorsements and little promotion in mainstream media. Farrakhan began appearing with hip-hop stars like Young Thug, Ice Cube and Eminem, and materializing on broadcasts popular with youth like The Breakfast Club (on Power 105.1 FM New York City) and Sway in the Morning (on SiriusXM’s Shade 45).

“We utilized a lot of social media, as well as youth-oriented broadcasts and websites to help get the word out,” explains Richard Muhammad, editor of NOI’s The Final Call.

The hard edge and implicit menace of the “or else” message seemed designed to tantalize the young and the reckless. And, in fact, several right-wing media sites interpreted Farrakhan’s message as a call for violence. The Council of Conservative Citizens’ website, for example, headlined the gathering this way: “Farrakhan greenlights violence, calls for racial holy war at massive rally.” Although it was an opportunistic interpretation, they heard Farrakhan’s hint.

In contrast to the 1995 march, which was limited to black men, this gathering welcomed women and summoned a diverse array of ethnicities. Native peoples and Latinos were prominently featured among the speakers. Panoramic photos of the gathering reveal dense crowds stretching from the steps of the U.S. Capitol along the length of the National Mall. Although mainstream media placed attendance in the thousands or tens of thousands, the estimates by eyewitnesses and African-American press were at least several hundred thousand. The Rev. Jamal Bryant of Baltimore, a veteran organizer and logistics whiz who helped convene the march, thinks attendance was over a million.

“It is incredible the number of young people who showed up for this march,” said Tamika Mallory of Justice League NYC, a group responsible for many of the anti-police violence mobilizations in the New York area, which also played a large role in organizing the event. Rather than an atmosphere of austere activism, the march cultivated a spirit of playful struggle, with ubiquitous music and spoken word performances sprinkled through the massive crowd.

There were several celebrities in attendance—Snoop Dogg, Russell Simmons, Puff Daddy, Common, Dave Chappelle—revealing Farrakhan’s increasing acceptance among the entertainment elite, but the paparazzi took a pass. One of the few outlets to provide extensive coverage was NewsOne, an affiliate of the black-owned, Washington-based Radio One network.

The mainstream media’s aversion to Farrakhan is a product of many things, not least the barb of his indictments. Farrakhan is an articulate spokesman for black America’s justifiable grievances, and white Americans are deeply implicated. White guilt is not a good media draw. Farrakhan has also earned an anti-Semitic reputation.

Progressive media was not much better than its corporate counterpart in covering this story. White progressives also have a Farrakhan-aversion, and frankly, that’s understandable. Occasionally Farrakhan dips into racial vitriol to burnish his firebrand credentials. His faith-based conservatism also gives secularists pause. He managed to throw anti-abortion and respectability politics into his National Mall speech.

The enduring mystery of Farrakhan is his ability to attract support from black America’s wide ideological spectrum despite his reactionary subtext. Few could name a black leader other than Farrakhan capable of convening these massive gatherings. That capacity is the product of his unique and enduring charisma, and his position as leader of the only group seen to be utterly devoted to black America’s survival.