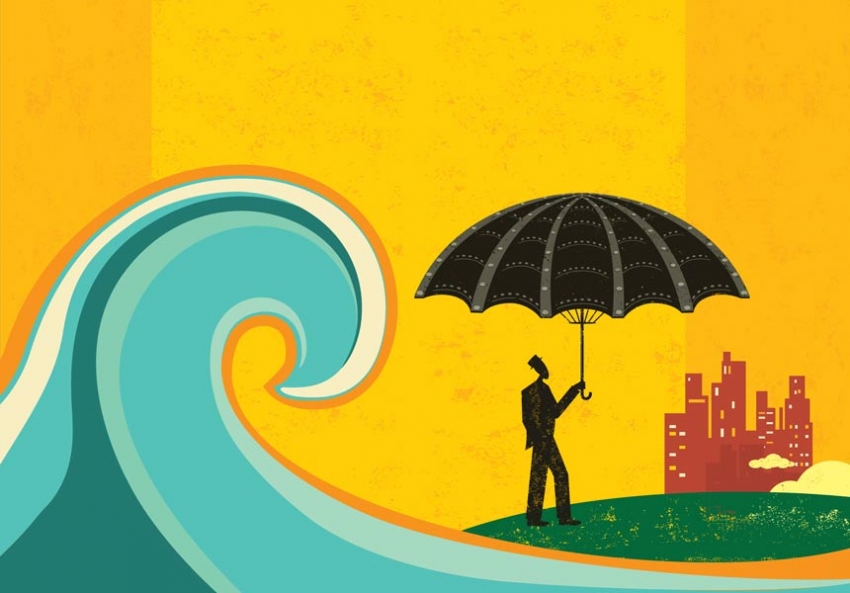 How Wall Street Is Cashing In on Climate Catastrophe

Come hell or high water, the finance industry will make a killing

If you're looking to invest in the cat bond market, the odds are good that even a major storm won't cut into your returns.

Bigger and more expensive storms are brewing. One study found that as much as $507 billion worth of U.S. coastal property could be underwater by 2100. With $416 billion in assets at risk, the Organisation for Economic Co-operation and Development labels Miami as the city that could face the most property damage worldwide as a result of rising tides. Hurricane Katrina already claimed $48.7 billion in insured losses; Hurricane Sandy caused $18.75 billion worth.

Governments, meanwhile, are doing little to prepare. As we head into this year’s climate talks in Paris, prospects seem dim for a comprehensive plan to scale back emissions to the extent required to prevent catastrophic warming. In the United States, Department of Energy scientist Tom Wilbanks has called this country’s crumbling infrastructure, which is woefully ill-equipped to cope with even moderate climate impacts, “a national crisis.” On top of that, our federal disaster response mechanisms remain sluggish, still underfunded and encumbered by the bureaucratic mismanagement that characterized the responses to Katrina and Sandy.

But thanks to Wall Street’s ability to turn a sow’s ear into a silk purse, one disaster management tool is starting to gain traction.

The “catastrophe bond,” devised in the aftermath of 1992’s Hurricane Andrew, is a form of “reinsurance.” Reinsurance protects insurance companies in case they can’t pay out—for example, after a flurry of simultaneous claims following a catastrophic event. Stung by Katrina and Sandy, in the last decade insurance companies and eager investors have fueled an average annual growth of as much as 25 percent in what is known as the “cat bond” market, with a record $8 billion sold to investors in 2014 alone. These financial instruments are also being floated as a solution for the risk incurred by public-sector entities that range from the debt-ridden National Flood Insurance Program to impoverished countries that could face bankruptcy should a massive storm hit.

There’s just one hitch: Cat bonds are fundamentally financial instruments, hawked by Wall Street firms and global reinsurance companies that have no duty to the public.

A cat bond is born

Here’s how cat bonds work: Say an insurance company in Florida is looking to buy an extra layer of insurance for itself in case of a particularly severe hurricane season. It might draft up a contract with a reinsurer that—in return for a hefty fee—will set up a special-purpose vehicle (SPV), a legal entity created specifically to manage cat bond transactions. The SPV then sells cat bonds to investors, whose principal goes into a fund, typically housed in offshore tax havens like Bermuda. These bonds offer investors, who are generally larger institutional players like hedge or pension funds, the promise of steady returns. Payouts come from the insurance company’s premiums, plus any interest that accrues on the investment principal. Should the cat bond “trigger”—in this case, if a “once in a lifetime” hurricane tears through Florida—investors lose their money and the insurance company uses the cat fund to pay claims. Otherwise, investors can claim back their principal at the end of the bond’s term.

In theory, cat bonds are high-risk, high-reward investments that also provide insurers an alternative to traditional reinsurance, which has been around for over a century. In reality, as “speculative” products go, they make a fairly safe bet for investors—which, ironically, is what can make them a risky prospect for insurance companies. As Tom Keatinge, former managing director of JPMorgan Chase’s insurance capital management team, told Bloomberg Business, “For a cat bond to trigger, you need a bull’s-eye to be hit instead of a general shot in the right direction.” In creating the bond, teams of derivatives experts and geoscientists sift through piles of data on past storms and emergent weather patterns in order to model and predict the exact chances that an event will cause a certain amount of damage to a certain place within a certain time period. Only after a catastrophe causes a certain amount of damage or crosses a certain meteorological threshold will the bond be triggered.

As of 2012, just eight of the 232 cat bonds issued since 1996 had paid out. Only one was triggered during 2005’s brutal hurricane season, which caused more than $100 billion in damages. Insurance consulting firm Lane Financial LLC reports that, in sum, investors have lost just $682 million of the $51 billion in cat bonds they purchased in the same period. Using computer modeling, one insurance firm estimates that the probability a storm will be large enough to trigger a payout to insurers is just 2.89 percent. If you’re looking to invest in the cat bond market, the odds are good that even a major storm won’t cut into your returns.

Recently, however, Hurricane Patricia has given some investors a reason to sweat. Investors are anxiously awaiting news on the fate of a $100 million cat bond—MultiCat Mexico Ltd.—structured for the Mexican government in 2012 by Goldman Sachs and the world’s largest reinsurers, Munich Re and Swiss Re, with the help of the World Bank. Whether or not the $100 million will be deposited into Mexico’s disaster fund depends on whether atmospheric pressure within Patricia ever dropped below 920 millibars. The lower a hurricane’s atmospheric pressure, the stronger its force.

None of these concerns have stopped cat bond proponents from extolling their virtues. In July, Goldman Sachs boasted of having structured $14 billion in cat bonds since 2006 as part of its “long-standing commitment to harness markets and deploy capital to scale-up clean energy technologies and facilitate the transition to a low-carbon energy future.” The World Bank, the United Nations and the Union of Concerned Scientists have all heralded cat bonds as a way to leverage private capital markets to protect against climate catastrophe. In 2014, the World Bank created a $30 million cat bond to cover the risk of tropical cyclones and earthquakes in 16 countries, including Haiti.

In the United States, corporations are hyping cat bonds as a private-market solution to the National Flood Insurance Program’s $24 billion debt (caused almost entirely by Katrina and Sandy). The National Association of Mutual Insurance Companies testified before Congress last year that “ceding a portion of the NFIP’s risk to the private sector through reinsurance and catastrophe bonds could reduce taxpayer exposure to future debt.”

Though framed as a convenient, market-friendly means to help governments and insurance companies cope with disaster, cat bonds are no substitute for public sector investment in resiliency and robust federal disaster relief. And judging from these products’ short history, we should be vigilant as to whether the private sector’s “innovative” catbond solution to climate disaster truly serves the public good, or is another way to increase private profits.