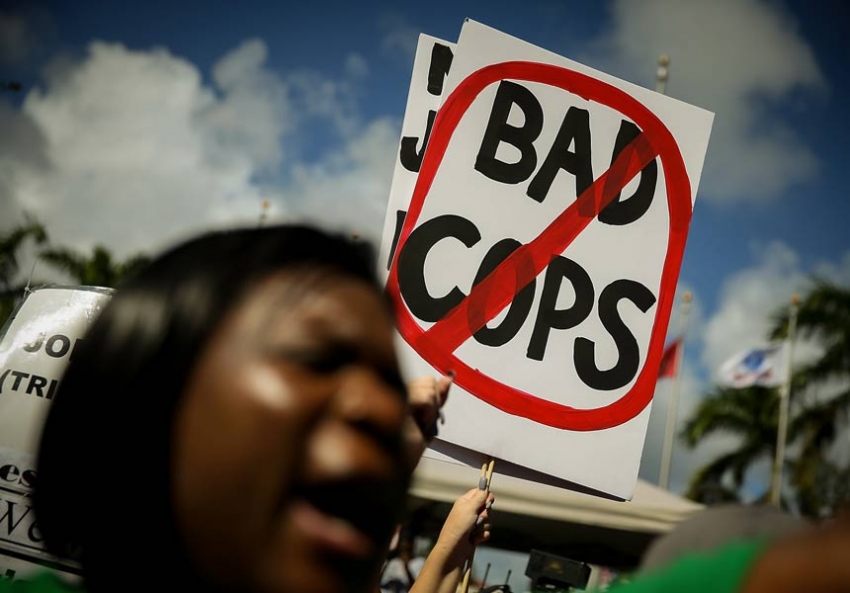 On October 22, protesters in West Palm Beach, Fla.,demand answers in the killing of Corey Jones by an off-duty police officer. (JOE RAEDLE/GETTY IMAGES)

'How do we get rid of police and think about a safe and healthy community when we concentrate poor people all in one area, and then strip all of the resources from that area?'

It has been more than a year since the killing of Michael Brown Jr. by Officer Darren Wilson ignited weeks of protest in the St. Louis suburb of Ferguson. In the ensuing months, the Black Lives Matter movement has swept the entire nation, demanding, among many things, an end to racist police violence. The movement’s impact is unquestioned. Regular reporting on police violence in the mainstream media has changed the misperception that police brutality is rare and perpetrated by rogue officers. In late October, President Barack Obama said of police violence, “It’s real. We … have to take it seriously.”

There is less consensus when it comes to reforming police practices. The 100-page report released in March by Obama’s commission on police reform has had little impact, as the federal government can’t force local police to accept its recommendations. And local calls for reform often founder when they run up against the entrenched power of police departments and police unions. City officials also cite a disconnect within the black community: Some working-class black residents of high-crime neighborhoods want more police.

To discuss what police reform would look like and how we can get it, In These Times hosted a roundtable discussion with Asiaha Butler, president of the Resident Association of Greater Englewood (R.A.G.E.) in Chicago; Cameron Simmons, a trainer and speaker with Restorative Justice for Oakland Youth in California; and Jasson Perez, national co-chair of Black Youth Project 100 in Chicago.

Has Black Lives Matter had an effect on policing in the United States?

ASIAHA: It has helped police in Chicago look at the way they have been operating for some time. It appears as if they’re trying to debunk the myth that it’s a war between black citizens and police, and to work more closely with citizens, especially here in Englewood.

CAMERON: In the Bay Area, we have had circles with the police chief and other officers to help integrate them into our community, which has made a difference on a local level. However, on a national level, there has not been enough effort to reform the police and the tactics they use. I still turn on my TV and see racial violence, and most of the time the perpetrator is the police.

JASSON: Yes, it has put police violence and racial inequality on the table. We now need to build off that to show the link between how black communities are policed in the United States and the root causes of economic inequality. The problems our communities face can be solved, in part, through wealth redistribution like social welfare policies, but we’ve only been given more police.

ASIAHA: This has been going on for generations, so it will take a complete revamping of how we train police. They need cultural sensitivity workshops. And diversity is an issue—not to say that black cops are not part of the problem. In a community like Englewood, which is 99 percent AfricanAmerican, when a crime happens on my block, everybody is a suspect. I am a landlord and a homeowner and I’m married—but my husband is a suspect, I am a suspect. It is a weird dynamic. Something has to be done before they even get into the force, before they are out here in our community.

CAMERON: To me, it looks like police working with the community instead of harming the community. However, this seems unachievable in the African-American community due to the distrust on both sides. In order to fix the distrust, the two parties have to feel connected to each other. It could mean that a panel of community members selects the officers who patrol their neighborhoods. Or that police have to live in the same places they patrol.

JASSON: We also need to have a conversation about other ways to ensure community safety and accountability: restorative justice hubs, peacekeepers. If folks took CeaseFire more seriously and funded it better—because it is grossly underfunded, and the police and communities often worked to undermine it—I think you would see far better results and get closer to the safer community that black folks want.

Most African Americans have either experienced police brutality or know someone who has. Yet in poor and working-class black neighborhoods there is a crime problem. People in neighborhoods like Englewood or Lawndale who want more police protection would probably be taken aback by the suggestion that the police budget be slashed. What would you say to them?

JASSON: That is going to be one of the hardest things for Black Lives Matter. And Black Youth Project 100 does political education in communities because of this. When we met with the mayor to get the city to enforce marijuana decriminalization, they showed us—I don’t know if it was true or not— the number of calls that they get from residents in regards to misdemeanor marijuana possession and black neighborhoods had the highest rate of folks calling in. But people don’t get to see or hear alternative ways of keeping their community safe if all they are fed is police, police, police and when they turn on the TV it’s six or seven shows based on policing. I have these conversations with my grandma. She is a middle-ofthe-road Democrat who thinks police brutality is bad but also believes that crime in her community is bad. Having those kinds of contentious conversations is productive.

ASIAHA: Rather than cut police budgets, the funds could be allocated to foster more cohesiveness between the citizens and the police. Don’t have more folks on the force, but have better people on the force. We have a lot of petty theft, a lot of shootings in Englewood. But even with additional police our crime rate has not significantly dropped here. We have called several times about a home that we know is selling drugs, and there is no activity to eliminate that situation. We need to find more creative and innovative strategies to make our communities safe.

Several police chiefs from around the country, including Chicago’s Garry McCarthy, have called for reductions in incarceration rates, yet they cling to broken windows policing. Is there a contradiction here?

JASSON: Politicians and chiefs of police make these claims that they want to “police smarter,” but police training gets in the way, and it is just rhetoric that’s not backed up by actual institutional reforms. They’re just trying to preserve their jobs and their budgets and their power.

If we understand that there is a relationship between crime and poverty, then it seems like we need to talk about more than police reform. How do we create neighborhoods and communities where policing is not the first thing we think of?

ASIAHA: The issue is segregation. You have concentrated areas of poverty. How do we get rid of police and think about a safe and healthy community when we concentrate poor people all in one area, and then strip all of the resources from that area? Those are structural things that we have to talk about.

JASSON: It’s about economics and economic inequality. What makes a community safe is everyone having access to either a basic income or a living wage job. It’s not a coincidence that the highest levels of unemployment in Chicago coincide with black neighborhoods and also those with high crime. Criminalization—particularly of black people—functions to stigmatize those most impacted by economic, social and political inequality as deviant, troubled or pathological. It doesn’t allow for a conversation around the root causes of inequality.

CAMERON: At Restorative Justice for Oakland Youth, I suggested we sponsor block parties to get the community to come together and learn about their neighbors and get a better understanding of each other’s culture. That way they won’t be scared to talk to their neighbors instead of calling the police. They will be less likely to handle situations violently or with the aid of the police force. They would be able to manage conflict themselves. It’s like self-policing.

JASSON: The solutions are there, they’re just being underfunded. The things that aren’t part of the solution— and are in fact part of the problem, which is police in my opinion—are the ones that are being overfunded.

ASIAHA: A lot of us who do this work are skeptical that a real solution is even something that anyone wants. Do black lives really matter? Are people really concerned about the poor and the folks who made wrong choices? When we see certain things happening in our communities, it makes us think, “Is this really what people want? Do they really want the killing to stop?” Because violence—black on black, or police on black—is still a lucrative, sensational business that so many people are eating from.