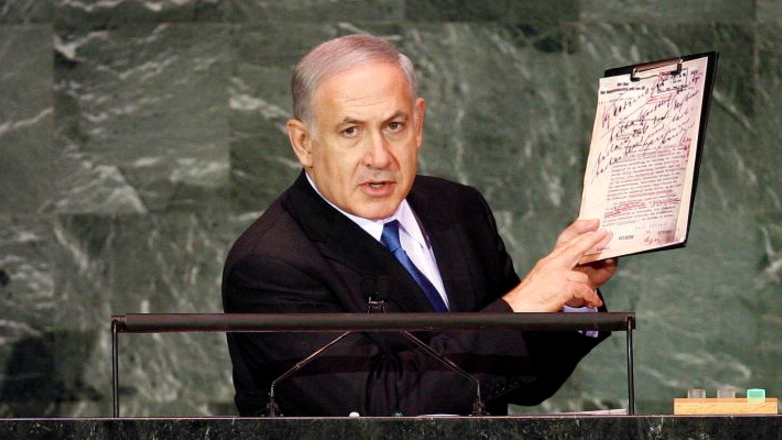 The center-left think tank has come under fire for inviting the far-right prime minister to speak. Will they seize the opportunity to ask tough questions?

How can you tolerate the extrajudicial executions of Palestinians, only some of whom are even terror suspects?

This afternoon, Israel’s Prime Minister Benjamin Netanyahu will speak at the Center for American Progress (CAP). CAP, a think tank which has close ties to the Obama administration and usually espouses left-leaning views, now faces a backlash from progressives around the country for hosting and thus validating the right-wing leader, with a petition circulated by Jewish Voice for Peace garnering the signatures of MoveOn co-founder Noah T. Winer; president of the American-Arab Anti-Discrimination Committee Samer Khalaf; journalist and activist Naomi Klein; and numerous other progressive figures and organizations.

Netanyahu’s visit is meant to repair bridges burnt during his last trip to the United States in March, when he addressed an open session of Congress that many Democratic lawmakers chose to boycott and notoriously attempted to torpedo the Iran nuclear deal. Regardless of the propriety of CAP’s hosting Netanyahu, the fact that the Prime Minister is speaking and answering questions from the think tank is an opportunity for the CAP staffer tasked with engaging with him to ask him some tough, revealing questions. Here are five questions CAP should ask Netanyahu.

1. How can you tolerate the extrajudicial executions of Palestinians, only some of whom are even terror suspects?

Of the 68 Palestinians killed by the IDF during protests and unrest in October, only 43 were even suspected in terror incidents like the recent rash of stabbings of Israelis by Palestinians. Israeli security forces also injured over 8,260 Palestinians, 2,617 with live or rubber-coated steel bullets. Clearly, in the eyes of Netanyahu’s administration, the 6 million Palestinians living under Israel’s “democratic” rule deserve neither the right to a trial, nor presumed innocence.

2. Why have you ignored the opinions of your own generals as to the cause of October’s violence?

During October, three IDF generals, including the chief of Military Intelligence Herzl Halevi, argued that frustration with Israel’s actions and policies constitutes at least some of the reasons for the month’s unrest. Netanyahu, however, has steadfastly refused to accept this.

3. Do you believe in a two-state solution?

Netanyahu has been constantly self-contradictory on this seemingly simple question. In 2009, he said that if Palestinian leadership recognized Israel as a Jewish state, “We will be ready in a future peace agreement to reach a solution where a demilitarized Palestinian state exists alongside the Jewish state.” Yet, in the days leading up to his reelection this past March, he promised that so long as he remained Prime Minister, there would be no Palestinian state. Though he later qualified that statement, Netanyahu should be made to answer whether he truly believes in a two-state solution.

4. Why has your administration not yet charged the suspects of the Duma arson?

On July 31, in the dark of the night, two Jewish terrorists reportedly set ablaze a home in the village of Duma, located in the West Bank, after scrawling “Revenge” and “Long live King Messiah,” the motto of orthodox Hasidic group Chabad, on its walls. The arson led to the deaths of three of the four members of the Dawabsheh family, including 18-month-old Ali.

In September, Israeli Defense Minister Moshe Ya’alon said that “The security agencies know who is responsible for the [Duma arson attack] but are abstaining from putting them on trial in order to not expose intelligence sources in court.” We have heard nothing since. Will Israel continue to refrain from prosecuting attacks that Netanyahu himself has called “terrorism”?

5. Why are so many critics accusing you of inciting violence against Palestinians?

October was a violent month for Israel and Palestine, witnessing the killings of dozens of civilians and suspected terrorists by security forces and armed vigilantes. During this time, Netanyahu continued to egg on anti-Palestinian sentiment, even going so far as to blame a Palestinian, the former Grand Mufti of Jerusalem, for the Holocaust. In response, Israeli mobs attacked Palestinians—and those who looked Palestinian, like Mizrahi (Arab) Jews, an Eritrean asylum seeker, and at least one Bedouin—indiscriminately. This is part of a long-running theme of Netanyahu’s time as prime minister. His recent reelection campaign, for example, focused on demonizing Arab Israelis.