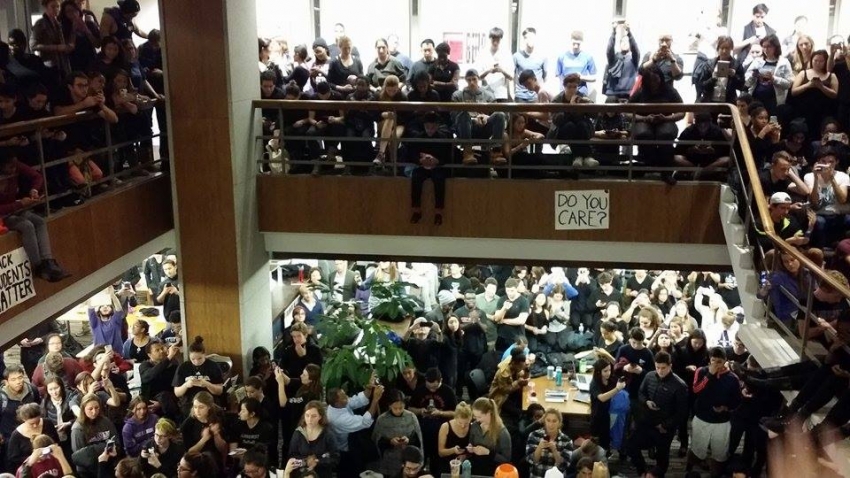 The students join what appears to be a growing wave of student activism around racism at universities around the country.

"[We're] really trying to incorporate teachings about racism into our curriculum. Not just on our campus, but in our history."

Student activists at Amherst College, a small liberal arts institution in Western Massachusetts, are the latest to join students of color protesting racial injustice in schools across the country.

The national movement began at the University of Missouri, where a hunger strike from Jonathan Butler, a black graduate student, was supported by striking football players, forcing the school’s president to resign on November 9 over what the activists say was his unwillingness to address numerous racial incidents that occurred under his watch. At Yale University, a series of emails on offensive Halloween costumes and the over-sensitivity of students blossomed into mass protests about racism on campus.

At Amherst College, what began as a sit-in in the school’s Frost Library on Thursday in solidarity with student activism at Missouri, Yale, Ithaca College and similar institutions then developed into a protest of racism at Amherst itself, and eventually evolved into a movement calling itself Amherst Uprising. (Full disclosure: I am actively involved in AC Voice, a publication on Amherst's campus, and Amherst United Left, both of which have taken formal stands in support of the protests.) College president Biddy Martin had previously been en route to Japan when she learned of the protest and flew back from Washington, D.C. to arrive at around 9:30 PM.

Upon her arrival at the tense, packed library—some estimate that as many as three-quarters of the campus was present at this time, some 1,200 students—Martin was presented with a list of eleven demands, detailed here. Many of the demands were for apologies from various administrative officials, excuses from classes for students participating in the protest and promises that the job security of faculty, staff, and administrators supporting the demands would not be threatened. However, student activists also noted that these demands were merely the precursor to a list of short- and long-term requests that would be forthcoming.

Following the presentation of the demands, the organizers announced to thunderous applause that, until a genuine response to the demands was initiated, Amherst Uprising would continue to occupy Frost Library, where students still remain.

Despite this escalation, the protestors have overall stressed a strategy of cooperation with the administration. Students don’t feel that President Martin has done anything wrong; rather, she has overseen a college that has not done enough for students. Amherst Sophomore Irisdelia Garcia said that students of color need “Better support spaces. The counseling center is not enough. The counseling center’s performance has not been acceptable, in my opinion.”

Garcia went on to recommend two more long-term goals. “Really trying to incorporate teachings about racism into our curriculum. Not just on our campus, but in our history.” Garcia says doesn’t feel that the narratives of people of color are taught in classes like history and American Studies. Lastly, Amherst needs “spaces where students can have uncomfortable but healthy dialogue about these things.”

Other long-term goals proposed in the early hours of the sit-in, where an open mic facilitated discussion between students, included the hiring of more faculty of color and support for these faculty members. Activists say many faculty members and staff of color have left Amherst in recent months.

The protesters’ commitment to what they call “radical compassion” has led to the movement’s willingness to work with the administration. Protesters say they are prioritizing inclusivity and equality. In a statement, organizer Caroline Rose explained that “The ultimate goal of our movement is to create a free, safe and equal space where all students, marginalized or not, can feel at home. … Our creation of safe spaces, of communication, allows us to speak our truths, understand one another and does no small bit of anti-racist work.”

Organizers say they hope not just to encourage engagement with issues of race, gender, sexuality and other facets of identity, but also to spread understanding of the pain inherent to being a member of a marginalized group in a society of systemic oppression. This understanding, they say, will provoke real change and allow all students to feel safe on campus. In the spirit of radical compassion, Garcia describes Amherst Uprising as “full of anger but not aggression.”

The occupation of the library has continued to today, and organizers recently announced that it would extend at least until this evening. Campus police provided protestors protection overnight and have not indicated they plan to remove students from the library. The occupation has generally been characterized by a jovial atmosphere, including performances from various musical groups. Sleeping bags for those remaining overnight were provided by the Outing Club, an outdoors organization on campus. Sympathetic faculty and departments have also provided food for the student activists.

Since the start of the sit-in on Thursday, the number of students present has fluctuated, with anywhere between 400-600 during the day and around 100 at night. The majority of those present are students of color, as are most of Amherst Uprising’s organizers. Students have organized crews to pick up trash and keep the area clean. The buzz of conversation in the library can be heard at all times on the first floor, and the Center for Humanistic Inquiry on the library's second floor has been converted into an organizing space.

Numerous students have described the occupied library as a community, embracing inclusivity and challenging preconceived notions of race and racism. Garcia noted that “You saw students popping into Frost to check out a book and then being welcomed … into this community of teaching and education.” Students have spoken out about their experiences with racism on campus through open mics and informal discussions.

By Friday morning, the protests had garnered the attention of local and national media. Both the Daily Beast and the Washington Post ran negative pieces about the uprising. Like many campus movements in recent days, Amherst’s was criticized as opposing free speech and academic freedom, with the Daily Beast’s headline reading “Amherst Students Protest ‘Free Speech,’ Demand ‘Training’ for Offenders.”

But students say they aren’t interested in stifling free speech—rather, they want to expand it to marginalized groups who have been denied such freedom in the past.

Amherst Uprising media representative Andrew Lindsay alluded to this in his own explanation of radical compassion. “What our movement stands for is the creation of equal spaces for individuals that didn’t necessarily have them in times past. We want to be able to create spaces where marginalized students and non-marginalized students will be able to speak together on the same terms,” he says. “That’s pretty radical to me.”