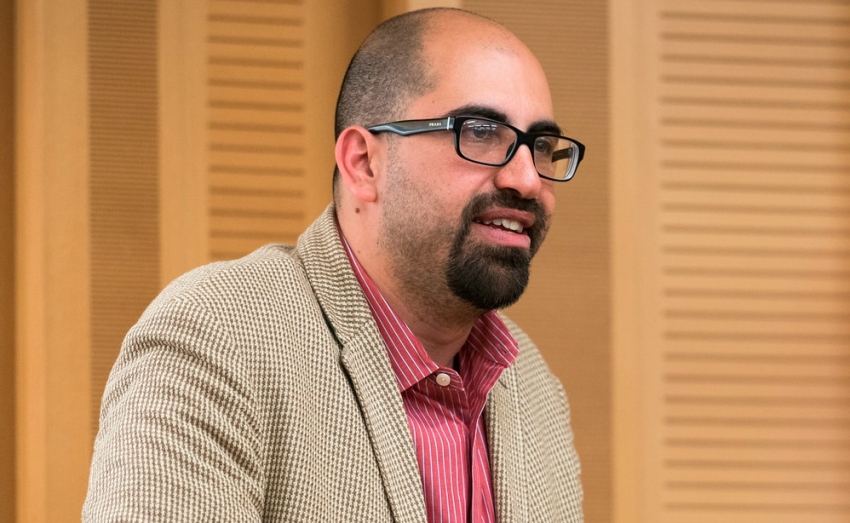 Salaita’s settlement is a victory for him and academic freedom. But will we ever know who was watching him—and us?

What the Salaita case most reminded me of was the rise of McCarthyism and the Red Scare, which destroyed careers and lives through the very kind of manipulation of words and ideas seen here.

My heartiest congratulations go out to the Center for Constitutional Rights and their client Professor Steven Salaita, who deservedly was awarded $875,000—far less than the assumed amount of wages he would have garnered over the next few decades as a tenured professor—by the University of Illinois to settle the lawsuit brought against them.

But although I’m glad for his victory and all that it means for academic freedom around the country, I have to say that I am saddened that we will not see a full trial on this case—leaving so many important questions unanswered.

When the news that the University of Illinois had rescinded its offer of employment to Saliata due his alleged ”anti-semitic” remarks,” I was immediately suspicious. My own criticism of Israel had often earned me the disdain and ire of the crowd that sees defense of Israel—right or wrong—as the measuring stick of being a “real” or “good” Jew. I had to wonder whether the charge of anti-semitism was deserved or just another instance in which criticism of Israel’s policies was wrongly equated with anti-semitism.

I had read Salaita’s tweets in the New York Times and elsewhere, and while I could understand while some might have found them offensive, I certainly didn’t feel that they were anti-semitic. But I wondered if and why papers like the Times hadn’t asked, ”Were these handful of tweets indicative of the sum total of what Salaita has said on Twitter? If not, were they indicative of his general writings and thoughts on the Internet?”

Going to his Twitter account, I found the answers. As of September 2014, around the time when he first wrote the controversial tweets, Salaita had written more than 9,000 tweets.  And among them, these few—all written during the Israeli bombing of Gaza—were the only ones that could even possibly be construed as anti-Israel, let alone anti-semetic. And of those few, almost all were written during the four days in July 2014, when thousands of Palestinians (mostly women, the elderly and children) had lost their lives and homes to an incessant Israeli bombardment—a bombardment that drew anger and opposition from millions throughout the world and the condemnation of  virtually every human rights group in the world. Salaita’s tweets were angry—but the slaughter of hundreds of unarmed civilians should make everyone angry.

The questions for me, then, as they should have been for the university and most certainly for any decent reporter were, “Who was watching? Who was reading Salaita’s Twitter account closely enough to cherry pick 10 from among the thousands? And why?”

A few days later, while perusing the media reports about the case, I stumbled across a list of over 200 other professors—Arabs, Jews and others—who were being targeted as being anti-semitic, unfit to teach and which called for all federal funding to be denied to those professors and Middle East Studies programs. Their crime? Signing a petition in support of the boycott of Israeli goods and institutions. The organization behind the petition? A group known as AMCHA, an organization founded by Professor Tammy Rossman-Benjamin of the University of California-Santa Cruz.

But AMCHA was not alone.  Operating on campus and targeting as anti-semitic both professors and anti-Israeli occupation student groups are a number of apparently well-funded groups from Stand With Us, which receives large amounts of funding from the Israeli government to Campus Watch, the Anti-Defamation League, the Simon Wisenthal Center and Campus Macabees, the new organization backed by right-wing billionaire and casino king Sheldon Adelson.

Were any of these groups involved in targeting and defaming Salaita?  Or are there others? Was Salaita’s firing an isolated incident that seems to have partially backfired, or was it a trial balloon for ridding our nation’s campuses of anti-occupation professors and groups? Was Salaita’s treatment the result of a zealous individual or part of a larger scheme that has tried to squelch the boycott, divestment and sanctions (BDS) movement by trying to pass laws in state legislatures, city councils and elsewhere making divestment illegal?

Why are these questions important? Because even beyond the critical issue of academic freedom lies the bigger issue of freedom of ideas themselves. What the Salaita case most reminded me of was the rise of McCarthyism and the Red Scare, which destroyed careers and lives through the very kind of manipulation of words and ideas seen here.

While most who think of that period as an aberration (if they think of it at all), the same pattern, if not exactly the same forces are present in the Salaita case.  Here, in what may or may not eventually may be exposed to the full light of day, we see the impact of a new right-wing alliance that involves the complicity of university officials in demonizing a certain kind of political discourse, and the willful ignorance of the mainstream media which becomes an echo-chamber for the university, repeating unexamined half-truths and distortions.

While I am happy for Steven Salaita and congratulate the Center for Constitutional rights for what they’ve won, I am sorry for what we’ve lost: the ability to know the answers to these questions—answers that could only have come from a full trial.