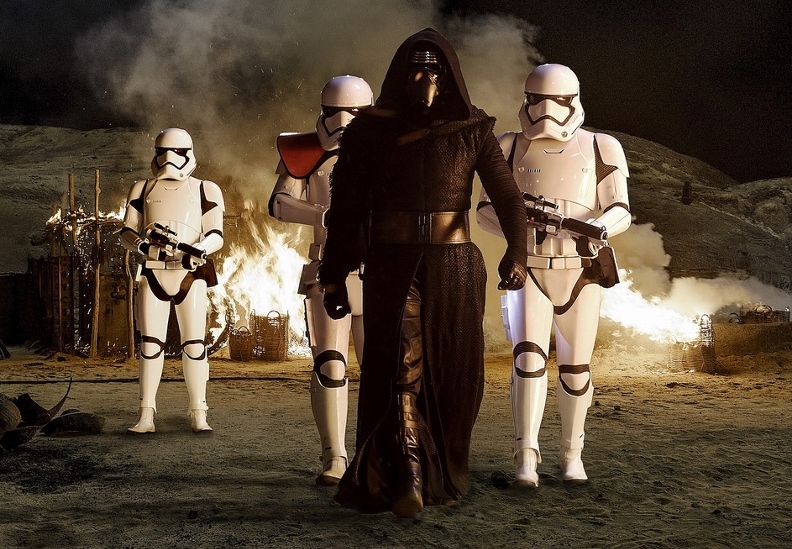 With Star Wars: The Force Awakens racking up more and more acclaim, have audiences forgotten the narrative complexity and moral ambiguity cinema is capable of?

It has come to my attention that critics who aren’t totally enthusiastic in their praise of Star Wars: The Force Awakens have received death threats from fans. So I’ve been warned.

Andrew O’Hehir of Salon was apparently the first reviewer to pan the film, thus ruining its perfect Rotten Tomatoes 100 percent Fresh score and earning the terrifying enmity of people who sometimes dress as Wookies and Ewoks.

Though, as O’Hehir pointed out in a published response to the comments urging him to kill himself, his criticism was relatively mild. He argued that too much emphasis was placed on the return of the trilogy’s beloved characters, Luke Skywalker (Mark Hamill), Han Solo (Harrison Ford), and Princess Leia (Carrie Fisher). And by having the new characters Rey (Daisy Ridley), Finn (John Boyega), and Poe Dameron (Oscar Isaac) enact a plot broadly similar to the first Star Wars film back in 1977, The Force Awakens was too familiar, a retread rather than a reboot.

Frankly, I could say far worse things about the film, oh so many things that would presumably lead to my assassination by a fanboy death squad. The Force Awakens is one big mass of holes and botches—the kind of big, open, inviting targets that seem to beg you to hit them, in the immortal words of Resistance fighter pilot Poe Dameron, “with everything you’ve got!”

There's that hilarious moment, for example, when menacing Kylo Ren, dressed like Darth Vadar Jr., takes off his helmet and mask to reveal comic actor Adam Driver looking like a slightly depressed teenage wanker in a woman’s wig from the 1970s.

And then there are the big exposition dumps in dialogue form, such as (SPOILER) when Princess Leia says to Han Solo, “As you know, we had a son who went over to the dark side because you and I neglected him during his formative years, so when you meet him, please try to win him back. He’ll be the guy in the bad wig.”

Or words to that effect.

For a non-believer, it’s brutally ironic to see Carrie Fisher back to playing Princess Leia, the role that made her a star 5,000 lines of cocaine ago, stuffed into a boxy vest to hide her middle-aged bulk, one side of her mouth permanently downturned in a sardonic scowl no plastic surgery could remove—it’s the fixed result of decades of delivering scathing one-liners about her insane Hollywood experiences. With a voice that’s now a bitter barroom croak, she nevertheless has to croon as if she were still a dewy young 20-something fresh out of rehab, “May the Force be with you!”

But to a believer, it’s simply wonderful to see her back: Princess Leia, now General Leia! And so convincing in her role!

I could go on, but… better not. I realize this ain’t my kind of film franchise, and I’m looking at it as a total outsider, not really understanding it. The Star Wars experience that first gripped my peers when we were kids back in ’77 never laid a glove on me. I remember a friend once telling me, when I marveled at the way he kept going to see Star Wars films even when the prequels were consistently stinking up theaters world-wide, “Eileen, you have to understand, we’d all go see Obi-Wan Kenobi Mows His Lawn.”

I have a number of friends who are sweetly devoted to Star Wars, who have patiently endured the worst George Lucas could do in the form of godawful prequels and cartoons, as they waited in joyful hope for this, the Coming of the One True Sequel to their beloved Star Wars Trilogy. And I try to respect other people’s religion even when I can’t share their belief system. I genuinely wondered what could make The Force Awakens seem better than anything else in the cinematic universe.

“Tell me of the only true faith,” I said to my friend. (A different friend. I’ve been canvassing a lot of people.) “Explain Star Wars to me.”

But that’s an impossible request, I realize. When you’ve grown up in a religion, it’s in your bone marrow and beyond anything you can put into mere words.

She was able to explain how Andrew O’Hehir went wrong, though. “He didn’t get it,” she said. “The fans wanted to see the Star Wars trilogy revived. That was the whole point, going back to recover those first ones that we loved. With this movie we could finally say ‘Aaah, it’s back.’”

“And,” she added more severely, “he doesn’t seem to understand genre film, especially sequels that are also genre films. They require familiarity, they have to build on a base of rock-solid conventions. The difficulty of each genre film is having to add new elements without ruining the effect people loved in the first place, or its cultural relevance.”

You see, it’s not that I don’t appreciate the level of difficulty involved in making such films. I’ve always said it would be far easier to write an art film expressing your supposedly brilliant and uniquely personal vision of the world than it would be to make a genre film that saves a popular film franchise. I’m not some high culture buffoon like J.R. Jones of the Chicago Reader, whose huffy one-paragraph review of The Force Awakens begins, “The franchise that wrecked American cinema is back,” and ends, “As with other installments, this is less a movie than an exercise in massaging a juvenile-minded audience that wants the experience to be new and familiar at the same time.”

I presume J.R. Jones has already been murdered by Star Wars fans. Somebody ought to check on him.

The problem for me is, Star Wars engages with none of my preferred genres except the action film, though the action scenes in Star Wars are generally of the old-fashioned action-adventure kind that strikes me as pretty lame. (Don’t even get me started on those limply choreographed sword fights in The Force Awakens!)

I’ve never gotten into films involving the equivalent of magic swords, I don’t know why. And The Force Awakens seems to be organized around one, the hilt of a light-saber that’s being passed around like a baton in a relay race, all with the maximum seriousness associated with Freudian symbology in the old days, before people started laughing at it.

For an outsider looking at the Star Wars franchise, its ongoing and overwhelming international success is strange. The first film, sure—it was a novelty at the time, featuring state-of-the-art computer technology, and countering the long siege of feel-bad 1960s-1970s cinema that, though frequently brilliant, was a colossal downer. But subsequently, it’s been a shocker to watch the majority of the population embrace another 40 years’ worth of Star Wars sequels and prequels that are so earnest, so proudly simple, with such straightforward heroes and villains, so loaded up with actors declaiming the most awkward speeches and cracking jokes in the corniest way.

Watching Star Wars films, it’s as if the whole 20th century modernist experience never happened, the one that gave us popular anti-heroes and menacing worlds of moral complexity and revisionist genre films that cast off white hat vs. black hat binaries. And I thought we all liked those!

This bypassing of narrative complexity was quite intentional, as everyone knows by now: George Lucas set out to revive the gee-whiz action-adventure serials of his own 1950s boyhood, designing the first film in terms of Joseph Campbell’s now discredited “monomyth,” with its Hero and Journey and Villain. Writer-director J.J. Abrams, a devoted fan of Lucas’ Campbellized vision, is remarkably faithful to it in The Force Awakens. There are the three young heroes of banked power and promise, all destined to be “with the Force” big time, all played by actors of considerable verve wrestling bravely with dialogue that would defeat the greatest performers the world has ever known, and all so clearly and thoroughly good, it made my heart sink to contemplate them.

I briefly pinned my hopes on Finn, the former Stormtrooper who deserted the Dark Side and (SPOILER ALERT) in joining up with Rey, briefly pretended to be a Resistance fighter. He was lying, in other words, like a regular human being. But then Han Solo cautions him, “Women always find out the truth—always!”

So Finn tells Rey the truth, and interactions that had threatened to get a bit tricky and interesting smoothed out immediately. And that’s how things go in Star Wars. The good characters support and rescue and josh with the other good characters, and develop almost instantaneous bonds. The bad characters stalk around angrily in black capes and participate in Nazi-like rallies. The supposedly conflicted characters torn between the light and dark sides are so ridiculously awful you never for one second think they can be redeemed, or, if they are redeemed—looking at you, Darth Vader—do it suddenly at a climactic point right before death, so no complexity will have to be sustained for long.

Only people committed to the Star Wars franchise could take Oscar Isaac (Drive, Inside Llewyn Davis, Ex Machina), one of the edgiest, oddest, greatest, and most intense actors working today, put him in a square haircut, and make him play a straightforwardly gung-ho fighter pilot who keeps yelling, when enemy aircraft is sighted, “We got company!”

Couldn’t Isaac at least have taken on the humorous maverick role, updating Han Solo, giving him a chance to display his gritty deadpan humor? In The Force Awakens he was given exactly one line in which to demonstrate what he could do, by cutting through the melodramatic silence before being interrogated by Kylo Ren: “So how does this work, do you talk first, or do I talk first?”

For me, there’s nothing to be done during Star Wars films but wait for the occasional bit of comic relief. Chewbacca is reliably funny, for example. He also has the advantage of a cool costume to hide in. Han Solo is a godsend for the same reason, since Harrison Ford always seemed to have an instinct for action-adventure dialogue and puts a nicely humorous spin on even the hokiest lines. Ford helps out the young folks with this, elevating scenes with Ridley and Boyega—the dialogue almost seems snappy with him around. Ford returns to the franchise with glee, smirking wryly throughout and delivering the best in-joke line about how familiar this narrative is by now. When contemplating one of those holographic maps in the air, for example, looking at the latest, largest Death Star that has to be destroyed, he provides the meta-commentary: “OK, so it’s big. How do you blow it up? There’s always a way to blow it up.”

But Han Solo represented another extinguished hope for me when watching The Force Awakens, because—

Well, I can’t tell you why. That’s a major spoiler, and I’m on too many enemies' lists already.