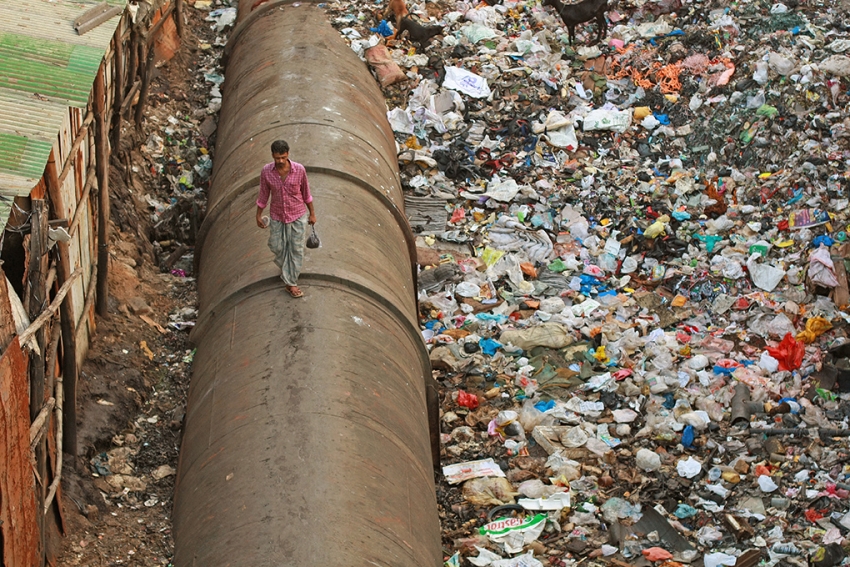 A resident of the Dharavi, Mumbai, slum walks home alongside a trash heap. (Meena Kadri / Flickr)

The Bankruptcy of India’s Economic and Political “Miracle”

India is neither the vibrant global South democracy nor the poster child for globalization’s benefits that global political elites have insisted it is for over a decade.

In 2008, under the aegis of a Congress Party-led coalition government in India, the country was rocked by one of the biggest scandals of graft and corruption it had ever seen. The scandal was led by Andimuthu Raja, a member of a regional party that had formed a coalition with the old dynastic Congress Party, who became the minister of communications in 2007.

The scandal, the “2G spectrum” scam, involved the sale of bandwidth licenses to select telecom companies at underpriced rates. In exchange, Raja received millions of rupees in kickbacks. The loss to the Indian government due to the 2G spectrum scandal was estimated between US$8-10 billion. In 2011, Time ranked the scandal second on an “Abuses of Power” list—right behind Watergate.

Even as the Central Bureau of Investigation (CBI) raided Raj’s residence, finding bank notes in pillowcases and suitcases, it became clear that the corruption scandal implicated not just one minister but India’s political system as a whole. Raja was immediately arrested but the court cases—and insistent calls by opposition parties to investigate the role in the scandal of then-Prime Minister Manmohan Singh—rumbled on for years.

The 2G spectrum may be one of the most egregious cases of graft the country has ever seen, but such scandals are now a routine feature of politics in modern India. Without fail, with each scam, corruption is revealed as extending all the way to the uppermost echelons of the Indian political establishment.

This India, depicted in elaborate detail in Dilip Hiro’s The Age of Aspiration, is neither the vibrant global South democracy nor the beneficiary of globalization par excellence that global political elites have insisted it is for over a decade. Instead, it is a country mired in a corrupt nexus of businessmen and politicians, spectacular wealth juxtaposed to ever-deepening penury and the brutal suppression of all those opposed to India’s neoliberal path. As such, Hiro’s work serves as a much-needed rejoinder to the global image of “India Shining,” an electoral marketing slogan invented by India’s ruling political party.

Today, the ruling political party, the Hindu fundamentalist Bharatiya Janata Party (BJP), garners much negative publicity because of the rising culture of intolerance of minorities its rule has ushered in. International spectators are surprised by the extreme turns they see India taking of late. But in Hiro’s account, the business-friendly policies of successive Congress and BJP governments have for decades been fashioning an Indian image of gleaming new cities and thriving IT infrastructures that hides the deep corruption and poverty that have accompanied India’s pro-business policies.

In turn, the brutal suppression of dissent and deepening inequality have long accompanied these reforms. The Modi government only deepens the rot and ruin that previous governments accomplished.

Hiro begins his account with the city of Gurgaon, which he calls “New India in miniature, with all its achievements and failures. … But scrape the surface ever so slightly and you discover a dark, Dickensian underbelly.” Hiro’s focused narrative elucidates how corporate executives jet to and from their Western multinational offices in Gurgaon, a city built upon an underclass that populates the slums dotting the periphery of Gurgaon. It is a vivid account of the concerted effort on the part of Indian politicians to give wide, often illegal, berths to corporations in Gurgaon and facilitate massive construction projects that enabled the return and settlement of wealthy expatriate Indians to Gurgaon to helm its many corporations.

Appropriately, The Age of Aspirations is replete with colorful and sordid tales of sleaze and corruption that follow politicians and businessmen alike—characters who Hiro unfailingly introduces with flamboyant physical descriptions. (He describes the CEO of a large steel plant as a ”slight man with a skinny, tapered face … jug-eared.” Later on, the populist social activist Anna Hazare is introduced as a man with ”fat, crumpling cheeks.”) Many of Hiro’s stories are traced back to the reverberations of Delhi’s 1991 introduction of the New Economic Policy (NEP). A set of pro-corporate reforms that followed after India was granted an IMF loan requiring the reduction of the fiscal deficit, the NEP is seen by many who follow the political economy of India as the main driver for the precipitous economic growth that India saw towards the end of the century.

The twin moves of providing the private sector untrammeled access to public licenses and resources like coal and steel, and disinvestment from the public sector allowed India to join the ranks of the “emerging economies,” but did little but make things worse for the immensely poor. As Hiro describes in detail, the NEP put India on what the country’s elites saw as a righteously neoliberal path—one in which few other than the wealthy and connected would gain. Two decades after the introduction of the NEP, income inequality in India had doubled.

The structure of Hiro’s narrative provides a compelling case for just how distorted of a “democracy” India has become. The book begins with tales of colossal wealth and segues to an in-depth chronicling of immense corruption scandals brought to the fore by intrepid Indian journalists. In a subsequent section of the book that deals with the anticorruption activist Anna Hazare, whose Gandhi-inspired civil disobedience tactics to force an anticorruption bill through parliament inspired a larger anticorruption movement, Hiro is entirely justified when he writes: “Team Anna’s statements echoed what Maoists had been saying for a long while. At their core, there was no difference between political parties, and politicians of all hues were united in safeguarding the privileges that the political class enjoyed.”

Hiro’s major achievement is his exhaustive account of the development of an all-powerful political class. His broader arguments, however, hold up less well in his discussion of the decades-long Maoist insurgency in India.

A splinter group from the Communist Party of India, Maoist guerillas (the Communist Part of India [Maoist] or colloquially, the Naxalites) have held de facto control of parts of the Indian mainland; in 1967, the Naxalite movement spread from a peasant uprising in Naxalbari, northern Bengal, to the countryside and cities of southern and eastern India. Clashing regularly with Indian paramilitary agencies and the army over the years, Maoist guerillas have consistently waged armed struggle, Mao’s “people’s war” against the Indian establishment in response to exploitation of India’s mineral-rich heartland by private mining companies—companies essentially given blank checks by political parties at the cost of mass displacement, disenfranchisement and brutal repression of the indigenous Adivasi population.

Hiro’s foray into the oft-neglected Naxalite strongholds is evocative and important, given the lack of critical writing on the Naxalite insurgency. He seems largely sympathetic to the Naxalite cause, which feels warranted given the broad impact that pro-corporate policies and the privatization of natural resources have had on the Adivasi population. But his tendency to gloss over the diversity of leftist politics in India as well as the conditions that have led the Indian Left in to deep crisis leaves his narrative woefully incomplete.

When the Communist Party of India (Marxist-Leninist) formed in 1969, it subsequently splintered into numerous groups, which today form a vast continuum of left groups. Some of these groups have allied with far-right groups like the BJP in order to better jockey for political power; others, like the CPI (M) are seen as centrist, to have lost their revolutionary credentials because of a stubborn faith in electoral politics; yet others like the Naxalites, with a strong Adivasi and rural base in the peasant population, are perceived by many in the Indian Left to be blind to criticism.

The modus operandi of the Naxalite insurgents has had a powerful effect on fragmenting the Indian Left in recent years, largely due to an over-reliance on the use of shockingly violent insurgency tactics. Despite this, today due to brutal onslaughts by the army, paramilitary forces and local forces, the Naxalite insurgency is restricted mainly to the forests of eastern India. Meanwhile, CPI (M) governments in West Bengal and Kerala, quite apart from the mainstream Indian political parties, have their own history of violent reprisals against the Naxalite movement, while in no small way doing their own part to institute economic liberalization policies where in power, while being ostensibly “Communist.”

Though there is clearly a great deal of room for nuanced analysis in the history of the Indian Left, particularly in any discussion of armed insurrections of dispossessed rural and indigenous populations, Hiro does not seem to want to tackle the subject head-on. Instead, he saves the bulk of his invective for the powers that allow mining giants like Tata Steel and Jindal Steel to lay waste to huge segments of northeast India. But today, with the even more business-friendly Modi government setting the stage for a broader confrontation with the Naxalities by relaxing environmental and regulatory rules to allow unrestrained private activity, an honest reckoning of the history of CPI factions and the state of the Indian Left—one which Hiro is entirely capable of doing justice to—is vital.

The question of how to build popular support and connect the plethora of leftist and progressive groups is a pertinent one. In April 2014, the CPI (M) announced the formation of an 11-party front for the imminent elections. The deep divisions within left-wing splinter groups briefly seemed as if they might be overcome by the coalition, but the merger lasted a mere two weeks, mainly as a consequence of internal discord.

Progressive forces that can provide a bulwark against the far-right forces that have ravaged India over the last few decades with rapacious neoliberal policies, provide a remarkable counterpoint to the prevailing international narrative of India as a free-market success story. The Age of Aspirations is meticulously researched and exhaustively detailed, but it fails to draw together Hiro’s powerful narrative with an overarching analysis about the possibilities for social progress—a weakness most obvious when the story of the Naxalites comes in to focus.

Still, Hiro’s work provides a stunning indictment of the fashionable idea echoed endlessly by mainstream pundits of a politically and economically healthy, thriving, democratic India. The Modi government, led by a man involved in one of the worst state-sponsored sectarian massacres of the last few decades, brings to the fore right-wing bigotry, a pro-business mindset and a stunning insensitivity to the plight of India’s poor like perhaps none before. Particularly now, many a clarion call is required to remind Western observers that India has neither the wholesome democratic traditions nor the unblemished socioeconomic prospects it has long been touted to have. Fortunately, Hiro’s work serves as just that.

Kamil Ahsan is a doctoral student in developmental biology and a dual-degree student in history of science at the University of Chicago, as well as a freelance journalist. His work has appeared in the American Prospect, Dissent, Jacobin, Salon, the Rumpus and AlterNet.