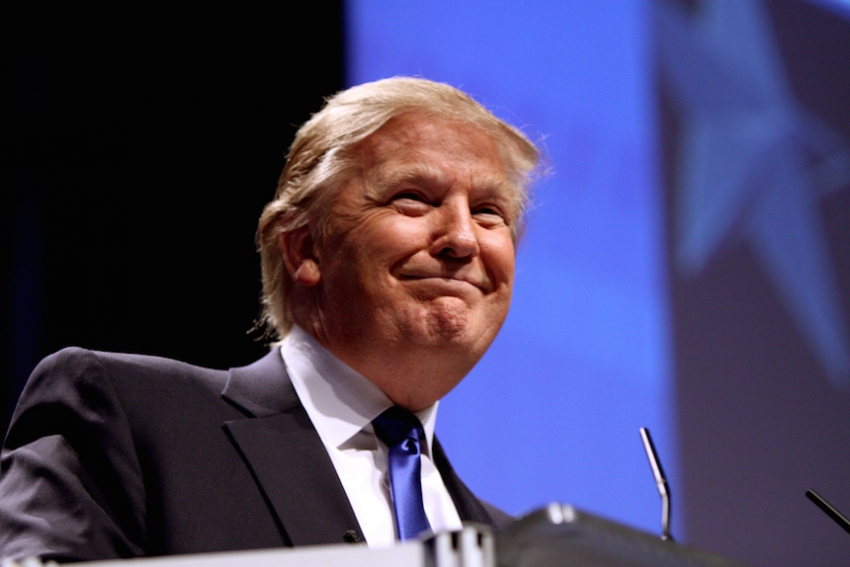 Donald Trump has centered a large portion of his campaign platform on his desire to build the magical wall. (CPAC 2011 / Flickr)

Why the GOP’s Mexico Fence Fantasy Is a Farce

Environmental damage? Exorbitant cost? Immigrants’ ability to find a way around it anyway? No matter! Build The Wall!

The GOP's "One Great Issue" of the 2016 campaign for president is: The Wall.

A long time ago, in a not-so-faraway land, a civilization existed that was governed through a fairly rational political system. Even conservative candidates for high office had to have a good idea or—and be quasi-qualified.

That land was the United States of America. It still exists as a place, but these days, Republican candidates don't even have to be qualified—much less sane—to run for the highest office in the land. All they need is the backing of one or more billionaires, a hot fear-button issue to exploit and a talent for pandering without shame to the most fanatical clique of know-nothings in their party. Also, they must be able to wall themselves off from reality, erecting a wall of political goop around their heads so thick that even facts and obvious truth cannot get through to them.

Indeed, the GOP's “One Great Issue” of the 2016 campaign for president is: The Wall. Ted Cruz practically snarls when he declares again and again that he'll “build a wall that works.” Marco Rubio is absolute about it: “We must secure our border, the physical border, with a wall, absolutely.” And Donnie Trump has basically built his campaign atop his fantasy of such an imperial edifice: “We're going to do a wall,” he commands, as though he's barking at one of his hotel construction crews.

There are, of course, certain problems that you might expect them to address, such as the exorbitant cost of the thing, the extensive environmental damage it'll do and the futility of thinking that people aren't clever enough to get around, over, under or through any wall. But don't hold your breath waiting for any common sense to intrude on their macho posturing.

Trump even made a TV ad depicting hordes of marauding Mexicans invading our country—proof that a huge wall is necessary! Only, the film footage he used is not of Mexican migrants, but of Moroccans fleeing into Spain. But after all, when trying to stir up fear of foreigners, what the hell does honesty have to do with it?

A proper wall, we're told, makes good neighbors. But an 18-foot high, 2,000-mile-long wall goes way beyond proper, and it both antagonizes your neighbor and screams out your own pitiful fear and weakness.

Besides, haven't we been trying this for years? With the Secure Fence Act of 2006, Congress mandated construction of a wall along the 1,954 miles of our border with Mexico. A decade later, guess how many miles have been completed? About 650. It turns out that erecting a monstrous wall is not so simple after all.

First, it becomes prohibitively expensive—about $10 billion just for the materials to build it from the tip of Texas westward to the Pacific, not counting labor costs and maintenance. Second, there's the prickly problem of land acquisition—to erect the scattered segments of the first 650 miles of fence, the federal government had to sue hundreds of property owners to take their land. Odd, isn't it, that right-wing politicos who loudly rail against overreaching Big Government now favor using government muscle to grab private property? Third, it's impossible to fence the whole border—hundreds of miles of it are in the Rio Grande's flood plain, and more miles are on the steep mountainous terrain of southern Arizona.

Trump, Cruz, Rubio and the other “just build a wall” simpletons either don't know what they're talking about or are deliberately trying to dupe voters. Before you buy a 2,000-mile wall from them, take a peek at the small part already built—because of the poor terrain and legal prohibitions, it's not one long fence, but a fragment here, and another there, with miles of gaps in between. Anyone wanting to cross into the United States can just go to one of the gaps and walk around the silly fence.