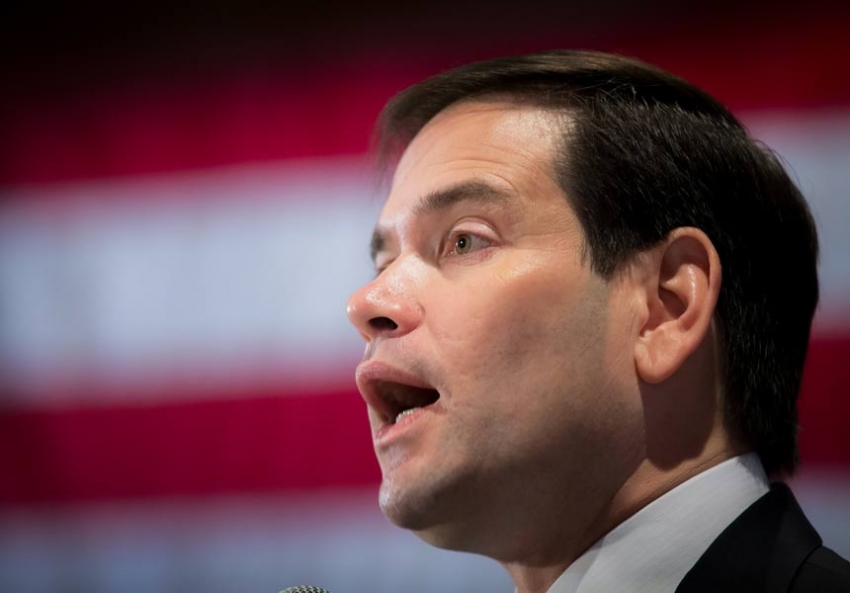 Marco Rubio wants to make sure his arms dealer campaign funders know he's got their back. (Scott Olson/Getty Images)

The Bizarre Experience of Agreeing with Trump

It’s no coincidence that Trump, the candidate least in need of money or media attention, is the most outspoken against war.

The last thing that the war industry wants is an honest discussion of the effects of our perpetual bombing campaign against targets in the Middle East and North Africa—a policy that has been profitable for contractors, costly for taxpayers and instrumental in producing failed states, floods of refugees and the terror threats it was supposed to eliminate.

In a rare moment of candor in the Dec. 15, 2015, Republican debate, Donald Trump acknowledged how our misguided policies since 9/11 have squandered trillions on wars that have made us less safe: “We’ve spent $4 trillion trying to topple various people. … The Middle East is totally destabilized. A total and complete mess.”

Trump’s ability to self-fund allows him to take on the military-industrial complex, at least rhetorically. Of course, rhetoric is not the same as policy. Trump’s association with groups like Frank Gaffney’s Center for Security Policy—funded by the likes of Boeing and promoting bogus conspiracies about Sharia law in America—suggests that a President Trump would follow the same failed corporate-friendly policies of Bush and Obama.

Nevertheless, it is worth noting that none of the corporate-funded candidates would dare risk taking on the military-industrial complex, even with empty rhetoric. The last thing that the war industry wants is an honest discussion of the effects of our perpetual bombing campaign against targets in the Middle East and North Africa—a policy that has been profitable for contractors, costly for taxpayers and instrumental in producing failed states, floods of refugees and the terror threats it was supposed to eliminate.

Compare Trump’s rhetoric to what you hear from a corporate-funded candidate like Sen. Marco Rubio (R-Fla.), backed by Northrop Grumman and Raytheon, who is running an advertisement that declares:

No serious person believes this tripe. It is pure corporate propaganda that seeks to justify a policy of more bases, more drones and more killing. And Rubio is not running his ad to appeal to voters. Rather, he is assuring his corporate donors that nothing will come out of his mouth that is not fully vetted by their think tanks.

Hillary Clinton, the Democratic frontrunner, has similarly avoided any honest discussion of foreign policy. That might upset her donors, like Lockheed Martin and Boeing. Instead, Clinton has been busy condemning Trump’s anti-Muslim rhetoric as “inconsistent with our values as a nation.”

“At a time when America should be doing everything we can to fight radical jihadists,” Clinton said in December 2015, “Mr. Trump is supplying them with new propaganda.”

Yet Clinton has been a whole-hearted supporter of Obama’s drone war, which slaughters Muslims in Yemen, Afghanistan, Pakistan and Somalia based on secret evidence, a policy at least as un-American as Trump’s shameful rhetoric. As far as “supplying them with new propaganda,” a video depicting 178 children killed by Obama’s drone strikes is readily available online. As U.N. Special Rapporteur on human rights and counterterrorism Ben Emmerson told CNN after a recent trip to Pakistan: “The consequence of drone strikes has been to radicalize an entirely new generation.”

At the most recent Democratic debate, Clinton voiced support for “the United States leading an air coalition [in Syria], which is what we're doing.” As of this Thanksgiving, the U.S. and its allies had already launched more than 7,000 air sorties against ISIS in Syria and Iraq. But we know very little about the people we are killing or what the blowback will be against the American people. While we know the precise numbers of civilians killed in Paris and San Bernardino, the U.S. military typically doesn’t bother counting the civilians killed from its own strikes. The clear message we send to the world is that Muslim lives don’t matter very much to the United States.

The other major candidate not in the pocket of corporations is Bernie Sanders. But, while he voted against the Iraq War and appears willing to take on Wall Street, in the Senate he has consistently approved appropriations to the war profiteers.

And if a candidate were willing to tell the truth about the war on terror, the corporate-controlled networks would do their best to censor and ignore them. As The Intercept reported, when CBS News ran a segment in mid-December featuring a focus group of American Muslims discussing causes of terror and radicalization, it edited out all of the criticisms of U.S. government policy toward Muslims. And as The Huffington Post has reported, the handful of journalists and politicians who were early skeptics of the Iraq War have been systematically shut out of the televised debate about how to combat ISIS and other threats.

Perhaps this explains why Bernie Sanders doesn’t want to take on the war machine. He is afraid the media blackout of his campaign would become a black hole.