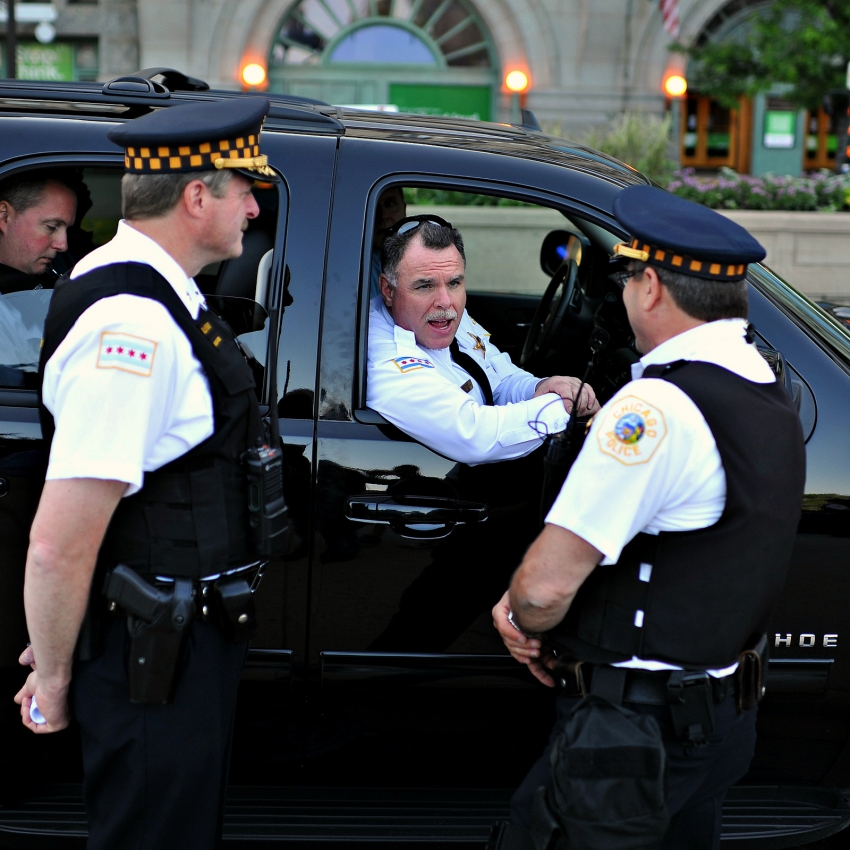 Where Are the Black Panthers and Corporate Philanthropists When We Need Them?

Real change requires that we expand our understanding of what actions are needed on the part of the mayor, the police and any one who claims the mantle of the city’s leadership. Two films that premiered this past fall provide guidance of the kind of leadership that today is missing.

Whether killed by cops or other youth, the people murdered in Chicago are victims of forces rarely named or addressed by pundits, politicians or protestors.

Chicago’s worst top cop in recent memory Garry McCarthy is gone. State’s Attorney Anita Alvarez is probably next to go, be it through resignation or more likely, and my hope, through election. Mayor Emanuel’s “fall” is grist for the mill for virtually every blog, twitter account and media outlet in the nation. And before most people woke up on New Year’s Day, two more Black men had been killed by gunfire—bringing the number of Chicagoans slaughtered in 2015 to 485.

No one needs a crystal ball to predict what will happen. Protests will continue—as they should—and many will demand not only change but Emanuel’s and Alvarez’s ouster. Editorials will continue to veer between condemning both cops and city officials for the police violence and excoriating officials, families, mothers, teachers and youth for the street violence that has given the city the moniker of Chiraq. All seek, understandably, to define the culprits and fix the blame.

Yet the explanations and demands made strike me as too facile, obscuring the root of the problems as well as potential solutions, and, frankly, letting too many people off the hook. For whether killed by cops or other youth, the people murdered in Chicago are victims of forces rarely named or addressed by pundits, politicians or protestors.

Both these trends fuel both the despair and anger that has erupted across the city.

Real change requires that we expand our understanding of what actions are needed not simply on the part of the mayor and the police but by any who wish for or claim the mantle of the city’s leadership. Two films that premiered this past fall provide guidance of the kind of leadership that today is missing.

Aviva Kempner’s Rosenwald and Stanley Nelson’s The Black Panthers: Vanguard of the Revolution vividly remind us of the equality that was hoped for and thought possible by determined African Americans and their well-intentioned white allies once slavery and—nearly 100 years later—formal segregation were abolished. The subjects of the two films are vastly different. Rosenwald is a story about the power of corporate philanthropy to change lives. The Black Panthers is the story of how community organizing could transform communities.

Kempner’s documentary tells the story of philanthropist Julius Rosenwald. The son of a Jewish-German immigrant who began life in America as a peddler and ended becoming one of America’s wealthiest men, building Sears, Roebuck and Co. into a billion-dollar behemoth. While wildly successful, unlike many of his contemporaries, Rosenwald did not credit his wits alone. Rather he believed that his success had much to do with the opportunity America had afforded his family and that it was his moral duty to ensure that others—particularly Black Americans—had access to the opportunity he had enjoyed.

Never having graduated high school himself and touched by writings and later the friendship of Booker T. Washington and W.E.B Dubois, Rosenwald believed that Black Americans would win the equality they sought and deserved if they had access to education. Believing that philanthropists should use their funds to establish exemplary programs that would encourage individuals and public agencies to invest in social change, beginning in the early 1900s Rosenwald invested more than $70 million of his wealth in schools, colleges, housing and businesses that opened opportunity for African-Americans. By the time of his death in 1932, Rosenwald had partnered with local communities to build more than 5,500 schools—all of which endured, and educated almost 1-out-of-3 Southern Black children, including Maya Anglou and John Lewis, until the Supreme Court ordered school desegregation in 1954—which led to the closure of most of those schools and thus the loss of a vital black community institution.

Nelson’s documentary provides a sorely needed examination of the equality agenda for which they fought. Reflective of the anti-colonialist struggles occurring around the world during the 1960s, the Panther’s Ten Point Program, drafted by Huey P. Newton and Bobby Seale, called for everything from full employment to quality and truthful education, from fair trials by juries of their peers to “land, bread, housing, education, justice and peace”. While much of Nelson’s film focuses on the government-induced rancor, imprisonment, exiles and deaths that ultimately led to the party’s demise, it also documents the Panther programs—child care, breakfast programs and schools that were a model of what black life could and should be like. At a time when Chicago was in thrall of the Gangster Disciples and the El Rukns, the Panthers stood out as an alternative path.

Today, with more young Black men (33 pecent) more likely to go to prison than to graduate college, with a higher unemployment among college-educated Black men (12 percent) than all college graduates (5 percent), and with nearly as many young men, mostly Black, (6,300 killed on the streets of Chicago between 2000 and 2015) than the combined number of soldiers killed in the war zones of Iraq and Afghanistan (6,700) during the same time period—both films prompt us to reflect on how the failure to fulfill the promise of equality lies behind those facts and why the equality fought for in the past today seems as—if not more—elusive than ever.

A couple years ago, I gave a talk to a group of 30 men, mostly young, all serving life sentences at Stateville prison.

As requested, I talked about my history, from my leap into the student and civil rights movements of the 1960s to my work for Harold Washington’s election in 1983 to my current involvement with the Obama administration and the issues of today. They talked about theirs.

They spoke of growing up in a world bereft of jobs, stores and mentors. As one young man put it, his world was “my threads, my wheels, my corner and my girl”—and it was in defense of this world that he killed.

Hearing their stories I asked if they knew that there had been a time when Black men picked up guns in defense of the Black community. I asked what they knew about Harold Washington, Martin Luther King, Huey Newton, James Farmer, John Lewis or Stokely Carmichael.

While all had heard of Martin Luther King, most knew no more about him than his name. A few had heard of the Panthers. Virtually no one had heard of SNCC or C.O.R.E. or the Mississippi Deacons for Defense. All of knew the Gangster Disciples, El Rukns and other legendary gangs.

All but one attended high school in Chicago; yet, none had learned about a past that was their collective history, let alone gained the skills required to create a future.

When pundits and politicians lay the blame for violence and question the “values” of those directly involved, the films made me reflect on other values that must be questioned. Why not question the values of a corporate culture that in sharp contrast to the tale of Rosenwald, encourages and compensates CEOs with multi-million dollar salaries while these same CEOS impoverish and abandon the workforce, cities and towns upon which their wealth was and leave the young and poor with few pathways to a sustainable future.

When Rosenwald’s Sears faced near bankruptcy after the First World War, he committed $21 million to save the company and the thousands of jobs it provided. Contrast that with an Irene Rosenfeld and her Mondelez Board that thought it right and moral to increase her annual salary to $22 million while removing 600 jobs from the Chicago West Side bakery that has produced Oreos for 100 years.

Why not also question the values that have produced an education system that fails to prepare Black youth for meaningful work and that neglects the very history that might inspire the young?

The past decade has been tough on Chicago. Of the city’s 77 communities, 24 have per capita income of less than $15,000 a year. In those communities, unemployment tops 20 percent, and amid shuttered plants and warehouses, the only work for the young are only dead-end, minimum-wage jobs.

Of course these are not problems unique to Chicago alone. They can be seen in Detroit, Cleveland, Newark, St. Louis and Memphis (and the list can go on and on). And they will continue unless we change course.

And we can. What has happened and will happen is not ordained. It is the product of the actions and decisions of humans.

Chicago is not blind to these realities and should be commended for what is being done right. Raising the minimum wage to $13 per hour by 2019 was a first step toward the notion that all work should be valued and rewarded with a life-sustaining income. Raising wages beyond the poverty level and mandating predictable scheduling and paid leave for the clerks, servers and health-care workers who in the future will account for most of the nation’s jobs would be useful next steps.

So would finally getting our education system right and investing in it. Reading and math are certainly important, but public education in the United States was established to ensure that citizens could engage in and benefit from our democracy, and that requires a knowledge of history and one’s place in it.

Our city, however, is not an island. Much depends on what we do as a nation.

It is time to rethink tax laws that make it more lucrative to dismantle or off-shore companies than to maintain and grow them here. And, when companies leave, perhaps they should be required to compensate the cities and workers that propelled their growth.

Without history our young have no context. Without connection to and possibility of respected, life-sustaining employment, they have no path to a future.

One hundred years have passed since Rosenwald built his first school; 50 years since the Panthers published their Ten Point Program and Martin Luther King attached his demands for equality on the door of Chicago’s City Hall.

We talk about, march for, and exhort our young people and our communities to stop the violence and in the face of police brutality and murder, to stay calm, focused and peaceful. But, as Pope Paul VI famously said during the turbulent 1960s, “If you want peace, you must fight for justice.” That fight for the justice that brings peace remains ours to fight and win.