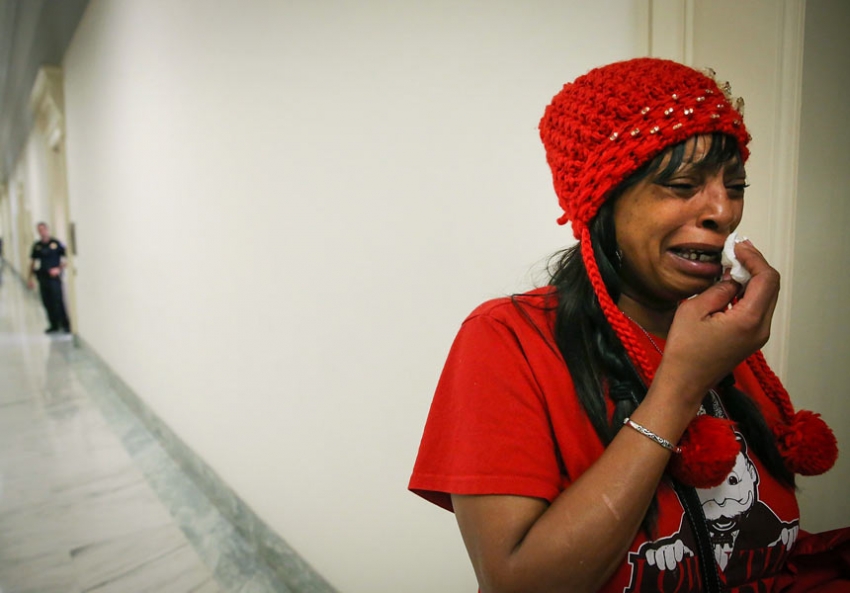 Flint resident Sharon Moore cries outside of a hearing on the city’s water crisis on Capitol Hill on February 3. (Mark Wilson/Getty Images)

Without Black Lives Matter, Would Flint’s Water Crisis Have Made Headlines?

Snyder pushed through his con­troversial emergency manager law in 2011, which allowed him to appoint officials to run—that is, take over—strug­gling cities and school districts and who could overrule local elected officials, dictate decisions about finances and public safety, terminate or modify contracts and sell off public assets. ... And where were the emergency managers ap­pointed? In largely African-American communities.

Why is Rick Snyder, Michigan's suddenly infamous governor, in the center of the media’s crosshairs? Massive coverage—front-page pieces in the New York Times, headlines in the nightly news, wall-to-wall coverage by Rachel Maddow—has linked the contamination of Flint’s water supply to the fact that its population is 57 percent African-American, and has either explicitly or implicitly cited the catastrophe as an act of “environmental racism.” That’s a term we haven’t heard much in the media, despite many other instances of environmental racism in the United States—one notorious example being the huge pollution-spewing garbage-burning incinerator in Chester, Pa., that sits right across the street from residential housing. Chester is predominantly poor and black.

So what’s different about Flint? The historical timing. The Black Lives Matter movement offers a news peg, having in­sisted that incidents of violence against black communities are not one-offs but part of systemic, structurally based brutality. Now there’s a media framework to legitimate Flint residents’ accusa­tions that the water crisis would never have happened in more affluent, white communities like Grand Rapids or Grosse Pointe.

The rise of Donald Trump also provides context here, however subtly. In his campaign, Trump has sought to make a virtue out of the fact that he has no political experience and instead would “get things done” because he’s a businessman and a “deal-maker.” In 2010, Rick Snyder campaigned on this platform as well. He was a wealthy venture capitalist and former tax accountant with zero political experience. Michigan was still reeling from the Great Recession, and Snyder claimed that his business back­ground made him the ideal person for the job. He said one of his guiding questions in developing policy would be “What’s financially affordable?” and championed “a streamlined regulatory system that’s more friendly to businesses.”

As part of this approach, Snyder pushed through his con­troversial emergency manager law in 2011, which allowed him to appoint officials to run—that is, take over—strug­gling cities and school districts and who could overrule local elected officials, dictate decisions about finances and public safety, terminate or modify contracts and sell off public assets. They did not need to have any particular expertise—in, say, education or public health—outside of cost cutting. And they were paid anywhere from $132,000 to $250,000 a year. Many Michigan residents denounced the law as undemocratic—it prompted two unsuccessful recall attempts—and in November of 2012, it was repealed by a popular referendum. Six weeks later, Snyder signed a slightly revised version of the bill that included a $770,000 appropriation for the managers’ salaries. Why did that matter? Because spending bills are legally shielded from referendums. And where were the emergency managers ap­pointed? In largely African-American communities.

In Detroit, teachers have staged sick-outs because of the fail­ure of the various emergency managers to deal with crum­bling school infrastructures, overcrowding and, yes, rats in the schools. Who was the emergency manager of Detroit Public Schools? Why, Darnell Earley, who ran Flint when it switched to the Flint River for its water. In February, he resigned in disgrace. In Flint, the revolving door of managers took authority away from the mayor and city council and pushed to change the city’s water supply from Detroit to the polluted Flint River to save money. We are now seeing how well that worked out. Emergency Manager Jerry Ambrose overruled the city council’s March 2015 vote to return to the Detroit water supply. And because of the autocratic power emergency managers enjoyed, they could ignore rising complaints about the color and smell of the water, and ignore or manipulate data about its safety.

There are many lessons the Flint catastrophe teaches, but one of the biggest is that governments do not work bet­ter if they are “run like a business.” It’s not just the ethical problem that slashing spending on things like public health is unjust and immoral. It’s also, in the end, more expensive. The switch to the Flint River for water was projected to save $15 million dollars. It may now cost $1.5 billion to clean up. So much for what’s “financially affordable.”