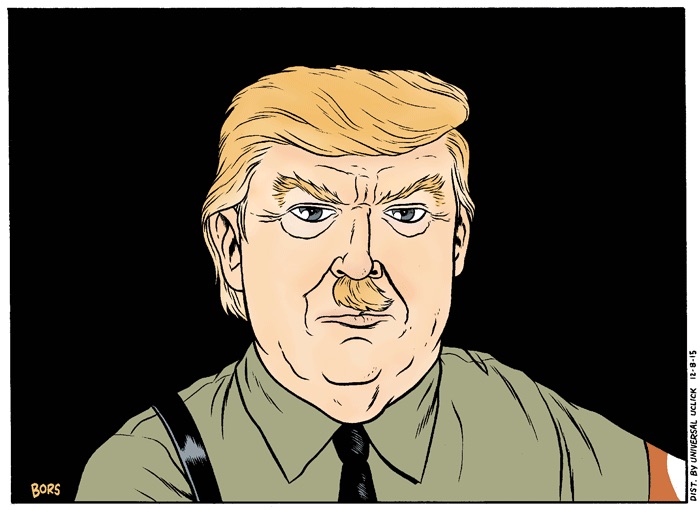 The Truth About Donald Trump’s Populism

There’s a reason the saying “anti-Semitism is the socialism of fools” made so much sense in Weimar Germany.

Why has Donald Trump been so successful? Matt Taibbi, in Rolling Stone, thinks he has the answer.

He writes, “Reporters have focused quite a lot on the crazy/race-baiting/nativist themes in Trump’s campaign.” Taibbi, though, will not be bamboozled: “These comprise a very small part of his usual presentation. His speeches increasingly are strikingly populist in their content.” Trump’s pitch, which Taibbi seems at least partially to accept: “He’s rich, he won’t owe anyone anything upon elec­tion, and therefore he won’t do what both Democratic and Republican politicians unfailingly do upon taking office, i.e. approve rotten/regressive policies that screw ordinary people.”

And though Taibbi insists this insight lifts him above the common scribbling herd, he’s hardly alone. Ryan Lizza, in the New Yorker, quoted conservative intellectual Henry Olsen to likewise suggest that Trump is thriving because he “is posing a new question: To what extent should the GOP be the advocates for those struggling in the modern economy?”

I attended the same Trump rally in Plymouth, N.H., as Taibbi. Matt should clean the wax from his ears: I heard the crazy and the race-baiting and the nativist themes raining down like dirty dollar bills at a strip joint.

But leave aside that Mexicans and Syrians are also “ordinary people” who struggle in the modern economy. And that you can’t trust anything Don­ald Trump says.

No, the core inanity here cuts much deeper. It’s an ignorance of a simple historical fact: Every fascist achieves and cements his power by pledging to rescue ordinary people from the depredations of economic elites. That’s how fas­cism works.

Read, for instance, this article from a Nazi-friendly web­site on “How Hitler Defied the Bankers”:

When Hitler came to power, Germany was hopelessly broke … Germany had no choice but to succumb to debt slavery under international (mainly Jewish) bankers until 1933, when the National Socialists came to power. Hitler began a national credit program by devising a plan of public works that included flood control, repair of public buildings and private residences, and construction of new roads, bridges, canals, and port facilities … Within two years, the unemployment problem had been solved. … Germany’s economic freedom was short-lived; but it left several monuments, including the famous Autobahn, the world’s first extensive superhighway…

And, for what it’s worth, it’s true! Hitler built the Au­tobahn! He conquered inflation! (It’s not hard, if you can shoot people who raise prices.) Unemployment plummeted!

You might even say that for “ordinary Germans” strug­gling in the modern economy, things got pretty good.

But guess what? Under fascism, economic protection for the goose accompanies dispossession of the gander. White people prosper in part because minorities suffer—whether, under Hitler, by taking away property from Jews, or as Herr Trump expects, by taking back “our” jobs from “them,” whether the them is immigrants or our supposedly duplici­tous trading partners.

There’s even a sociological term for it: herrenvolk repub­licanism. We’ve had it here, too, if in milder form.

George Wallace said to Wil­liam F. Buckley Jr. in 1968 that the state of Alabama “had five generations of people who didn’t go to school because there were no schools for black or white.” Then he became governor and—he claimed—turned Alabama into an educational paradise. Like all authoritarians, he lied: Education stayed plenty awful, especially for blacks in segre­gated schools.

And, like all authoritarians, the bedrock of his appeal was his hate. As one voter in Mas­sachusetts asked Wallace’s aide Tom Turnipseed in 1968, “When Wallace is elected president he’s going to round up all the niggers and shoot them, isn’t he?” Turnipseed assured him, “We’re not going to shoot anybody.” At which the voter responded, “Well, I don’t know whether I’m for him or not.” Which sounds a whole lot like what Trump fans told The Nation’s Sasha Abramsky. “I’d give ‘em a choice,” said one un-cherry-picked voter, concerning Muslims in America. “A trench on one side or a ticket out of here.”

Build infrastructure, jail banksters: Hell, I’m for all that, too. It shouldn’t take electing thugs to do it. There’s a reason the saying “anti-Semitism is the socialism of fools” made so much sense in Weimar Germany: Socialism and barbarism can look very similar in their surface appeals. The real fools are the media sophisticates who don’t bother to look a bare inch underneath.