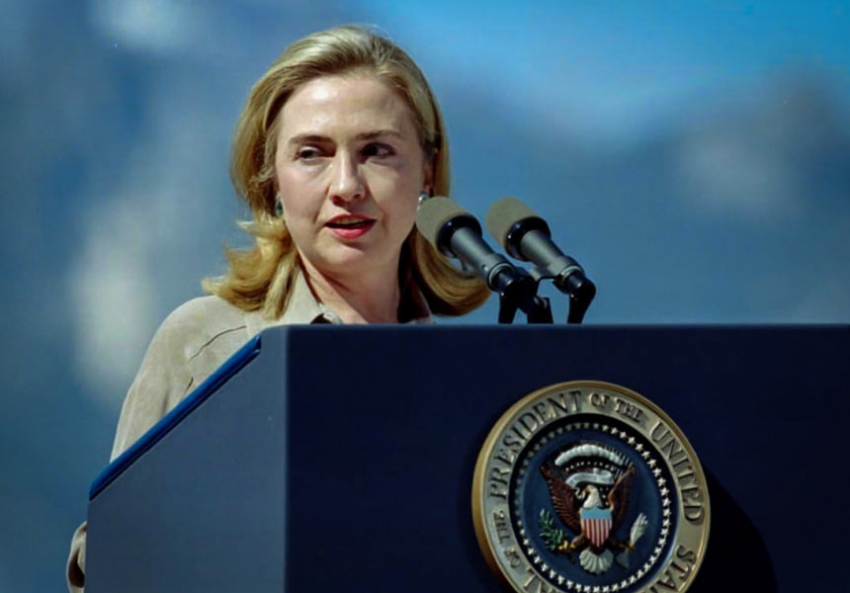 Clinton speaks at a ceremony on Aug. 26, 1995, marking the 75th anniversary of the 19th Amendment. (Luke Frazza/AFP/Getty Images)

A Progressive Case for Clinton

I am a progressive, I like Hillary Clinton and I do not feel remotely conflicted about that.

When I hear claims about Hillary Clinton, the money-grubbing shill for Wall Street who thinks just like a Republican, I don’t recognize the woman who once snapped at her husband for not fighting hard enough for universal healthcare, telling him, “You weren’t elected to do Wall Street economics.”

In In These Times' Hillary vs. Bernie roundtable last July—oh, what a faraway, innocent time July was—I was aware that I was making nice rather than making my case. My reticence was due to a fear that I voiced at the end of the conversation: that “Sanders vs. Clinton will become ugly, and we’re going to get to the finish line unable to get behind the nominee, and then I am going to wake up one day and Ted Cruz will be president.”

Now, the ugliness has arrived. So here comes my full-throated case for Hillary Clinton for president of the United States.

First, it is impossible to analyze Clinton—her policies, her career path, her hair—without understanding how gender bias operates. Bias plays a role in all of our reactions, no matter how feminist we are. As progressives, it is our duty to resist these stereotypes, and, if we are journalists, to help our readers understand how gender bias operates at an unconscious level.

When you hear that Hillary Clinton is unlikable, be aware of the study that shows competent women are generally seen as unlikable; when you hear that Hillary Clinton is dishonest, know that this same study shows women in power are generally seen as dishonest. And know that when the same imaginary job candidate is presented to two groups, with the only difference being a male or female name at the top of the résumé, the female candidate is seen as less trustworthy than the man. In each study, these biased reactions were found in both women and men.

And realize that when women seek power—for example, by running for the nation’s highest office—a Yale study reports that “participants experienced feelings of moral outrage (i.e. contempt, anger, and/or disgust) towards them” and that “women were just as likely as men to have negative reactions.” In the very same Yale study, when “participants saw male politicians as power-seeking, they also saw them as having greater agency (e.g. being more assertive, stronger and tougher) and greater competence.”

That is not to say that there cannot be specific, convincing arguments against Hillary Clinton, or that there are not arguments against her. It is to say that people who criticize Hillary Clinton, especially from the Left, should be aware of how these stereotypes may distort our perceptions, and how we can frame criticisms without feeding into the very real misogyny that has dogged Clinton throughout her career—an antipathy once expressed in a “Hillary Clinton dismemberment doll,” complete with detachable limbs.

Once one cuts through that misogyny, one is forced to confront the reason the GOP has fostered hatred against her: For much of the early portions of Clinton’s career, beginning when she arrived on the national stage in 1992, Hillary Clinton was presumed by the Right (and many Democrats) to be too far left to be in politics. She was Bill Clinton’s left-wing liability, a Saul Alinsky-hugging, Children’s-Defense-Fund-working, non-cookie-baking, mouthy feminist, attacked on the stage of the Republican National Convention for supporting “radical feminism” and “homosexual rights.”

It was in part because of this hatred that Hillary Clinton became the person we know today: a candidate defined by her caution and her frustrating self-contradictions, seemingly torn between challenging the power structure and gaining enough credibility within that power structure to survive. Clinton believes that you need to be in the system in order to change the system, and I think that is true. Clinton’s path has given her tremendous impact, and in many ways, her politics—left sympathies combined with a survivor’s instinct for using the system, and a lawyer’s love of the fine detail—are reminiscent of Obama’s. While leftists have critiques of Obama, too, I think he’s been the best president in my lifetime, which started with Reagan. I also remember that second Bush a little too well to ever believe that the two parties are “basically the same” (though I have been told this many times).

When I hear claims about Hillary Clinton, the money-grubbing shill for Wall Street who thinks just like a Republican, I don’t recognize the woman who once snapped at her husband for not fighting hard enough for universal healthcare, telling him, “You didn't get elected to do Wall Street economics.” Similarly, I see no shifty dishonesty in the Hillary Clinton who, in 2005, pushed for a 9/11-style commission to investigate the Bush administration’s failure to respond to Hurricane Katrina, and who today is the woman making the administrative negligence in Flint, Mich., central to her campaign.

Similarly, the Hillary Clinton who traveled to Beijing in 1995 against the wishes of her husband’s administration to declare that “women’s rights are human rights” is entirely recognizable as the Secretary of State who helped to create the Office of Global Women’s Issues and declared that “the United States must be an unequivocal and unwavering voice in support of women’s rights in every country on every continent.” In short, this is the same Hillary Clinton who is today stressing equal pay for women as a racial justice issue, given that the women who are most penalized by the pay gap are black women and Latinas.

And the Hillary Clinton who is “Republican lite,” “more like Reagan than FDR” and “to the right of Nixon” does not seem remotely the same Clinton whose votes aligned with Sen. Bernie Sanders’ 93 percent of the time during the two years they overlapped in the Senate. They famously parted ways on the 2002 decision to authorize the war in Iraq—a vote that Clinton acknowledges was a mistake. That doesn’t undo the war, or make her right in retrospect, and it doesn’t even defuse the idea that she voted for the war specifically to protect her reputation; many Democratic politicians with presidential aspirations, from John Kerry to Joe Biden, made that same vote. I respect that for a serious and thoughtful person, the Iraq vote might rule Clinton out; it ruled her out for me in 2008. But this is not 2008, and this year, her opponent’s lack of interest or expertise in foreign policy worries me more than her record. We got into Iraq—a quagmire that has lasted, literally, for my entire adult life—not only because of U.S. interventionism, but because the commander in chief didn’t understand the region well enough to know how profoundly we would destabilize it, or how that would trap us in a conflict that would last for generations. I may not always agree with Clinton, but at least I believe she knows her stuff.

So, yes. There are problems with her record, and I recognize them. I could also criticize Sanders. I could go on about, for instance, his tendency to bring every single question back to economic inequality (an outdated, single-axis analysis that, as Andrea Plaid noted in these pages, is as myopic as #whitefeminists trying to make everything “all about gender”). But I won’t. I want to talk about the woman who has survived 25 years of misogynist hatred and GOP attacks, and came out unbroken and unbowed.

I want to talk about the woman who, knowing full well how bad it gets, signed up for anywhere between a few months to another decade of hideous treatment. It doesn’t hurt that she was the first candidate to advocate overturning the Hyde Amendment on the campaign trail, or that she has been vocal and insistent on equal pay and reproductive rights, or that she has responded to pressure for her campaign to demonstrate a serious commitment to racial justice by reaching out to women affected by police brutality and giving lengthy public statements about the need for white people to recognize their own privilege and take part in resisting and ending racism.

I do not believe she would do all this if she simply wanted personal power. We’ve seen what a candidate who wants personal power looks like: Donald Trump. If you are a narcissist, ways exist to make people like you; a lifelong career as a highly visible feminist is, trust me, not one of them. Working for a legal fund that provides free defense to the poor, or going undercover as a civil rights operative to uncover racial discrimination in schools, are not things the power-hungry do, but Secretary Clinton has done them.

I am a progressive. I like Hillary Clinton and I do not feel remotely conflicted. The qualities she’s exhibited over her long career—practicality, resilience, the ability to use the system to improve the lives of the least powerful within it, the ability, above all, to survive—are not just admirable. They’re exactly what progressives need if we are to carry the White House.