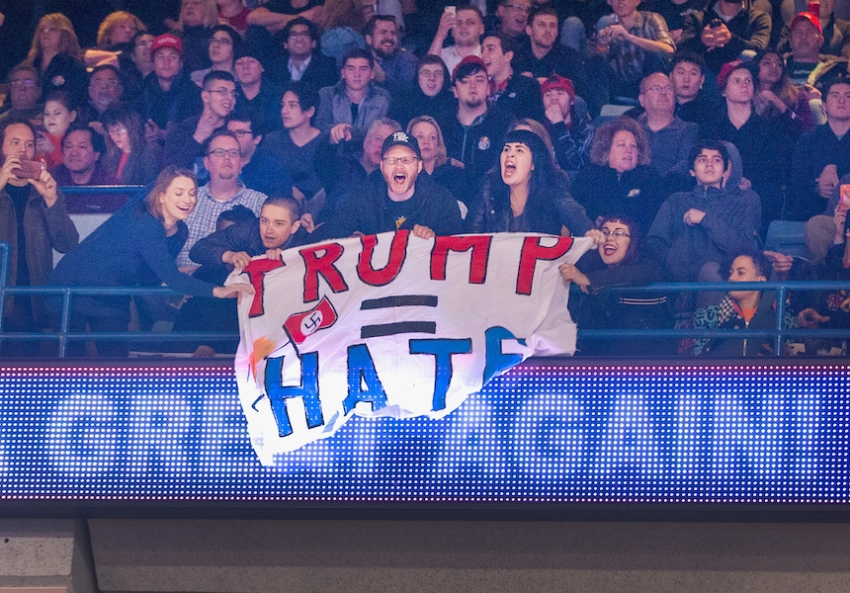 Anti-Trump protesters should focus their efforts on countering his messages, not preventing him from speaking..

Progressives should try to use such an event to communicate a counter-message to the large audience available, stretching far beyond Trump fans.

Was the protest inside and outside a planned, then disbanded, Donald Trump rally in Chicago just a few days before the March 15 Illinois primary a great success for progressives?

Marilyn Katz, a longtime organizer on the left and a public relations and strategic consultant, thinks that it was, writing for In These Times that “Chicago has given us a glimpse of how…to change the course of this election” through a “political revolution—of the people, by the people and for the people.”

I was happy to see large crowds of people protesting Donald Trump’s message and candidacy and cheered the organizing efforts of varied citizen groups. Although working as a journalist interviewing participants, I joined in spirit with the protest. But I came away with caveats about how many people on the left envision these protests advancing progressive goals.

Many Trump opponents, from petition signers trying to deny Trump use of the venue to protesters at the rally, wanted to stop Trump from speaking. That’s always a tempting when someone is saying things as stupid and insulting as Trump does on a regular basis.

But it’s the wrong response. Progressives should try to use such an event to communicate a counter-message to the large audience available, stretching far beyond Trump fans. That message is, first of all, that Trump—as a leader and through implementation of his ideas—would be bad for you and bad for the country. Second, there are better choices for leaders and better ways of identifying the real problems of the country and their solutions (taxing rich people like Trump more and more humanely adopt a steady flow of immigrants, just to start).

This political counter-message is being delivered during an important election. For those who see Trump as embodying the threat of fascism, or perhaps just being a bad man with bad ideas, the best way of blocking him is to defeat him in the election process. Other Republicans are not likely to do so short of a tumultuous convention battle. Street protests will not stop Trump, though some could be part of an effective multi-front attack. But just talking to people in their homes and communities would probably accomplish more.

Any greatly disruptive protests at the Cleveland Republican Convention would only feed into Trump’s plans. It is worth remembering the protests at the 1968 Democratic convention in Chicago (where both Katz and I were participants) ended up losing popular support for both the Democratic party and for the protesters. It was a turning point in the eventual unraveling of the New Left.

A repeat of Chicago 1968 outside the Cleveland Republican convention could simply reinforce Trump’s image as the strong man needed to control chaos at home and abroad.

Ultimately, Trump will win or lose through elections. (No putsch seems in the wings.) When people act in the streets they must conceive those actions in terms of how that will hurt him at the polls.

It is important that the message of anti-Trump protesters not be seen as denying freedom of speech, even to someone who can buy his way to greater freedom to speak than most people. I am happy to see a boisterous crowd challenge Trump, even disrupt his speech, even resort to self-defense if attacked by pro-Trump thugs that the little would-be dictator incites.

But the main goal of the protesters should not be to silence him, but to exercise political jiu-jitsu that takes advantage of his notoriety to communicate the progressive counter-message, a message that includes the strong support of free speech, equality, democracy and other values of both the left and of American culture as a whole. The left should not embrace an approach that could be seen as mimicking in any way Trump’s hostility to free speech and incitement to violence or suppression of opponents.

But that’s different from trying to “still the voice and vitriol of Donald Trump,” as Katz said the Chicago protest succeeded in doing. Similarly, Kelly Hayes, an organizer, direct action trainer and writer in Chicago, wrote in Truthout that people should (and this was the headline, which she may not have written) “stop whining about Trump’s right to ‘free speech.’”

I’m not so worried (and I’m not even whining) about Trump’s right to speak as much as I am concerned that the left, or progressives, in this country continually stand up on behalf of free speech, even of our enemies, as a part of what we advocate for a good society. It is a vital part of our traditions, exemplified in the free speech fights of the Wobblies and Emma Goldman, among many others (and the editorial policy of In These Times throughout its existence).  Also, it is important to protect free speech, free assembly (including protests) and other democratic rights for the sake of both a strong progressive political movement and the kind of society that it hopes to create, even when it is uncomfortable.

In the recent Chicago case, Trump did not succeed in blaming the protesters for the clashes that erupted. Not only reporters but also his Republican opponents nailed him as responsible for the scuffling that broke out by using provocative language and encouraging violence by his supporters against protesters. But if most of his party backs him in general elections, he may be able to twist the story against protesters.

That should not stop protests. But it should remind those in the streets, first, that their arguments are part of an argument, a communication with Americans (voters especially) that conveys our deeply held values (including freedom of speech). Second, the protests can take many forms and be more effective, for example, with humor—employed by many in the Chicago protests—in addition to confrontation. Third, they should remember that their own speech, in the streets or elsewhere, is part of the democratic electoral contest for power as well.

Whatever the limitations of elections, they remain one of the most critical levers for change we have, and we should use our speech and actions to make those elections more democratic and powerful, even as we communicate our views to fellow citizens in the most effective way possible.