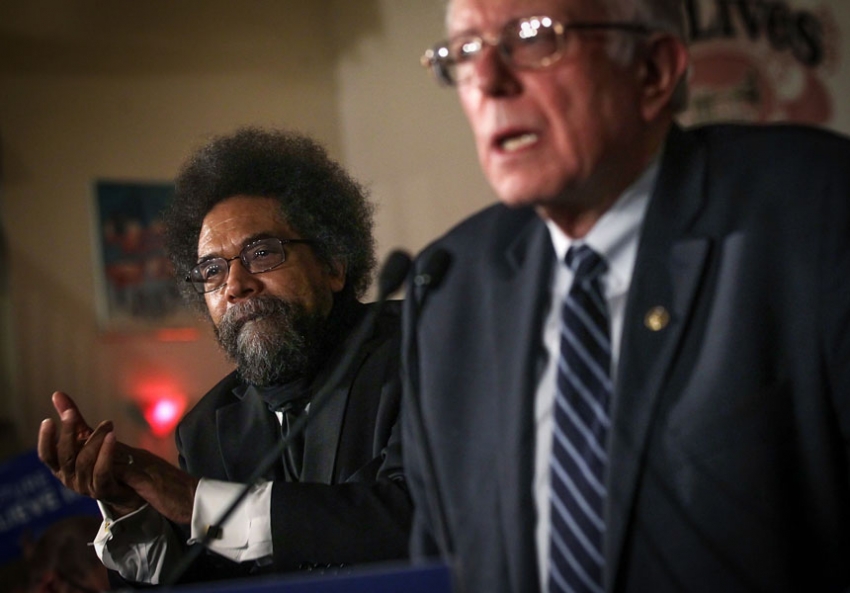 Cornel West's enthusiasm hasn't been enough to get the black community excited for Sanders. (Photo by Alex Wong/Getty Images)

The Paradox of Bernie Sanders and the Black Voter

Despite Sanders’ historic election, we still don’t seem any closer to resolving the rancorous intra-left debates about race and class.

Many are perplexed by what they see as black Americans’ perverse allegiance to Clinton.

One of the most striking developments of this election season is the inability of Vermont Sen. Bernie Sanders to attract black voters to a campaign that speaks more directly to their needs than that of any major party candidate in recent memory—if ever. Even Jesse Jackson’s pioneering campaigns failed to challenge the economic foundations of white supremacy like Sanders does.

Given this, some argue that a vote against Sanders is an abandonment of the black community’s best interests. Among them is scholar-activist Cornel West, who attributes the black electorate’s preference for Hillary Clinton to “an addiction to the familiar”—and the black leadership’s support of Clinton to “moral cowardice.”

Despite West’s tendency toward hyperbole, the Sanders campaign enlisted him as a liaison to the black electorate. But his high-charged criticism of President Obama (he has called him a “pimp” and a “black mascot of Wall Street oligarchs and a black puppet of corporate plutocrats”) have won him few fans with folks still smitten with the first black president.

In the South, the Sanders campaign needed a surrogate with a “gospel accent,” so to speak. Utilizing West for this purpose reveals Sanders’ campaign as either tone-deaf to cultural nuances in the black community or so desperate for high-profile black support that it doesn’t care.

Other black Sanders surrogates, like activist-actor Danny Glover, rapper Killer Mike and the iconic Harry Belafonte, were enlisted to bolster his racial bonafides but instead give the campaign a bookish, boutique character.

Certainly they failed to pierce Hillary Clinton’s firewall of Southern black support. The former secretary of state carried margins of 7 to 1 or more among black voters. That support is likely a function of her history as a first lady in the state of Arkansas, hazy nostalgia for the boom days of the Clinton ‘90s and her fulsome embrace of the beloved Obama. The possibility of electing the first female president is also a probable factor: Women comprise 66 percent of the black electorate.

Sanders does only a bit better with black voters in northern states, winning roughly 30 percent in Michigan, Ohio, Missouri and Wisconsin. But the gap remains significant.

Many are perplexed by what they consider black Americans’ perverse allegiance to Clinton. Michelle Alexander, author of the highly influential The New Jim Crow, for example, argued in a widely discussed Nation essay that Clinton is undeserving of black support. Alexander notes that the Clintons “presided over the largest increase in federal and state prison inmates of any president in American history.”

Others are not so perplexed. Glen Ford, executive editor of Black Agenda Report, argues that black people “tune Sanders out, because their main purpose for voting in national elections is to keep the White Man’s Party, the Republicans, out of the White House, and believe Clinton has a better shot.”

I think Ford is on target, and although he bemoans this tendency, it’s one that’s been honed by centuries of hard-earned experience. New York Times columnist Charles Blow calls it “functional pragmatism.” In the push-pull relationship between Bernie and the black community, that’s some of the push.

The significance of these ideological nuances made a brief appearance during a debate in Flint, Michigan, when Sanders’ response to a question about his “racial blind spots” implied that only black people live in “ghettos” and that most black people were poor.

It was a minor verbal gaffe that was likely the product of debate exhaustion. But it was a gaffe that might also be characterized as a “Marxian slip,” in that a bit of Bernie’s worldview slipped out. Specifically, his conflation of black America with the lumpenproletariat, a Marxist-Leninist conceit widely held during the days of the Black Panther Party, the time of Sanders’ ideological formation, but one that can elide the specificities of racial oppression and the subtleties of class divisions in the black community.

It was indeed a slip for Sanders. He’s been trying hard to update his rhetoric to be more attentive to issues of white supremacy. He effectively incorporated an early encounter with Black Lives Matter protesters into a more inclusive campaign platform.

But his gaffe also played into an ongoing squabble among progressives about the role of race in the class struggle (or the role of class in the racial struggle). That disagreement has been debated rancorously for the better part of a century now. And despite the historic campaign Bernie Sanders has run in this election, we still don’t seem any closer to resolving it.