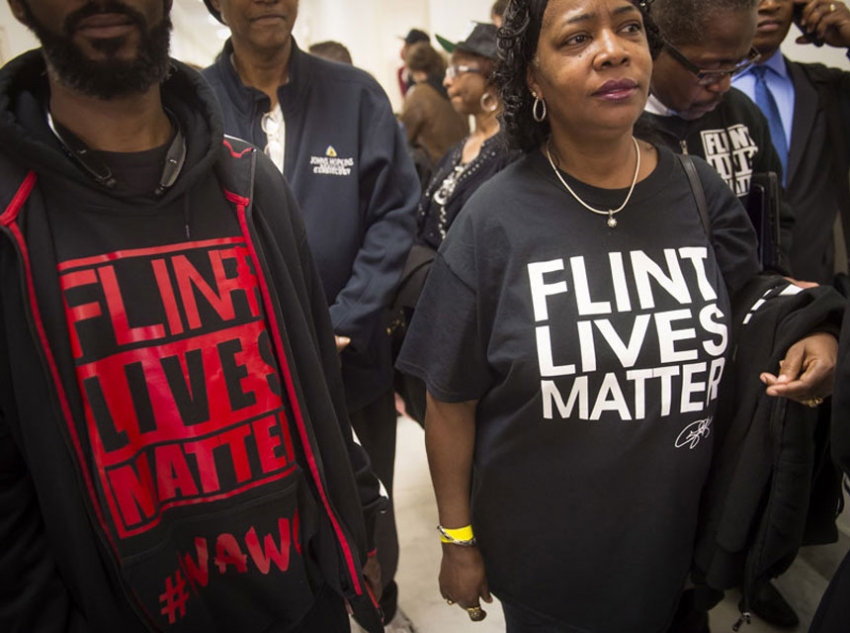 The Real Heroes of the Flint Water Crisis

Flint residents refuse to be silenced

'We’re a shining example of what happens when regular citizens have had enough.'

In late March, a state-convened task force issued a blunt conclusion: The water contamination crisis in Flint, Mich., was the result of environmental racism.

The Flint Water Task Force, a group of scientists and technical experts appointed by Gov. Rick Snyder (R) in October 2015, wrote in its final report that the majority-Black city “did not enjoy the same degree of protection from environmental and health hazards as that provided to other communities.” Among those to blame for dangerously high lead levels in the city’s water, according to the task force, were the governor’s office, the state environmental agency and emergency managers appointed by Snyder, who oversaw a decision to start drawing the city’s drinking water from the untreated Flint River.

But one group of actors got it right, the task force wrote: the “engaged Flint citizens … who had the expertise and willingness to question and challenge government leadership.”

The story of Flint’s toxic drinking water has captured national attention. But the media narrative has focused on a few villains—Snyder, the state Environmental Protection Agency (EPA)—and a handful of heroes—the physicians and researchers who spoke out about dangerous levels of lead in the blood of Flint children and the investigative journalists who broke the story.

What’s been less-reported is the key role Flint residents played in exposing their city’s water crisis and containing its deadly effects. Nor is their fight over; organizers in Flint are still struggling to get justice and healthcare for those affected and to reclaim the democratic control that might have prevented the disaster.

“We’re a shining example of what happens when regular citizens have had enough,” says 37-year-old Flint resident Melissa Mays.

After the city switched its water supply in April 2014, Mays, her husband and her three sons began suffering from unexplained rashes, hair loss and muscle pain. Other Flint residents had similar problems, and it wasn’t hard to guess the root cause. Since the switch, the water coming out of the taps was discolored, tasted bad and smelled foul.

After months of inquiries from residents, the city sent out a notice in January 2015 that Flint was in violation of the federal Safe Water Drinking Act due to elevated levels of the chlorine byproduct TTHM in the water. TTHM is linked to cancer and to liver, kidney and central nervous system disorders. But city officials insisted the water remained safe.

Mays was unconvinced. After receiving the notice, she co-launched the group Water You Fighting For with a water-safety website where residents could share information.

Meanwhile, Flint residents faced another problem. Even as lead-tainted water flowed through their taps, they were paying among the highest water rates in the country. The decision to hike rates was also made by one of Snyder's emergency managers, the first of whom was appointed in 2011. Snyder removed public oversight, giving his appointee the power to override elected officials to cut costs. Flint would have four emergency managers in as many years. The Flint Democracy Defense League formed to oppose this state of affairs and later launched a water task force to combat the dual problems of plummeting water quality and skyrocketing water rates. The group began distributing bottled water to those whose taps had been shut off for nonpayment and demanded a city investigation of the issue.

As officials dragged their feet, organizers decided to try another tack. In spring 2015, Water You Fighting For and the Democracy Defense League joined forces with several other groups to form the Coalition for Clean Water. They partnered with Virginia Tech engineering professor Marc Edwards to conduct their own water-quality tests. In August 2015, volunteers distributed 300 test kits and received 277 back. The results showed dangerous levels of lead. After further public pressure, Flint reconnected to Detroit’s water system in October.

But the damage had been done. The effects of lead poisoning—including memory loss, high blood pressure and joint and muscle pain—are permanent. As many as 12,000 children drank lead-contaminated water and are at especially high risk for brain damage.

In addition to distributing bottled water and tending to residents’ immediate needs, Flint organizers are continuing to advocate for ongoing health care and the abrogation of residents’ water debts. Mays says her unpaid water bill totals more than $1,800, even while her family deals with ongoing health problems. Snyder has agreed to partially reimburse residents for contaminated water in the form of a 65 percent “credit” on future bills for those current on their payments. “We don’t need to be paying for this poison water,” says Democracy Defense League organizer Nayyirah Shariff. “We need more than water. We need justice and we need reparations.”

Many Flint organizers still see the system of emergency management as the fundamental problem. Snyder has said that he will continue the emergency manager system through the end of his term in 2018. The Flint Water Task Force called for reforms such as a citizen appeal process and an ombudsman. But that won’t be enough to satisfy Flint’s citizen-activists, who are calling for the elimination of emergency managers. On March 27, Flint resident Quincy Murphy and local pastor David Bullock launched an effort to recall the governor. If they can gather 790,000 signatures within 60 days, voters may have the option to show Snyder the door next year.

“This story is not over,” says Claire McClinton of the Flint Democracy Defense League. “They poisoned the wrong city.”