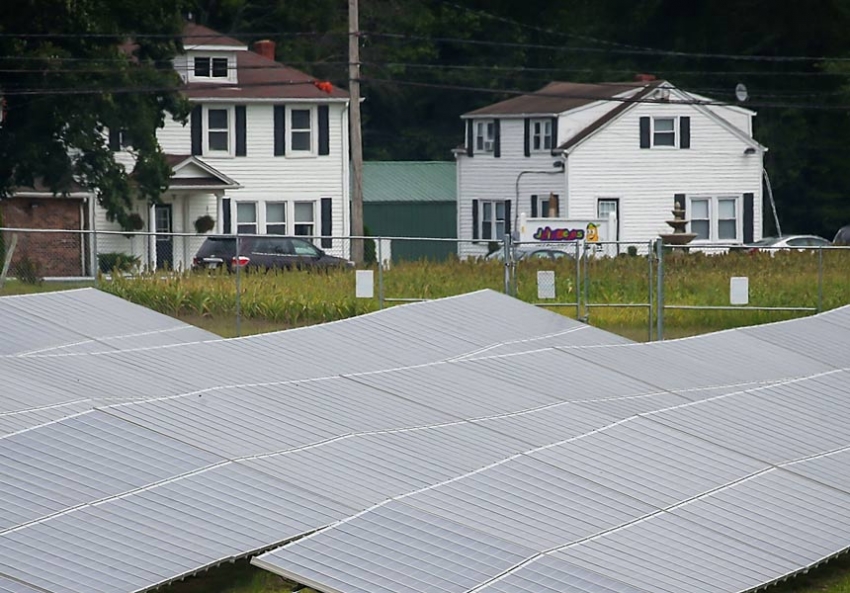 Why We Must Make Green Energy a Public Good

Without robust public-sector solutions, the move away from fossil fuels could leave many behind. But done right, a clean energy economy would also usher in a more equitable one.

By Al Gore’s telling, the private sector is our best hope for averting climate change. In a widely viewed February TED Talk, the former vice president presented “the case for optimism on climate change”—a stark reversal from the doom-and-gloom projections about impending catastrophe for which he is known. Fossil fuels still account for 82 percent of U.S. energy consumption. But Gore is now sanguine, in large part, because the private sector is flocking to invest in renewable energy, what he calls “the biggest new business opportunity in the history of the world.”

His argument goes like this: Thanks to a rapid drop in the cost of wind and solar-energy production, a full-blown transition to renewable energy has never looked more feasible. Grid parity—the point at which renewables become cost-competitive with conventional fuels—is nigh. Eventually, with enough private investment, renewable energy will simply render fossil fuels obsolete, driving down emissions in the process.

Can the invisible hand really guide us to a low-carbon future?

Debbie Dooley thinks so. The 57-year-old founder of the national Green Tea Coalition is one of a growing number of right-wing activists entering the fight for what she calls “energy freedom.” This blend of conservatism and environmentalism is an animating force in nationwide efforts to expand the use of home solar panels.

Residential solar has a natural appeal for the Green Tea crowd. Many states limit residents’ choice of electricity providers to a few large utility companies, to the great frustration of many. Home and business owners who opt to install panels on their roofs essentially become private power-producers. Dooley believes they should be free to sell directly to neighbors, breaking up government protected monopolies.

“Capitalism and the free market are a natural fit for solar,” Dooley tells In These Times. “The government needs to get out of the way.”

Dooley’s not wrong to suggest that restrictive regulations may be stymieing the growth of the nascent industry. While solar has experienced rapid growth, it still accounts for less than 1 percent of power in the U.S. Since 2013, dozens of states have enacted fee hikes and surcharges for users of rooftop solar energy, as well as bans on net metering, a policy that helps homeowners offset the cost of solar-panel installation by letting them sell surplus electricity back to utilities at retail prices.

But regulators have often embraced these policies at the behest of another set of private actors. Gas, oil and utility companies all see the home-solar boom as an existential threat to their market and have thrown their lobbying weight behind anti-solar measures. In 2013, the Guardian revealed a concerted plan by the American Legislative Exchange Council—whose members at the time included Shell, BP, Chevron and ExxonMobil—to tarnish renewables’ image and pass nationwide restrictions on them.

Dooley’s solution is “solar choice,” a suite of policies that includes net metering and exemption from certain taxes. Joining her are fellow conservatives, faith groups and organizations like the Alliance for Solar Choice, backed by some of the country’s biggest solar companies. Environmental organizations such as the Sierra Club have also enthusiastically signed on.

Last year, this unlikely alliance successfully passed the Solar Power FreeMarket Financing Act in Georgia, which allows homeowners and businesses with on-site solar to buy from and sell to third-party providers. Dooley and her allies are hoping to push through similar measures in Florida, New Hampshire, Nevada and elsewhere.

Dooley is a skilled coalition-builder. She talks environmental stewardship with greens, and market choice and national security with fellow Republicans. (“We don’t know that ISIS is not in this country trying to hack into our infrastructure.”) She doesn’t deny the existence of climate change, but she avoids bringing it up. And while she supports state-funded renewables research and development, she argues against regulations on emissions, a carbon tax or any long-term energy subsidies.

Progressives have thus far latched on to an easy point of agreement with the Green Tea Coalition: Level the playing field and renewable energy will win the day. It’s a tempting argument, and the motley group going up against ossified utilities and their corporate allies is easy to root for.

But the private-sector solutions envisioned by conservative environmentalists leave much to be desired. If left to the free market, clean energy is likely to remain out of reach for many Americans. According to the National Renewable Energy Laboratory, 49 percent of U.S. households can’t access residential solar—either because they don’t own their own homes, or live in buildings that can’t host rooftop panels. Even for those that can, the upfront costs of rooftop solar installation are high—between $15,000 and $29,000 for a typical system.

Green power to the people

Without robust public-sector solutions, the move away from fossil fuels could leave many behind. But done right, a clean-energy economy could also usher in a more equitable one, as Naomi Klein argues in her 2014 book This Changes Everything: Capitalism vs. the Climate. Germany holds lessons for U.S. organizers in this respect. The country’s social movements have for years demanded favorable market incentives, federal funding and ambitious climate goals. In 2015, Germany sourced more than 32 percent of its power from solar, wind, biomass and other renewables. Today, roughly half of the country’s renewables capacity is community-owned, breaking up the power of the country’s big utilities.

In the U.S., rural electric cooperatives (RECs) present a promising opportunity. These member-owned energy cooperatives were created through the New Deal to bring power to areas that weren’t served by private companies, including 90 percent of rural homes. Today, more than 900 RECs serve 42 million people—12 percent of the country’s population—in some of the poorest areas of the U.S.

At present, RECs get about 70 percent of their power from coal, and have grown largely unaccountable to their membership. But activists believe that if these publicly subsidized electric cooperatives were to embrace renewables, they could become crucial vehicles in the fight for a low-carbon future.

Last year, several electric cooperatives in North Carolina launched solar projects with the help of public funding. Taking advantage of an energy efficiency loan program administered by the USDA, the Roanoke Electric Cooperative now offers its 14,000 member-owners access to community solar, which is installed and maintained by the cooperative and affords sizeable savings on their monthly bills.

Scaling up this model will require expanding federal funding for renewables and making it easier for RECs to annul long-term contracts with oil and gas companies, says John Zippert, director of program operations at the Albama-based Federation of Southern Cooperatives’ Rural Training and Research Center. It will also take grassroots mobilization: One of his group’s most recent ventures is an effort to reform the Black Warrior Electric Membership Corporation, a REC serving 26,000 members in Alabama, most of them African-American. Zippert explains that they hope to both re-democratize Black Warrior—the current leadership is appointed and predominantly white—and transition it over to renewables, creating a model for reform efforts around the country. RECs’ broad reach could help scale up the use of wind and solar power dramatically. Meanwhile, communities deeply impacted by racism and inequality would get the chance to share in the boon of the clean-energy economy.

To date, progressive green groups in the United States have been better at articulating what they don’t want—the Keystone XL pipeline, for instance— than what they do. That leaves an opening for the new breed of conservative green activists to offer an alternative vision of a decentralized market where customers “enjoy the freedom that comes from being able to generate your own power,” as Dooley puts it.

With climate legislation all but impossible at the federal level, private sector solutions carry an undeniable charm, and removing the barriers to their development will be an inevitable part of our energy transition. But as the fault lines in the climate fight begin to shift, progressive environmentalists must put forward an ambitious program—one that sees clean, reliable power as a public good.