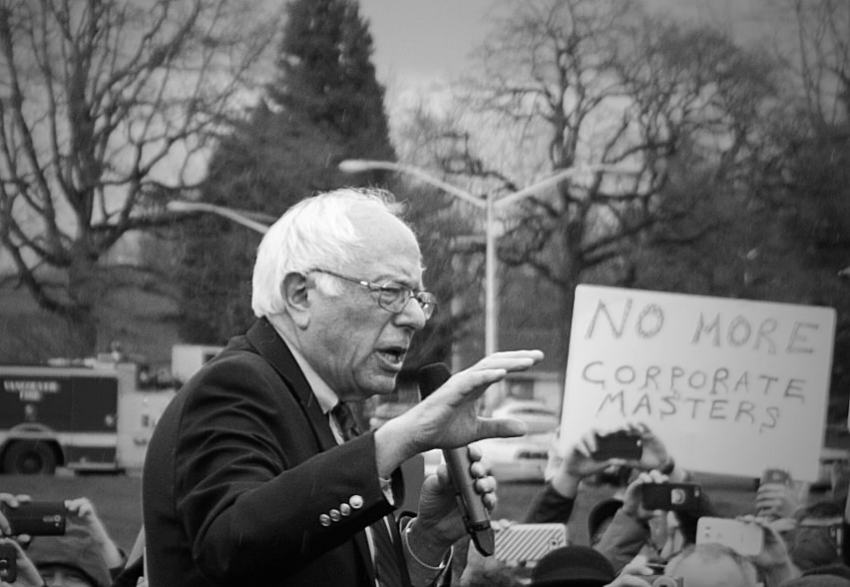 After His New York Loss, Bernie Sanders Should Focus on Democratizing the Democratic Party

A convention fight this summer in Philadelphia offers Sanders the opportunity to make significant reforms to the Democratic Party.

Today, after his 16-point loss in New York, it is extremely difficult for Bernie Sanders to secure the Democratic nomination for President. Then again, it was extremely difficult before yesterday and has been every day since he announced his intention to run nearly a year ago.

Sanders’ campaign has always been a long shot: he started out with virtually no national profile, insubstantial support among Democratic officeholders and power-players, and a hostile news media intent on ignoring him as long as possible and ridiculing him thereafter. In the face of such long odds, the campaign has accomplished remarkable things: breaking fundraising records, producing some of the greatest campaign ads ever and coalescing political will around frames and ideas that will be essential for the ascendant left in coming years.

His path to the convention is clear. Sanders should continue fighting to mobilize every last voter and delegate behind his agenda of guaranteed universal rights to healthcare, education, and dignified conditions—and continue impressing the necessity for ongoing mass agitation (what he calls the “political revolution”) to accomplish the same. That way, when he gets to Philadelphia in July, even if he hasn't managed to catch up to Clinton, he will possess maximal leverage to affect the convention.

One field he may want to influence is the Democratic Party platform. It would advance some of his planks to feature them as official party doctrine—postal banking, social security expansion, and automatic voter registration are among the attractive candidates. That victory, however, would be largely symbolic. Sanders should set his eyes higher: party structure. The best use of his delegate clout will be to democratize the DNC, the better to pave the way for future candidates after his fashion.

An end to superdelegates

Superdelegates are a major structural impediment to insurgent candidacies that are hostile to the capitalist interests of the Democratic Party. In the wake of the 1980 convention, the party introduced the institution of superdelegates so that, “in cases where the voters' mandate is less than clear,” party leaders would have the flexibility to “make a reasoned choice.” So where delegates have to count on voters to delegate them to the convention, superdelegates delegate themselves: Democratic Governors, federal legislators and DNC members totalling 712 people are automatically granted votes at the convention.

Debbie Wasserman-Schultz, the hapless head of the DNC, recently protested that the elevation of party leaders above delegates constitutes an attempt to empower “grassroots party activists” who don’t have to run against politicians with prohibitively advanced electoral machines at their disposal. In actuality, not only are superdelegates on standby to foreclose the possibility of party overhaul in a pinch, they weighed in early so that the corporate media might report them alongside pledged delegates, inflating claims of Clinton’s inevitability.

Superdelegates have got to go—and Sanders should escort them out.

Though the New York primary vote was in mid-April, and campaigning only began a few weeks earlier, the deadline for changing party affiliation to Democratic (a prerequisite for voting in the closed primary) was in October. This effectively disenfranchised many people who only began paying attention to the race when the politicians began vying for their vote. Perhaps an ad or rally or the candidates’ debate inspired an independent voter, and they discovered they were already half a year late to get to vote.

It is crucial for the democratic project that people have the opportunity to vote for the candidate that speaks to them, and that means giving them time to engage with campaigns in their state. If New York’s politicians can switch parties and caucuses at will, voters should be able to as well.

People are sick of the parties. The latest Gallup poll showed party identification approaching historic lows nationally: 29% consider themselves Democrats, 26% Republicans, and 42% as independents. By effectively mobilizing these independents in states with open primaries, Sanders found a way to cobble together a powerful political coalition that was not prescribed by party bosses.

It has been shameful watching liberals defend the conception of political parties as private clubs. Let that be true for Republicans: a “democratic” party should prioritize the enfranchisement of people. It is baldly antidemocratic to want exclude the plurality of Americans from having a say in which two people they are asked to choose between in November.

If there is one thing that mustn’t intimidate socialists, it is the extreme unlikeliness of our victory. In the greatest capitalist nation in history, we have to remain as undaunted as Bernie Sanders, refusing to pass up a single opportunity to advance our cause. Democratizing the Democratic Party is not a revolutionary act, but it could open up institutional space for a revolutionary politics. If this campaign isn’t to attain ultimate victory, that will be a fine legacy.