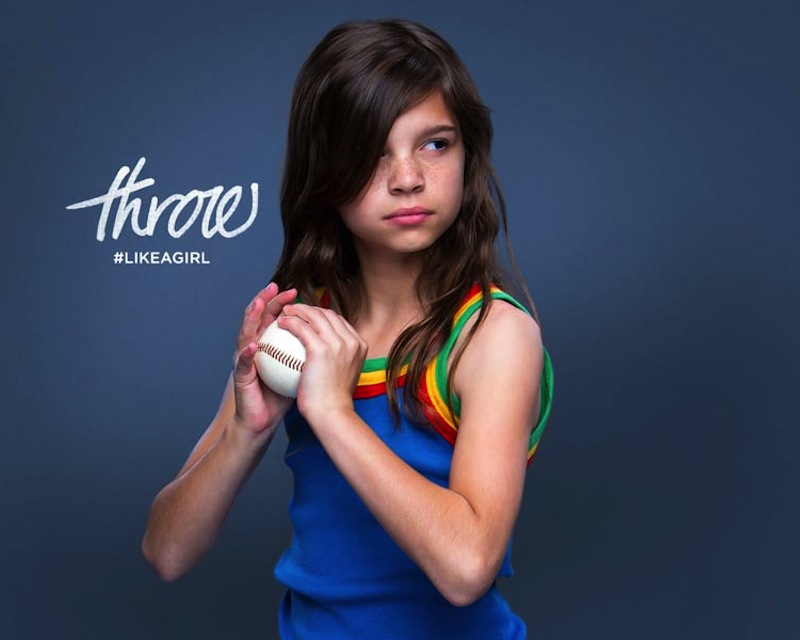 Ads like Always’ #LikeAGirl campaign are boosting profits but not doing much against entrenched inequality. (Image via Always)

‘Marketplace Feminism’ and the Commodification of Empowerment

Andi Zeisler’s new book We Were Feminists Once: From Riot Grrrl to CoverGirl®, the Buying and Selling of a Political Movement takes on corporate exploitation of the feminist movement.

If feminism is so “in” right now, why have state restrictions on abortion rights skyrocketed since 2010?

Feminism seems to have made a big comeback. In Verizon’s 2014 “Inspire Her Mind” ad, a voice issues patriarchal dictates as a girl defies them: “don’t get your dress dirty” as she stomps through a creek and “hand that [drill] to your brother” as she’s building a rocket. The voice intones, “Our words can have a huge impact. Isn’t it time we told her she’s pretty brilliant, too?”

The feminine hygiene product maker Always vows to “[fight] to empower girls everywhere,” while U by Kotex famously featured an ad making fun of all those dumb, white-angora-cat-dominated commercials, with the tagline “Why are tampon ads so ridiculous?” Welcome to “femvertising”: advertising that bolsters brands by embracing the empowerment of women and girls.

Then there was the outpouring of you-go-girl reviews proclaiming Mad Max: Fury Road “the feminist picture of the year” when it hit multiplexes with a ripped, totally badass Charlize Theron as a multi-weapon-wielding hero. You can even get “granny panties”—the supposedly defiant riposte to thongs—with the word “feminist” on the butt. And, of course, there’s the whole Beyoncé-Taylor-Lena-Emma-etc. thing.

The various media and pop culture industries whose bread and butter has rested on making women hate themselves are now not only not insulting them but even celebrating their strength and smarts.

So this is good, right? Well, kinda. Andi Zeisler confronts this head-on in her important new book, We Were Feminists Once: From Riot Grrrl to CoverGirl®, the Buying and Selling of a Political Movement. Zeisler is the cofounder, in 1996, of Bitch Media, publisher of Bitch, a feminist zine-turned-magazine and website that forcefully challenge the sexism and racism of the media, as well as the public attitudes and policies they reinforce, like unequal pay or blaming women when they are raped. So when, over the past two years, feminism became “cool,” Zeisler asked herself why this was bothering her. Wasn’t it a good thing that transgender people were gaining visibility and acceptance, that accusations of domestic abuse and sexual violence on campuses were front page stories, and that Hollaback!, an initiative to confront racist and sexist street harassment, had gone global?

Well, yes. Feminist sensibilities in pop culture do matter. But what Zeisler also saw was the proliferation of “marketplace feminism,” a “cool, fun, accessible identity” that is, in the end, depoliticized. This feel-good, hip feminism is about style, attitudes and words, Zeisler argues, not about confronting “deeply entrenched forms of inequality.” She has numerous examples of the gap between image and reality. She notes how some movie reviewers act as if feminism has conquered Hollywood when a film like Bridesmaids does well, ignoring the fact that in 2014, only 12 percent of the lead roles in the 100 top-grossing Hollywood movies went to women, and that hardly any women get to direct big-budget movies—or, really, any movies.

Zeisler’s book matters because it is nuanced, smart and funny, but most importantly because it reminds us what marketplace feminism occludes. Sure, when the F-word was so recently a dirty one, it can be gratifying to see Beyoncé backlit by the giant word “feminism” and Taylor Swift with her squad of feminist girlfriends. Zeisler does celebrate the fact that this media embrace of feminism has led to changes in public attitudes about feminist issues and has helped to inspire feminist activism, especially online. But if feminism is so “in” right now, why have state restrictions on abortion rights skyrocketed since 2010? Why are women still stuck in the lowest-paying jobs with the worst benefits? Why do we still have no nationally funded childcare?

Because, Zeisler reminds us, feminism is “complex and hard and it pisses people off. … Feminism is fundamentally about resetting the balance of power, and it makes people who hold that power uncomfortable.” Marketplace feminism seeks mainly to “empower” individuals (and brighten up brands), while feminist movements have always been, and still must be, about changing systems and reforming patriarchal power structures. So while Zeisler applauds the “more feminist culture” taking shape, she insists the hard work still remains.