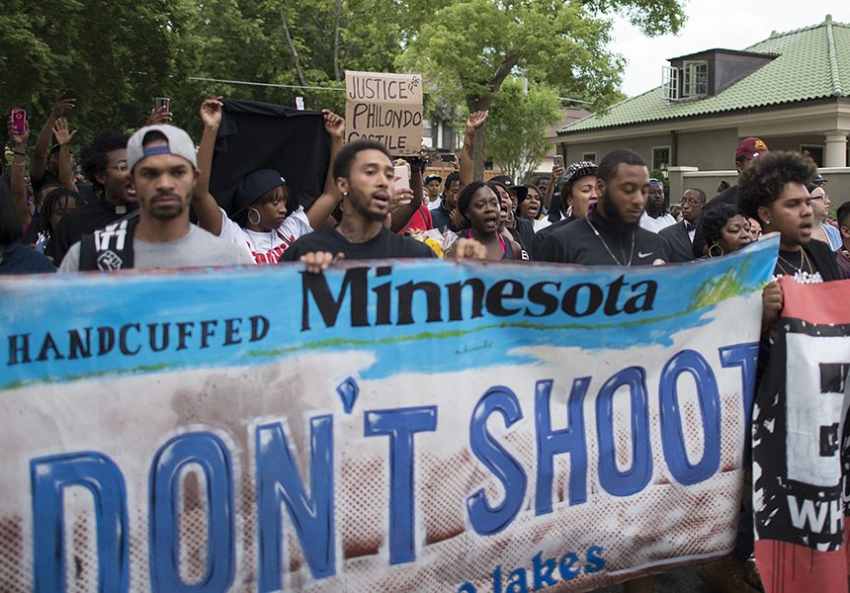 After Alton Sterling and Philando Castile: How the System Punishes Protesters and Protects Police

Police in Minnesota and Louisiana have their own “bill of rights” that can shield officers from accountability for fatal shootings.

“Police, if anything should be held to a higher standard of accountability because of their training, and they have a duty to protect the safety of everyone.”

Hundreds were arrested this weekend as demonstrators took to the streets of major U.S. cities in response to the deaths of Alton Sterling and Philando Castile, two African-American men killed by police last week.

In Baton Rouge, La., where two white police officers tackled the 37-year-old Sterling to the ground and fatally shot him outside a food mart on July 5, at least three journalists and 100 protesters were taken into custody as they marched along a major road on Saturday. DeRay McKesson, a prominent Black Lives Matter demonstrator and co-founder of the police reform effort Campaign Zero, live-streamed his arrest. As officers call out orders to stay out of the road, McKesson tells viewers that the demonstrators are on the shoulder of the road and are not blocking traffic. He then says, “Watch the police, they are just literally provoking people,” before he is arrested. He has since been released.

Dozens more were arrested during protests on Sunday in Baton Rouge. Video shows police in riot gear moving in on a group of protesters who had taken refuge on the lawn of a residential home. The homeowner, who had given the protesters permission to assemble, told a CBS correspondent that she was “stunned” and “angry” that police had stormed her yard to make arrests.

In St. Paul, Mn., where Castile was shot and killed by police during a traffic stop for a broken tail light on July 6, police used tear gas and pepper spray to disperse demonstrators who shut down a section of Interstate 94 on Saturday, eventually arresting more than 100.

While those who film or protest police killings can face harsh sanctions, organizers charge that the killings themselves continue, by and large, to be met with impunity. One underlying factor is a legal system that may effectively shield police from accountability at multiple levels—including through so-called police officer bill of rights laws, which both Louisiana and Minnesota have on the books.

In total, there are at least 14 states with such laws—including Maryland, where Freddie Gray died in custody of the Baltimore Police Department last year after a “bumpy ride” in a police wagon, and Illinois, where in October 2014 officer Jason Van Dyke emptied a full clip into Laquan McDonald as he walked away from police. Campaign Zero and other activist groups have identified these laws, as well as police union contracts granting an extra layer of protections to police, as key roadblocks to police accountability.

Indeed, a recent In These Times review of efforts by the Department of Justice to reform local police departments during the past two decades found that protections enshrined in union contracts and state law have often thwarted efforts to improve the handling of police misconduct, create civilian oversight bodies and establish early-warning systems for problem cops.

State laws and union contracts shape how local governments handle the investigation and punishment of police accused of wrongdoing, among other issues. The laws outline procedures for administrative investigations into whether police officers have violated department policies, often requiring investigators to give police the names of their accusers and the questions that will be asked.

Union contracts, meanwhile, often allow the destruction of police misconduct records, require the withholding of names of officers involved in shootings and grant police steep discounts on punishment even when police chiefs try to fire them, notes Stephen Rushin, a law professor at the University of Alabama who specializes in policing.

“Law enforcement officer bill of rights and union contracts handcuff police chiefs and prevent them in many cases from doing adequate investigations or punishing officers engaged in misconduct,” Rushin says.

Louisiana’s bill of rights has an especially striking provision that drew scrutiny in the wake of Sterling’s death. The The Times-Picayune noted that officers involved in the shooting “have the option of waiting for as long as 30 days before being questioned for their actions, according to Louisiana's Bill of Rights for law enforcement.”

Police union leaders say that these types of protections prevent unfair termination and give officers much-deserved security given the potentially dangerous nature of their work. Proponents suggested that officers might otherwise be fired for political reasons or have their personnel records marred by false complaints.

But critics say that police bill of rights laws effectively create two sets of rules—one for police, and one for everyone else. “Nobody else has the right to put all questioning on hold for 30 days and get a lawyer and work on how they want to frame what it is they have to say,” says Marjorie R. Esman, executive director of the ACLU of Louisiana. “Police, if anything should be held to a higher standard of accountability because of their training, and they have a duty to protect the safety of everyone.”

East Baton Rouge District Attorney Hillar Moore III told The New Orleans Advocate that police were, in fact, interviewed on Tuesday afternoon with their attorneys present and that the officers “believe they were completely justified in using deadly force.” After footage of Sterling’s killing went viral on Tuesday, authorities announced that the Department of Justice would launch a criminal investigation to look for possible violations of Sterling’s civil rights. It’s not yet clear if the interview is admissible to the criminal case against them, or if the feds have interviewed them on their own. Federal civil rights investigators aren’t bound by the same rules as local police departments.

The Minnesota Police Bill of Rights also extends special protections to police during misconduct investigations, including by allowing them to record and review any formal statements they give to investigators—a measure that critics say would help officers “keep their story straight.”

The day after Castile’s shooting, Governor Mark Dayton announced that the Minnesota Bureau of Criminal Apprehension (BCA) had begun investigating the incident. The BCA has previously been accused of pro-police bias, including in the November 2015 police-shooting death of Jamar Clark, after which the county declined to seek charges against the officers involved. The ACLU of Minnesota has called for Castile’s killing to be investigated by a “truly independent entity.”

“We do not believe that the Bureau of Criminal Apprehension is that independent entity because the recent history of the BCA suggests that it is incapable of conducting a thorough and objective investigation into this tragic event,” Charles Samuelson, the group’s executive director, said in a statement.

Activists in Baton Rouge have also previously called for independent investigations to counter a system they view as rigged in favor of police. As the New York Daily News reported, in 2014, the latest year that data is available, the department's internal affairs division investigated 35 complaints about use of force by police and declined to sustain any of them. “The killing of Mr. Sterling did not start the conversation about patterns of discrimination in Baton Rouge,” says the ACLU’s Esman. “It has brought it to a crisis point.”

Adeshina Emmanuel is an independent Chicago-based journalist. He is a former reporter for DNAinfo Chicago, the Chicago Sun-Times and the Chicago Reporter.