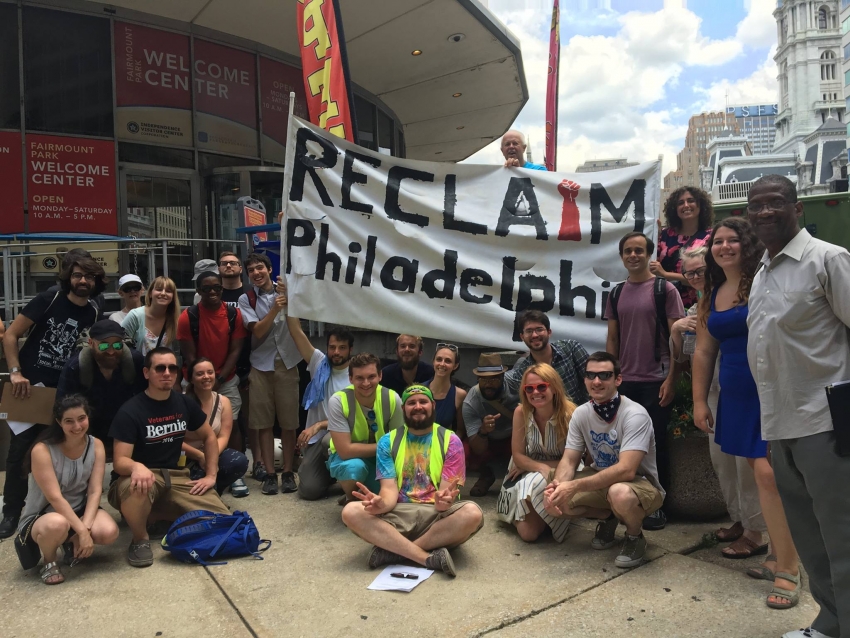 A group of activists in Philadelphia is fighting back.

'The very reason companies don’t want you to know whether they’re supporting parties or conventions is the very reason we need to know that, because we can then connect their support to the influence they have and then it may generate some real calls for reform.'

Since 1947, federal law has prohibited corporate financing of political campaigns and elections, including party nominating conventions. So it might seem more than a little strange that this week’s Democratic National Convention in Philadelphia will be funded by more than $60 million in contributions from some of the United States’ largest corporations, including telecom giants like AT&T and Comcast, oil companies like Chevron and Sunoco and pharmaceutical manufacturers AmeriSource Bergen and GlaxoSmithKline.

This is possible thanks in part to a series of decisions by the Federal Election Commission (FEC) over the past four decades that has all but eliminated the prohibition on corporate contributions to party nominating conventions, according to Larry Noble, general counsel for the Campaign Legal Center, a nonpartisan watchdog group, who also served as the FEC’s general counsel for 13 years.

Convention organizers get around FEC restrictions on corporate political contributions by routing the money through convention “host committees,” nominally independent organizations that are allowed to accept ostensibly non-political contributions from corporate donors. Host committees began as organizations intended to promote the host city and its businesses during the convention, but in recent years they’ve grown to become the primary source of funds for party nominating conventions.

“The Federal Election Commission, starting in the late ‘70s, started writing exemptions into the prohibition. Originally they were small exemptions to allow the host committee to entice conventions there and promote local businesses,” Noble says. “But over time the FEC opened up the rules further and further, until we reached a point where corporations started to provide the vast majority of money used to put on conventions.”

As a result of these loopholes, conventions have become a favorite target for corporate contributions, largely due to the sheer volume of political leaders they bring together under one roof, says Noble. This gives corporations a unique opportunity to impress their message upon many decision-makers simultaneously. For instance, in 2008, Wall Street firms that received bailout money from the Troubled Asset Relief Program (TARP) contributed a total of $6 million to party conventions, $3.4 million for the Republican convention and $2.6 million for the Democratic convention.

“Really what they’re doing is buying access,” Noble says. “The campaigns and host committees know this, and that’s why they offer them access.”

The DNC host committee offers donors a tiered package of incentives for large contributions. Those who give $250,000 or more receive hotel accommodations in the official convention block (putting them in close proximity to delegates and party leaders), invitations to business and policy roundtables and VIP photo opportunities. Donors who give $500,000 get all that and more, including priority access to convention events and venues and a chance to join convention organizers on a VIP golf trip. Top-tier donors—those who give $1 million or more—get what might be the most valuable gift of all: invitations to an exclusive VIP party open only to top donors and party leaders.

But now, a group that includes former Bernie Sanders staffers and volunteers calling itself Reclaim Philadelphia is fighting back against corporate influence in the Democratic Party, starting with this year’s convention. Over the past three weeks, the group has staged demonstrations at the homes of DNC host committee members and even occupied the host committee’s downtown Philadelphia offices calling for the resignations of host committee members with ties to lobbying and the release of the host committee’s financial records, including a full list of donors, which has not yet been made public.

Reclaim Philadelphia is demanding the resignation of three of the 15 members of the host committee—former Pennsylvania Gov. Ed Rendell, Comcast executive David Cohen and Independence Blue Cross CEO Daniel Hilferty—arguing that these members’ lobbying ties and support for corporate interests undermine the credibility of the concessions made to progressives in the 2016 Democratic Party platform.

After leaving the governor’s office in 2011, Rendell has served as co-chair of Fix the Debt, a lobbying organization backed by Wall Street billionaire Pete Peterson that calls for cuts to Social Security and Medicare in addition to a “territorial” taxation system, which would permanently exempt U.S. corporations’ offshore earnings from taxation. Rendell has also served as a lobbyist and consultant for natural gas firms seeking to expand fracking operations.

Cohen, meanwhile, has served as a senior executive at Comcast overseeing government relations since 2002, during which time Comcast has played a leading role in the fight against net neutrality and vociferously backed the Trans-Pacific Partnership (TPP). In 2014, Cohen worked as a fundraiser for Pennsylvania’s Republican Gov. Tom Corbett, raising more than $200,000 for his re-election campaign.

The third member, Daniel Hilferty, is a registered Republican, as well as a board member of America’s Health Insurance Plans (AHIP), an insurance lobbying group that spent $102.4 million in 2009 and 2010 lobbying against the passage of the Affordable Care Act. Hilferty is also a major Republican donor, personally contributing nearly $80,000 to Republican congressional candidates during the 2014 cycle.

“We at Reclaim Philly would like to see single-payer healthcare, but we like that Hillary Clinton has at least re-adopted the idea of having a public option within Obamacare,” says Alex Nagle, spokesman for Reclaim Philadelphia. “But we don’t think the Democratic Party can really make a credible pledge to enact a policy like that when they’re giving this level of access to lobbyists who are really fundamentally opposed to progressive policies.”

“Everyone will have moved on by the time they release the names in October,” Nagle says. “We need transparency now so that we can hold them accountable.”

Arguing against the release of the host committee’s financial records, Cohen told The Philadelphia Inquirer, “People out there have their own partisan agendas and if a company is on there … 50 demonstrators show up outside their offices because 'XYZ bank' invests in fossil fuels or participated in raising money for Republicans. I don't see the public interest in knowing who the donors are.”

But Noble says this is exactly why disclosure is necessary: “The very reason companies don’t want you to know whether they’re supporting parties or conventions is the very reason we need to know that, because we can then connect their support to the influence they have and then it may generate some real calls for reform.”