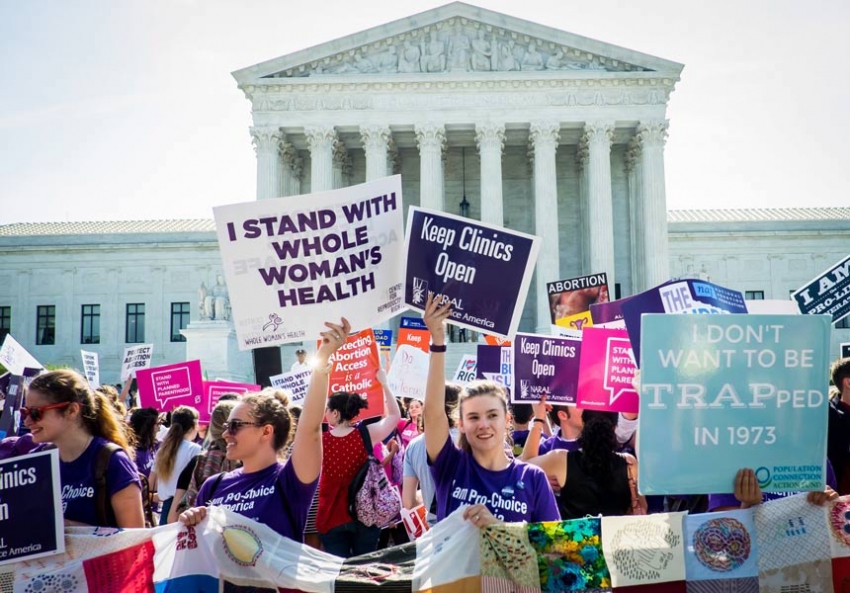 Activists demonstrate on the steps of the Supreme Court on June 27. (Pete Maravich / Getty Images)

Missouri Has Only One Remaining Abortion Provider. Planned Parenthood is Fighting To Change That.

After the courts overturned a restrictive abortion law in Texas, pro-choice activists are hoping to defeat similar legislation in Missouri and elsewhere.

In September, Missouri lost its second-to-last abortion provider. Over 1,000 supporters rallied outside Mizzou’s Speakers Circle in protest, chanting, “Not Mizzou, not the state, women must decide their fate.”

On the morning of June 27, the staff of Planned Parenthood Great Plains (PPGP) waited anxiously, eyes glued to their phones. At 9:05 a.m., the room erupted with emotion—some even crying tears of joy. The Supreme Court had struck down Texas’ House Bill 2 (HB2), an onerous 2013 anti-abortion law that had closed 21 of the state’s 40 abortion clinics and threatened to close at least eight more, ruling that it placed an “undue burden” on women seeking abortions across the state. In one of the most important reproductive rights rulings since Roe v. Wade, the Supreme Court established a legal precedent for repealing restrictive abortion legislation.

But for Lee-Gilmore and Missouri’s two Planned Parenthood affiliates, the work is far from over. While Whole Woman’s Health v. Hellerstedt fundamentally changed the nature of abortion in Texas, the ruling does not apply nationwide. PPGP now joins affiliates across at least eight states using the Court’s ruling to challenge their own versions of HB2, fighting to ensure that the Whole Woman’s Health revolution does not end at the Texas border.

Planned Parenthood has taken a three-pronged approach: In court, in the Missouri legislature and with activists galvanizing public support, they aim to prove that what constitutes an “undue burden” in Texas is an undue burden everywhere.

Whole Woman’s Health challenged two of HB2’s provisions: The first required all doctors performing abortions to obtain the authority to admit patients at a hospital within 30 miles of their clinic. The second obligated abortion clinics to comply with the building standards—including precise corridor widths and procedure room sizes—of ambulatory surgical centers.

Pro-choice activists group HB2 with myriad other Targeted Regulation of Abortion Provider (TRAP) laws passed by conservatives in at least 28 states in recent years. TRAP laws, they argue, were never intended to protect women. They are intentionally designed to put abortion clinics out of business.

They are often successful. Unwilling to entangle their institutions with controversial politics, many hospitals deny admitting privileges to abortion providers. Stringent structural standards require clinics to bulldoze and entirely rebuild their offices.

The Court disagreed, ruling 5-3 in favor of lead plaintiff Amy Hagstrom Miller. Justice Ruth Bader Ginsburg, in a concurring opinion, refuted Keller’s testimony, noting “many medical procedures, including childbirth, are far more dangerous to patients, yet are not subject to ambulatory-surgical-center or hospital admitting-privileges requirements. … When a state severely limits access to safe and legal procedures, women in desperate circumstances may resort to unlicensed rogue practitioners … at great risk to their health and safety.”

The burden is palpable in Missouri, a rightwing state that has long prided itself on limiting abortion access. In 1986, Missouri became the first state to adopt the admitting privileges requirement, which has since spread to 11 other states. Missouri is a “breeding ground” for anti-abortion laws, says Lee-Gilmore. “They pass them here, then you start to see them spider out, like a spiderweb.”

A report from the Institute for Women’s Policy Research names Missouri the seventh-worst state in the nation for reproductive rights. “It’s all meant to be political statements and to punish women,” says Missouri state Rep. Stacey Newman (D). “These bills that they file are harmful. They’re very harmful.”

In September, Missouri lost its second-to-last abortion provider. Under intense pressure from state Sen. Kurt Schaefer (R) and other conservative lawmakers, the University of Missouri voted to revoke Planned Parenthood Dr. Colleen McNicholas’ admitting privileges at its on-campus hospital, forcing the Columbia, Mo., clinic to stop providing abortions. Over 1,000 supporters rallied outside Mizzou’s Speakers Circle in protest, chanting, “Not Mizzou, not the state, women must decide their fate.”

“The burden [has] increased on providers ever since we” stopped offering abortions, says Lee-Gilmore. “When we were doing medication abortion in [Columbia] last summer … every appointment on that schedule was filled. That just shows you the need that exists.”

Rep. Newman, joined by Sens. Jamilah Nasheed (D) and Jill Schupp (D), has already pledged to file anti-TRAP legislation. But given the entrenched conservatism of the Missouri legislature, the winning battle will most likely be judicial.

Lee-Gilmore predicts that Planned Parenthood will release a plan for legal action in the coming weeks.

“We have talked to a lot of patients who never stopped to think about it, never paid attention to the current abortion restrictions until they needed an abortion, and then they understood how restrictive and how difficult it was,” she says.

“The highest court in the land made it very clear,” says Lee-Gilmore. “These laws are medically unnecessary [and] they put an undue burden on people who are seeking abortion. … I am very confident that we will find our way back to expanding abortion access in our state.”