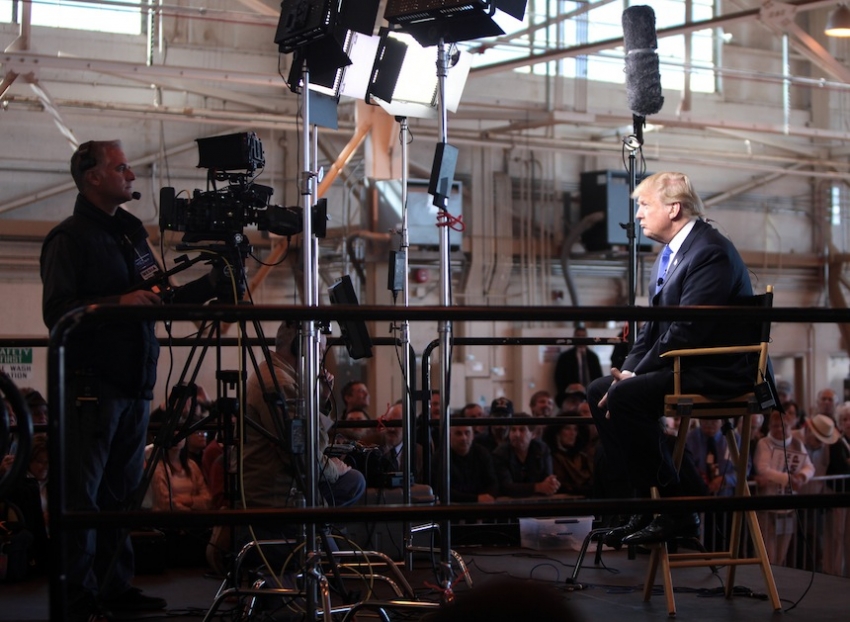 Donald Trump is interviewed at the Mesa Gateway Airport in Arizona in December 2015. (Gage Skidmore / Flickr)

Trump can’t reboot his campaign unless the press reboots it for him.

The mainstream media thrives on equivocation and equalization. It is, I suppose, what they think distinguishes them from right- and left-leaning websites and Fox News, and it is, I suspect, less the result of any sense of public obligation than it is a form of self-congratulatory piety.

“Can Donald Trump Rebound?” asks the New Yorker’s John Cassidy in his Monday blog post, posing what seems to be the pressing question now. Cassidy assumes, like nearly all analysts, that it is a political question—basically, “Can Trump get the funds, the TV buys, the infrastructure, the party unity, and last but by no means least the pivot from abnormality to normality that would allow the Republican nominee to close the ever-widening polling gap with Hillary Clinton and compete?”

But the media are being more than a bit disingenuous in their dissections. This isn’t so much a political question as it is a media question, which is to say that the media may hold the answer, not Trump. Even the question itself has a media predicate—namely, that Trump can make everything he has heretofore done and said disappear and then begin anew. You can’t do that unless the press lets you. You can’t reboot your campaign unless the press reboots it for you.

So whether Trump can win this election may be less in his hands than in the media’s. And that is not particularly a good thing if you think that Trump is a danger to the country. This is why: The media have a stake in resuscitating Trump’s campaign or damaging Clinton’s. Don’t be surprised if they try.

Call it the “media bounce” if it boosts Trump, or the “media dip” if it hurts Clinton.

Even while lavishing attention on Trump and giving him largely positive or neutral coverage in the run-up to the primaries, the mainstream media—a good many pundits and even a handful of reporters—have been less than flattering since then. The media seem to adore Trump as a subject, a political train wreck that keeps roaring down the track and flattening more things, because train wrecks are good copy and good TV. At the same time, the mainstream media seem to fear the prospect of Trump as president.

Jim Rutenberg’s media column in Monday’s New York Times is an example of the kind of soul-searching some journalists are undertaking, and the kind I don’t recall ever seeing before in mainstream publications. Rutenberg asks whether the media have an obligation to toss aside their so-called neutrality and reveal Trump for the charlatan, demagogue and truth-twister he is, or whether they should continue to treat him as if he were an ordinary candidate. Brian Stelter on this past weekend’s Reliable Sources on CNN asked a similar question about Trump’s charges of a rigged election, even though CNN is one of the worst offenders in aiding and abetting Trump, and even though they put Trump apologist Jeffrey Lord and former Trump campaign manager Corey Lewandowski on their payroll. Earlier the Columbia Journalism Review called for a “Murrow moment” in the coverage of Trump, referring to the way Edward R. Murrow called out Sen. Joseph McCarthy on CBS.

Trump has always been sanguine about these attacks. His operating principle is that all publicity is good publicity, and he crows that he is gaming the media into giving him free attention and thus boosting his candidacy. As Greg Sargent observed in The Washington Post last week, it hasn’t exactly turned out that way. Some publicity is so bad that it can damage a candidacy, especially if it dominates the airwaves and print—to wit, Trump’s squabble with the Khans.

But as a recent report on election coverage from Harvard’s Shorenstein Center shows, after receiving that positive coverage during the “invisible primary” before the actual voting, Trump’s coverage went negative during the primaries. So he has been getting negative coverage for quite some time now—61 percent to 39 percent negative in the last five weeks of the primary season—without it seeming to do him any real harm. In fact, his poll numbers kept climbing throughout.

Still, even as Trump has hit a series of post-convention potholes that clearly have depressed his numbers, there is some reason to think that the potholes could actually turn out to be just speed bumps as far as the media are concerned. In the first place, while the mainstream media may have a greater sense of responsibility in the general election than the primaries, as Sargent posits, they nevertheless thrive on equivocation and equalization. It is, I suppose, what they think distinguishes them from right- and left-leaning websites and Fox News, and it is, I suspect, less the result of any sense of public obligation than it is a form of self-congratulatory piety: We don’t take sides. So what happened last week—for the press to criticize Trump without an equal blast at Clinton—is actually a deviation from the norm, which also means that they are likely to return to the norm and be either less critical of Trump or more critical of Clinton. Think of it as a course correction. Either way, it could help Trump.

But there is another media predilection that could work to Trump’s advantage: the horse race. No one needs to be told that nearly all election coverage now is about who is winning or losing. According to that Shorenstein study of this year’s primaries, 56 percent of the coverage was horse race, only 11 percent substantive, with the rest about process. We may think this is just a matter of emphasis. But it contributes to shaping the entire contour of the election. Because here is the thing about horse race coverage: the media want to keep the race tight, even when, as in the current situation, it isn’t.

If you’re a sports fan, you know that nothing is more yawn-inducing than a blowout—and that is true not just for viewers, but for broadcasters as well. It sends them rummaging to the trunk of anecdotes. That’s because journalists want to be engaged just as much as fans do by the action on the field. It’s good for business. It’s good for one’s own mental state too.

That may be why nearly every losing major party candidate in the general election over the last three decades has either gotten a bounce or has seen the leader suffer a dip. It’s not necessarily because losers suddenly gain steam or leaders suddenly lose it. It is because the media, either through a desire to show their fairness or a desire to keep the campaign entertaining (or both), will begin to manipulate the coverage. In 1980, despite doubts about his gravity, Reagan eventually was depicted as presidential, coming from behind to win convincingly. As the election wore on in 1988, leader Michael Dukakis became a fool atop a tank. In 1992, Clinton’s huge post-convention lead dissipated from nearly 25 points at one time to 6 in the final vote under withering media scrutiny of his character. In 2012, Romney got a bounce when the media declared him the winner of the first debate and started talking about a close election.

It isn’t hard to imagine the media driving a narrative of a “new,” more disciplined Trump, or of a more presidential Trump if he stays on script or doesn’t go on the attack during the debates, or of a Trump catching the populist tide. It is already starting. See CNN’s favorable coverage of Trump’s economic speech.

The idea is to close the gap and give us a good game – a game we will continue to want to watch, and that the media will want to report. The reasons for the bounce are nearly irrelevant. As Trump campaign manager Paul Manafort put it, “We’re comfortable we’ll get the agenda and the narrative of the campaign back on where it belongs.” Exactly. The narrative.

But there is one way in which Trump, who relies on the media even as he eviscerates them, could injure himself, and it is unique to him. If the media have historically tightened the race primarily to heighten its entertainment value, what happens when a race is already loaded with a different sort of entertainment value? With his nonstop flubs, squabbles, explosions, exaggerations, lies and outrages, Trump has been providing a huge media show, his position in the race notwithstanding. For traditional politicians, the media had no alternative but to whip up game tension. Trump whips up lunacy all on his own. Essentially, his shenanigans eclipse the horse race.

Show business can beat traditional politics. It did in the Republican primary. But only if the media play along. In continuing to make a spectacle of himself, Trump has begun to frighten the very reporters who gave him a free pass, and given them another option from having to provide that bounce or dip. He might just cement his loss in the bargain.

Neal Gabler is an author of five books and the recipient of two LA Times Book Prizes, Time magazine's non-fiction book of the year, USA Today's biography of the year and other awards. He is also a senior fellow at The Norman Lear Center at the University of Southern California, and is currently writing a biography of Sen. Edward Kennedy.